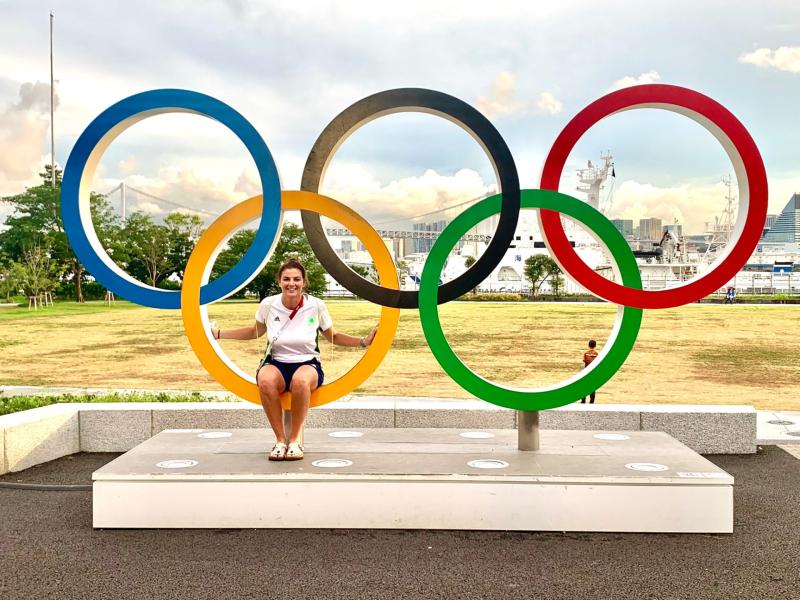 Sport and Excercise lecturer at Waterford Institute of Technology, Dr. Ciara Losty, has shared her experience of working at the Tokyo 2020 Olympic games as part of Team Ireland staff.

Having worked with various athletes in the build-up to the Games, which were postponed for a year due to the pandemic, Ciara travelled to Tokyo to offer wellbeing and pastoral support in the aftermath to those who had competed for Ireland.

Speaking about the experience, Ciara said: “The main sports I work with at the moment are equestrian eventing, three-day eventing, I work with a sprinter, and I work in modern pentathlon as well.

We were all cheering here in equestrian park, bursting with pride. An inspirational performance for #TeamIreland #EquestrianEventing #TokyoOlympics ☘️☘️ pic.twitter.com/LemP5y2SDZ

Ciara, who is currently on the MSc Psychology Conversion course part-time at Wrexham Glyndwr University in Wales, said the ongoing pandemic and restrictions in Tokyo meant there were even more challenges for athletes and staff to contend with, including lack of socialising with friends and family, and performing in near empty venues, which Ciara – who had previously been to the 2012 Olympic Games in London with Team Ireland in a similar role – said made it a very different experience.

“I know what it’s like because I’ve been to other Games, what it’s like when the crowd is there, the buzz, the atmosphere, your family”, she said. “Nobody had family or friends there, nobody could be meeting up for coffee, it was so clinical, it’s about understanding the emotions of what they’re going through at the time.”

Dr. Losty emphasized the importance of her role and how some athletes needed that support.

“We see all the good stories on TV, but some athletes may have been disappointed with their Olympic experience or performance, so they would have a check-in with me on the ground in Tokyo within 48 hours whether it was via Zoom, or in person.

“I’m interested in the person first, athlete second, it’s not a formal performance debrief – they would have that with their performance coaches – it’s more about wellbeing.

“We’re working with that age group of people who are probably starting families, settling down, late teens to late 20’s – to bridge that gap, be that contact for them. Sometimes it’s difficult to reach out for support, so I’m that ‘go to’ person".

“There are 134 eligible athletes from Team Ireland and I will either meet them to offer support or do it online, and help them transition to maybe the next cycle for Olympians, or maybe if it didn’t go too well they need some clinical type of support,
they could need financial support, they could be going back to college.

And that’s a wrap #Tokyo2020 privileged to have shared this experience with @TeamIreland - hard work, grit, process and years of work gone into each and every athletes performance pic.twitter.com/m9I2abrJ51

Having enjoyed such a good experience when studying for her PhD at Glyndwr University, Ciara says she had no hesitation in returning to the University when she sought to enroll on a conversion course.

“My primary Degree is in Sports Science, I did a Research Masters in Sports Psychology, and then I actually did my PhD at Glyndwr”, she said.

“I had a really positive experience at Glyndwr. That was five or six years ago, so I’ve always kept an eye on the University as an alumni even though I’m in Ireland, and the one piece that was missing for me from an Accreditation perspective was the
BPS component because I don’t have an Undergraduate Degree in Psychology, even though I had a PhD.

“When I was looking at the way different courses are structured here (in Ireland) it’s more flexible for me to go to Wales where there are those types of programmes than here where it’s two or three evenings a week. Because I’m based in the south-east
of Ireland in Waterford, not in Dublin, it would be a two-hour drive two nights a week which is not going to happen with a family.

“The flexibility of it going online, the content is great. I’ve always felt really supported, you get one-to-ones, the smaller class sizes mean you get to know people, that support is amazing. It’s made me think about how I deliver things as a lecturer and the support I give others as well.”