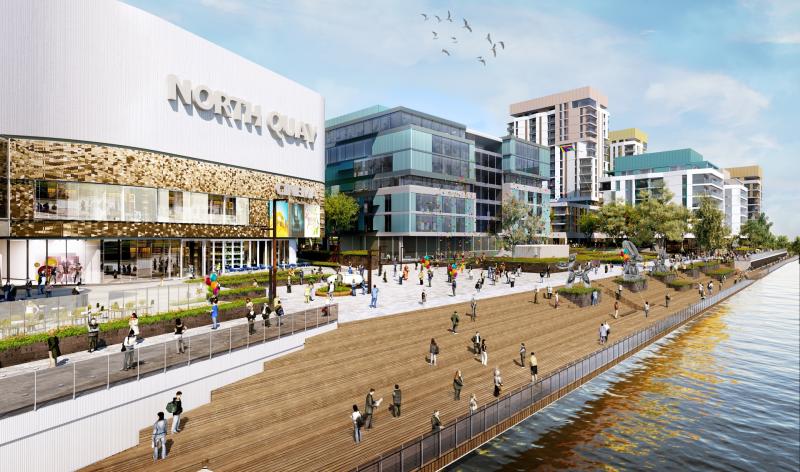 Waterford North Quays is a project of Falcon Real Estate Development Ireland, which will be central to unlocking the potential of communities in the region and delivering a better quality of life for all. In doing so, the project will regenerate and re-ignite the regional economy and create a better future for the next generation, in a sustainable manner, therefore fulfilling much of the Government's ambitions in its new programme for government.

“We are delighted at the decision of Waterford City and County Council to grant full planning permission for the North Quays SDZ project. This is the culmination of four years of hard work with a significant effort made by many, but particularly the community and stakeholders of Waterford and the South East itself,” Falcon Real Estate Development Limited director Rob Cass.

North Quays is over eight hectares of urban regeneration on the south-facing 1km historic quayside waterfront in the centre of Waterford city. The site consists of a sustainable transport hub and will be the largest mixed-use real estate development in the South East of Ireland’s €18 billion economy for the 603,000 people living in the region's 60-minute catchment. The exciting project will see a new city-centre skyline emerge for Waterford city centre.

“The North Quays redefines a new and exciting vision for the city, supporting and enhancing a vibrant public realm, and kicks off a very exciting decade ahead for Waterford and the South East region as the delivery of North Quays sees the potential of the city-region start to be unlocked as a destination for people across Ireland and beyond to come and experience," Mr Cass said.

"We hope the community will take great pride in turning these plans into reality as we enter the next phase and we’ll be undertaking significant community engagement events in the forthcoming weeks and months.”

The total combined estimated private and public investment in North Quays is over €500 million, with the North Quays development delivering nearly 2,900 full-time jobs on the development itself by 2023, primarily in the offices aspect and secondarily in the services sectors, and a further 4,500 indirect jobs in the community. The development is the culmination of partnership with local authorities, state bodies and government departments that see North Quays act as a catalyst to unlocking overdue funding for Waterford and the South East.

The North Quays development will benefit from over €139 million of public infrastructure funding, is unlocked by over €350 million of private investment up to 2023 which sees over €272 million returned to the exchequer in the build phase, and upon opening will deliver a net annual benefit to taxpayers of over €107 million a year. From 2018 to 2030, the taxpayers benefit will amount to almost €1.25 billion. This equates to €8 returned per euro of taxpayer fund outlay, acting as a model of how sustainable regenerations can unlock both exchequer and importantly how public and private sectors combine to unlock significant social and economic benefits for the community.

The economic impact of the build phase is over €130 million each year in the construction phase from 2020 to 2023 and then €277 million a year once the development opens in 2023, adding 7% growth rate to Waterford’s economy and 1.5% to the wider South East’s economic growth rate, plus reducing unemployment in the county by 22% and in the region by 12.5%.

“In getting to this vital milestone, we would like to thank the community for their submissions and inputs to plans, our development team, commercial and funding partners, local authorities, state bodies, and government departments for their extremely hard work and collaboration in making one of the most important projects in Waterford and South East’s history,” Mr Cass added.

Subject to the confirmation of the  Department of Housing, Local Government and Heritage (or other relevant agency) for the funding of the infrastructure happening before the end of August, Falcon Real Estate Development is purchasing the whole of the North Quays site from Waterford City and County Council, and then will immediately commence both further commercialisation and in parallel, detailed design and contract award to general contractors.

Construction work on the podium and piling aspect of the site itself is targeted to start by Christmas 2020 in tandem with the Government infrastructure programme plan that has already begun on the roads, with the bridge and rail programme due to commence upon funding confirmation from the Government.