Trip to Old Trafford to watch Manchester United on the cards 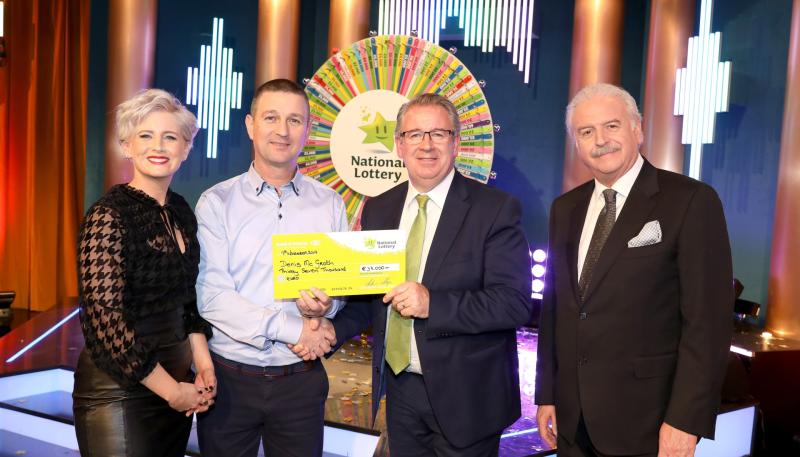 A night porter from County Waterford went on a Winning Streak of his own and won prizes totalling €37,000 on the National Lottery TV game show Winning Streak on RTÉ One last Saturday.

Denis McGrath who comes from Dungarvan got his Winning Streak game off to a flier, winning the Electric Dream game and the Renault Zoe electric car worth €25,000 that comes with it. He went on the win a further €12,000 in cash from the show.

On the show, Denis said that when he was watching Winning Streak the week before and completely forgot that he had sent in a scratch card with three stars. When his name was called out, he admits to being speechless and was “stuck to the couch with the shock."

His wife and friends had just come into the house from Mass and he eventually gathered himself to tell them and great excitement ensued. However, the celebrations were short lived as he had to go to work as the night porter in Aras Brugha Youth Hostel in Dungarvan. He has been in that job for four months now, having spent years before that working in the construction industry.

Denis is Dungarvan born and bred and the town has had a bit of luck on the TV game show as another local woman, Anita Lakner, won €27,000 on the show four weeks ago. Denis left nothing to chance and even booked the same bus driver as Anita’s gang.

Denis has been married to Jacqueline for the past five years, but the couple were together for 21 years before that. They have three sons: Denis Jr (24), Seanie (18) and Adam (9), all of whom cheered their dad on from the audience last Saturday. They were joined by other members of family, including his sisters Bernadette and Eileen and other friends.

In his spare time, Denis loves to relax by fishing in the sea off Waterford and says there are fewer better things than fishing in the Sunny South East during the summer. He also likes sport and goes to a lot of Dungarvan GAA hurling and football matches. He used to play a bit in his day and was a corner-forward for Dungarvan. His sons like Premier League soccer so with his winnings he says a trip to Old Trafford to watch Manchester United is on the cards.