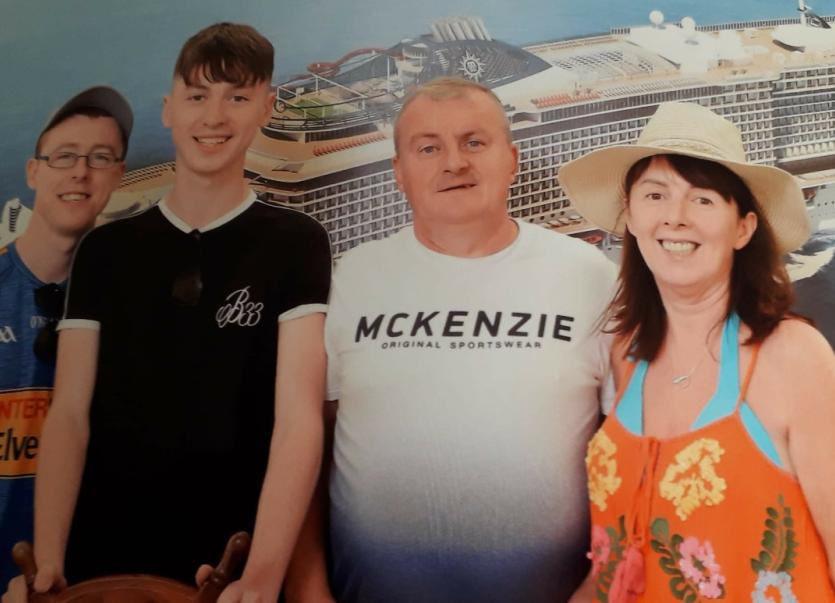 The Harris family from Carrick-on-Suir in Miami before Sharon became ill mid-flight en route to Dublin.

A Carrick-on-Suir mother is recovering at home after taking a life-threatening turn for the worst on board an Aer Lingus flight from Miami.

Sharon Harris McGrath was returning home from a family trip of a lifetime with her husband Patrick and sons Dean (23) and Zac (16) when she started to feel sick five hours into the flight to Dublin.

Having spent a blissful few days in Miami and a week on a cruise around The Caribbean, Jamaica, The Cayman Islands, The Bahamas and Mexico, the family were left “traumatised” by what unfolded in mid-air.

“It was gorgeous. We spent two years saving for the holiday. I had never went on a long-haul flight before and was really looking forward to it,” Sharon tells Waterford Live.

“I wasn’t sick on the holiday or before I got on the plane. I had something to eat, fell asleep and when I woke up I felt nausea coming on and my throat was closing in. Then I got sick and started shaking, and straight away an air hostess was beside me with a sick bag and looking after me. When I didn’t stop shaking she made a call to see if there was a doctor on board. A doctor from Belgium and a nurse from Asia were on the flight - they put me on a drip and oxygen and checked my blood pressure and temperature.

“I never had a seizure before and the one I got was very serious. It was an ongoing seizure where the body doesn’t recover called status epilepticus. The doctor and the nurse were assisting me and when they saw that I wasn’t stabilising the pilot decided to make an emergency landing. The plane turned back and landed at Gander in Newfoundland.

“It was only when I got to the hospital that they could break the seizure. They had to knock me out and relax the body.

“My family were terrified. It was a traumatic experience. They really thought I was going to die because I was slipping in and out of consciousness,” Sharon continues.

Sharon spent nine days in a critically ill unit in Newfoundland. Her husband and youngest son had to return home after her father-in-law got hit by a car in Carrick-on-Suir and was also left in a critical condition.

“The health system over there was simply amazing. They were the nicest people I ever met in my life. They were so kind, were always smiling and making sure I was ok - it was unbelievable! A priest came in to see me in the hospital and anointed me. We literally only had the clothes on our backs and he went and got a social worker just in case we needed anything.

“Then we got a call to say my husband’s father had been hit by a car at home and was critical. My husband and youngest son went home and my other son stayed with me. Thank God both of us are alive now," Sharon says.

Sharon believes the treatment she received from the Aer Lingus air hostesses before getting medical attention saved her life. “They were truly amazing. They kept the whole situation calm and kept all the passengers calm. They got bottles of water for my husband and the boys and reassured them that paramedics were on the ground. They told us that the best doctors in the world would look after me and that I would be in safe hands,” Sharon adds.

Sharon is continuing to undergo further tests to determine the underlining cause of the episode. “I’m doing well and to be back in my own bed is half of it. Home comforts! At least it didn’t happen on the flight over because we wouldn’t have got any holiday then,” Sharon laughs.