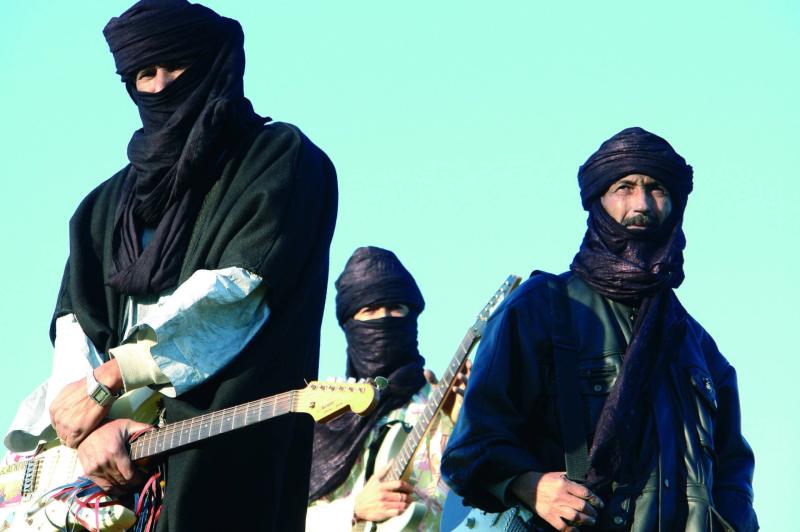 Terakaft who will play this year's Imagine Arts Festival in Waterford

On Thursday evening October 25th 10-piece street-funk band Stomptown Brass and Collapsing Horse, the most exciting young theatre company in Ireland will host a funeral for the Truth at Christchurch Cathedral in Waterford City. Witness the colourful exuberance of the Haitian Voodoo-inspired New Orleans jazz funeral as it smashes up against the mournful, solemn ceremony of Roman Catholicism. An extravagant, chaotic street party, with a dark twist.

On Saturday, October 27th, Terakaft (meaning The Caravan), all the way from Mali, will take to the stage at St. Patrick’s Gateway. These pioneers of desert rock, are a Tuareg band featuring founding members of Tinariwen. The tuareg guitar - a looping groove, melancholy tune, a simplicity and a profundity - that called to mind the masters of the Delta, the spirit and defiance of the early Wailers, with a desert flavour between Gnawa trance and Ali Farka Toure’s serpentine swing’.

On Sunday evening October 21st Seamus Fogarty will host an evening of folk music at St. Patrick’s Chruch. Recently been nominated for an RTE Folk Award and his most recent album The Curious Hand is described by Q Magazine 'an album of modern folk songs embroidered with bursts of electronica', and featured on most of the knowledgable end-of-year lists in 2017. This gig will be opened by Shane Barry who has just finished his new album, The Night Post which is packed with Wilcoesque, hook-laden tunes and catchy choruses.

On Wednesday, October 17th the world famous Harlem Gospel Choir synonymous with power vocals, glorious sound and infectious energy will perform at The Theatre Royal in Waterford. For over two decades they have been America's premier gospel choir and have toured the globe thrilling audiences with the inspirational power of black gospel music. Also on Wednesday, October 17th experience the magic of the multi-award winning Amatis Piano Trio as they present a programme of chamber music by Haydn, Schumann and Mendelssohn, along with a newly commissioned work by Irish composer, Amanda Feery. For the 2018/2019 season, the trio has been selected as "Rising Stars" by the European Concert Hall Organisation, which will see them perform in 23 prestigious concert venues across Europe.

Two new albums will be launched at the 2018 Imagine Arts Festival, Eric Sweeney launches Bright Seraphin, a CD of his organ music as part of Imagine played on the magnificent Kenneth Jones organ at Christ Church Cathedral. Bright Seraphim presents a range of his organ compositions, some new some old, together with an improvisation showing off the range of sounds and colours of Waterford’s finest organ. And Bird of Burden launch "A conspiracy of dust" with sounds ranging from driving high tempo rock to meandering hypnotic airs which interlace to frame a highly personal, almost diary-like lyrical content, firmly anchored in the folk ballad tradition.

Other music events at Imagine include a reunion of the much celebrated Castle Ceili Band who were trailblazers back in the early 60’s and a celebration of music from the Deise, all part of the exciting John Dwyer Trad Weekend. Performances from The Three Degrees and the Hibernian Orchestra Waterford plus Vinyl Friday and Classical guitar with Shaun Walsh along with a variety of music events set to take place for the throughout the pubs called Choons and Tales over the bank holiday weekend.

The 10-day Imagine Arts Festival in Waterford, which takes place from October 18th to October 28th promises an exceptional programme for everyone to enjoy. The 2018 festival is an exciting multi-disciplinary series of events that promote the best of local arts mixed with top national and international work. Some festival highlights include the inimitable Spraoi’s latest production ‘Wicked Woods’; Waterford Youth Arts’ ‘Horribly Historical Trails. The Waterford Writers Weekend this year which will be hosted by RTE’s Rick O’Shea and features interviews with some of Ireland’s leading literary luminaries including Authors John Boyne and Cecilia Ahearn.

A rare live recording of RTE’s Sunday Miscellany which celebrates 50 years this year; David McSavage’s new show ‘A Terrible Want’ and a Mayoral reception for esteemed Irish filmmaker and Waterford native George Morrison featuring screenings of his movies including the powerful and iconic ‘Mise Eire’ plus the biggest flour fight to ever take place as clans of Vikings and festival-goers prepare for ‘Blaa-Mageddon’ plus lots more.

The Imagine Arts festival is packed with over 130 acts & performances for all tastes and ages, join in the fun this October in Waterford from the 18th to 28th – see Imagineartsfestival.com.