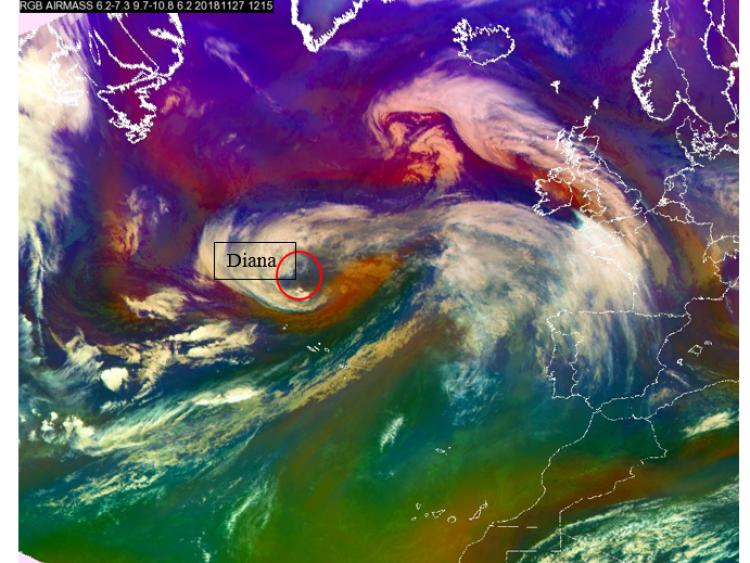 Satellite view of Storm Diana in the Atlantic.

Met Éireann's weather update on Storm Diana says it will produce some severe and potentially damaging winds as it moves northwards to the west of Ireland on Wednesday.

In her meteorologist's commentary, forecaster Liz Walsh said the cool easterly airflow which persisted for much of last week has now given way to a much more unsettled but milder Atlantic regime.

"It’s a complex set-up out in the Atlantic at present with several low-pressure centres and frontal waves in the mix. The first active period of weather from one of these low centres, which produced very wet and windy conditions for many on Tuesday morning the 27th November, has cleared and there will be a lull in the weather through the rest of Tuesday before the next system arrives.

"This next low-pressure system carries (and will keep) the name of Storm Diana. It was named by the Portuguese Met Service due to the orange level warning conditions it produced for the Azores archipelago on the evening and night of Monday the 26th November. Storm Diana will produce some severe and potentially damaging winds as it moves northwards to the west of Ireland on Wednesday and a number of warnings have been issued in relation to this event.

"A yellow wind warning has been issued for the 26 counties that we have responsibility for. Winds are expected to reach mean wind speeds of 55 to 65km/h and gusts of 90 to 110km/h. Additionally, two orange level wind warnings have been issued for the southern and western coastal counties of Cork, Kerry, Waterford, Wexford, Clare and Galway to warn of the potential for orange level winds – mean speeds of 65 to 80km/h and gusts of 110 to 130km/h. These orange level winds will mostly occur in coastal regions of these counties and about high ground and there is also the added risk of coastal flooding due to very high seas.

"Accompanying the wind, some heavy rainfall as well, with Connacht and west Ulster likely to bear the brunt of the wettest conditions," concluded the forecaster.