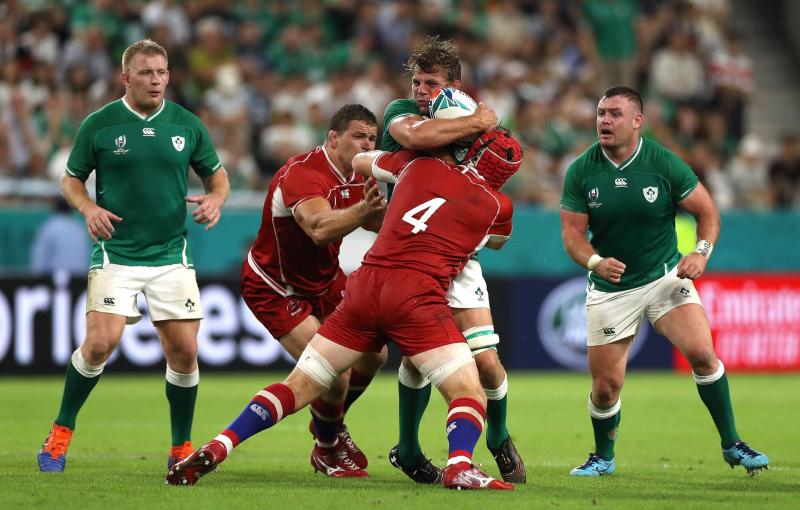 Jordi Murphy in action against Russia

For Jordi Murphy, the Ireland back-row forward, the last month has been a rollercoaster ride.

First came the crushing disappointment of narrowly missing out on Joe Schmidt’s 31-man squad. Then came a welcome phone call, followed by a flight to Japan after an injury to the unlucky Jack Conan. But 26 minutes into the game against Russia, it looked like Murphy, above being tackled, might be going home almost as quickly as he had arrived.

After being one of Ireland’s best players in the first quarter in Kobe, the 28-year-old was forced off with a rib injury. "I got caught between two people," he recalled on Monday.

"One of them might have been (second-row) Jean Kleyn and the other was one of the Russian second-rows - so it was never going to end well for me.”

Murphy was enjoying a pre-match coffee in the Belfast cafe owned by his Ulster team-mate Rob Herring when he was first alerted that he might be summoned to Japan.

"A couple of hours later I was flying over here," he said.

"I was delighted to be able to play last week. Obviously it was a bit short-lived but the damage isn’t too bad so I’m hopeful that I’ll get another opportunity at some stage in this tournament to help out the boys."

The versatile Murphy has had more than his share of ups and downs – he scored Ireland’s first try in the historic 40-29 defeat of New Zealand in 2016, but damaged his ACL to his knee later in the game.

After popping a rib against the Russians, he played on in obvious distress for about five minutes while feeling "incredibly disappointed" at his misfortune, before being unable to continue.

"I tried to play on but I knew that I wasn’t adding anything to the team and it’s not the kind of place you want to be. You want to be adding things to the team the whole time, you don’t want to feel like you’re not keeping up with everyone else."

From that low Murphy has bounced back and hopes to be available for Saturday’s final Pool A game against Samoa.

"I didn’t really know what the final diagnosis was going to be but it’s been positive so far so I’m just building into this week and hoping that I’ll train fully on Thursday," he said.

"I’ve been assured by doctors and through scans that nothing is too out of place or not functioning well enough, so I should be all right. I trained a little bit today and I’m hopeful of training fully on Thursday, so if selected it would be amazing."

The squad enjoyed a weekend off and Murphy, who hopes to add to his 30 caps in his second Rugby World Cup, said the mood in the camp is strong again after two lacklustre performances.

"That’s probably the best thing that could have happened to the group – a couple of days off to clear the head, especially in a tournament where it’s just rugby 24-7. I really noticed that today when I was watching on at training – the energy and desire from all the boys."

Murphy’s eye-catching performance when fresh off the plane suggested that he may yet have an influence on the rest of Ireland’s tournament.