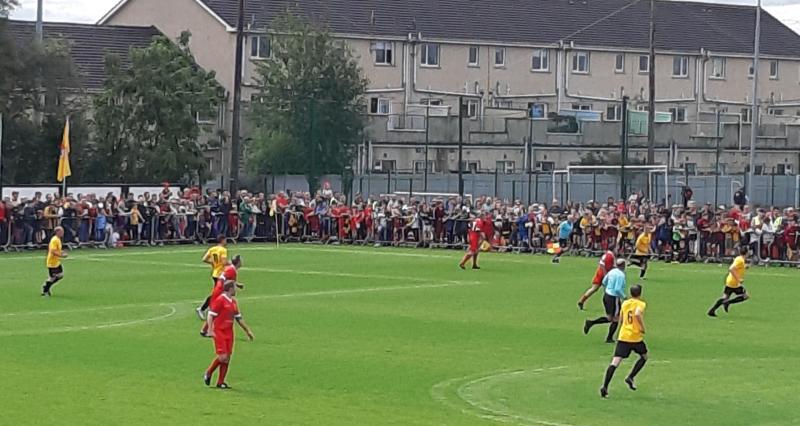 A CROWD of more than 2,500 turned out on a sun-kissed afternoon to watch the Liverpool Legends role back the years in their special fixture against Aisling Annacotty in Annacotty on Saturday afternoon.

Republic of Ireland internationals Jason McAteer and Ronnie Whelan lined out alongside the likes of multiple league and European Cup winner Alan Kennedy and recent Anfield Road favourite Jermaine Pennant in a Liverpool Legends side which was managed by their former Danish midfield maestro Jan Molby.

Liverpool Legends and Aisling Annacotty played out three very entertaining periods of 30 minutes each which produced plenty of goals, much to the delight of the enthusiastic support.

Jan Molby told the Limerick Leader: "This is about a special occasion, maybe reliving a few memories as far as the fans are concerned and for the younger generation of Liverpool fans to see some of the old boys.

"But the main thing in the end was it has been a very successful day. Obviously Aisling Annacotty have built themselves lovely facilities here and that work came to fruition today with a full house and some goals for everyone to enjoy.

"The level of support for Liverpool is incredible. It doesn't really matter where you go. With Liverpool, the club is so well supported.

"From my point of view, I haven't played for years and to be fair I haven't managed them either. This is the first time I have been involved with this side for six or seven years."

Former Republic of Ireland midfielder Ronnie Whelan added: "It has been great. Everything about the day has been great. The organisation has been first class. The facilities here at Aisling Annacotty are second to none.

All in readiness at @aislingannafc for the start of what promises to be a fantastic day in Annacotty. Everywhere looks terrific. Clubhouse & new grass pitch immaculate. The @LFC Legends game kick-off at 2.30pm #LLSport @LimkLeaderSport pic.twitter.com/vEdsyVsAPG

"The pitch is magnificent. We had a very good crowd. All the lads played and enjoyed it."

Chairman of Aisling Annacotty Jim Canny said the wonderful memories created on the day would last for a generation.

"Today exceeded all our expectations, it exceeded even our most optimistic forecast we could have had," Jim Canny enthused.

"From the weather, to the crowd, to the organisation to the atmosphere around the club, it was fantastic.

"The great thing about today is that it will create memories that will last for a generation.

"We never expected to have nearly 3,000 people here. Everyone enjoyed the day."