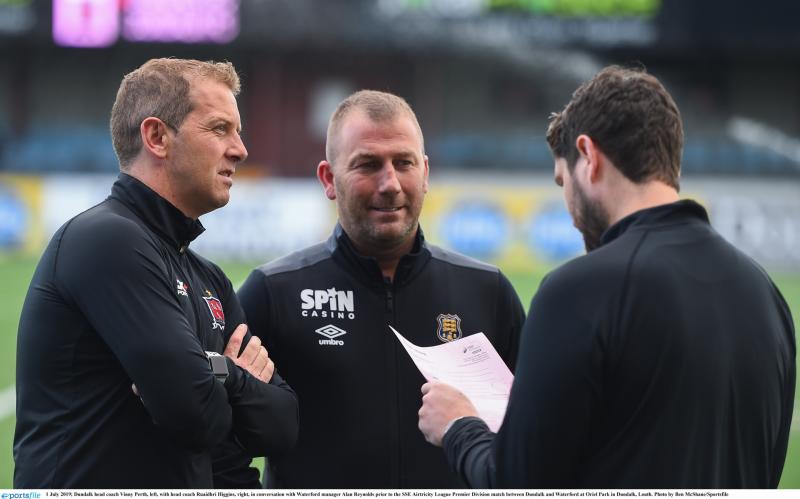 Dundalk boss Vinny Perth has voiced his concern over “disrespecting” the FAI Cup by allowing the Tunnock’s Caramel Wafer Challenge Cup to take precedence over it, with Waterford's FAI Cup tie with Dundalk facing possible postponement.

Dundalk should be heading to the RSC for their last-eight clash on Friday week, September 6, but the Blues are instead set to host Heart of Midlothian U21s in the Scottish Challenge Cup on that night.

There is the added complication of Stephen Kenny’s Republic of Ireland U21 squad announcement this week, with Waterford pair Zack Elbouzedi and Michael O’Connor in the frame for call-ups.

Will Fitzgerald is unlikely to be in contention having only returned from injury, but two players would be enough for Waterford to trigger a postponement against Dundalk.

The Irish host Armenia on September 6 and travel to Sweden for a September 10 clash in their 2021 UEFA European U21 Championship qualification group, meaning that the cup tie would not even go ahead in that midweek.

However, it is the likelihood of the FAI Cup being postponed due to the Tunnock's Caramel Wafer Challenge Cup – a tournament that Dundalk centre-half Andy Boyle won with Ross County last March – that has irked Perth.

That was a fixture that had to be rearranged having been postponed in June due to The Students having players called-up for the Toulon Tournament.

Dundalk’s head coach added: “Waterford are due to play on the Friday night in some Scottish competition, so they’re going to play against an U21 team."

“My concern is if we’re going to go down that route and disrespect the FAI Cup – which is, in some sense, the FAI’s. Whoever owns the league, it will always be the FAI Cup. So, if that is going to be disrespected, I’m concerned about that from a league point of view and moving games to suit that."

“But I don’t know, other than I just want that game to be protected as best we can. But, look, we’ll turn up when we’re due to turn up, whatever Waterford and the FAI decide the date is – we’ll be ready.”

Dundalk – unlike previous seasons recently – have not had much luck in cup competition draws this year, which Perth noted when asked his thoughts on being handed a trip to Waterford.

“There is no doubt if we’re going to do anything this year, we’re going to do it the hard way,” he said, “with all the injuries we’ve had in the one position, with the cup draw – even the League Cup, we’ve got three Premier Division teams, that’s strange, to get to the final."

“In the FAI Cup, we’ve been away to Cobh in the middle of Europe, we’ve been up in Derry – both four-hour trips – and now we’re down in Waterford. But it is what it is, you can’t change it, so it’s fine."

“We’ll get on with it and we’ll move on. Waterford are a team we really respect. They’ll be a big threat and there’ll be a big crowd down there. I just hope the game is played at the right time.”

If the Waterford tie is postponed, for either reason, it leaves Dundalk with a free slot on September 6.

That date may be filled by their outstanding league clash with Neale Fenn’s Cork City, who are already out of the FAI Cup having fallen to struggling Galway United. The original fixture was postponed in July due to the clubs’ respective European engagements.

After Monday night’s win, Dundalk are now just 18 points, at most, away from retaining the Premier Division title, and could quickly eat into that haul with trips to UCD on Friday and Sligo Rovers on Monday coming up this weekend.