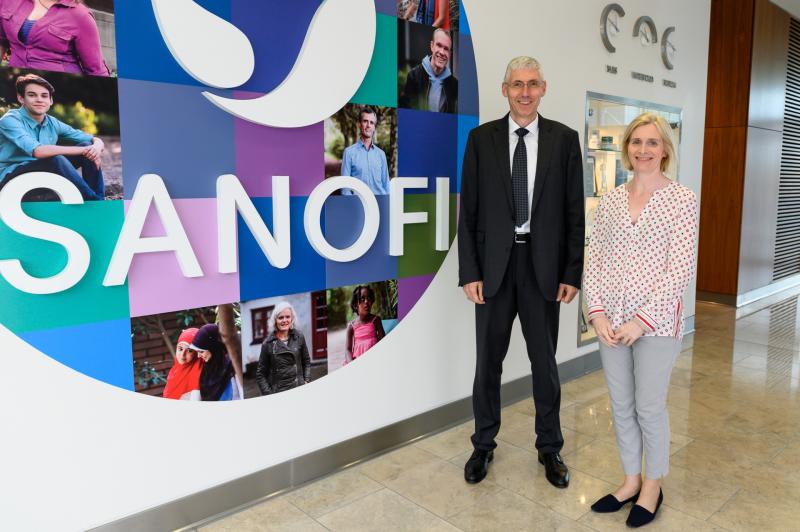 Sanofi, the global biopharmaceutical company, has appointed Dr Johannes Schweppenhäuser as Site Head at Waterford where they employ almost 800 people.

An experienced industry leader, Dr Schweppenhäuser has led Sanofi’s Site Frankfurt Biologics & Oncology in his native Germany since January 2017. A pharmacist by profession, he also previously worked with Hoffmann-La Roche and Bayer, with whom he spent six years in leadership roles at a biotech facility in Berkeley, California.

At Waterford, Johannes succeeds Ruth Beadle who was Site Head from October 2015 until her recent appointment as Head of Vials Liquid/Lyo & Biologics Technology Group. Along with Waterford, this role encompasses Sanofi sites in Frankfurt, Germany and Anagni, Italy. Ruth is also now a member of the Injectables Platform Leadership Team within Sanofi Industrial Affairs.

Announcing Dr Schweppenhäuser’s appointment and reflecting on her own transition, Ruth Beadle said: “Johannes is an excellent leader with considerable relevant experience at multiple sites in Germany and the United States. I have no doubt he will make a real impact at Waterford."

"It’s been a real challenge and tremendous privilege for me to lead the Waterford site over the last three and a half years. Through a great team effort, we have seen the site grow and diversify to serve more patients around the world than ever before.”

Johannes Schweppenhäuser added: “I am really delighted to join a winning Sanofi Waterford team and to move to the beautiful southeast of Ireland. Since joining Sanofi, I have heard a lot about Waterford and what has been delivered by the team here. To now join that team in writing the next chapter in the Waterford site story is something that I am very excited about. I can already see that there is no shortage of energy and ambition.”