Love Island new boys make their mark on the villa

Love Island continues on 3e on Tuesday at 9pm. 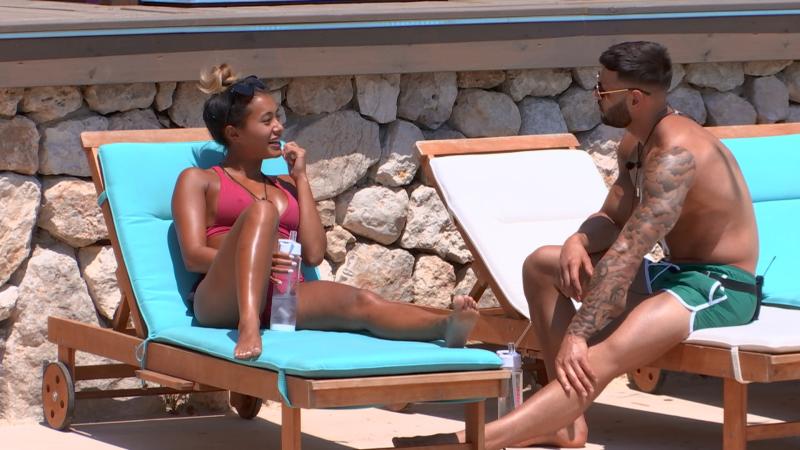 On Tuesday's episode of Love Island, Samira is upset following Frankie being dumped from the Island.

She cries to Ellie and Megan: “You don’t understand girls, I’ve waited so long and finally someone comes in for me and I want them. And then this happens. And I’m back to square one. I don’t want to meet anyone else right now.”

Samira says: “I really hope that Frankie waits for me.”

Wes tells Josh he is relieved that his mate has stayed.

Whilst Ellie and Charlie are both relieved that they are staying in the villa together. Charlie tells her: “I’m telling you now, I will be waiting outside no matter what. I’m not just saying this El, I’ve literally not felt like this in ages. I’ve been so scared to get in a relationship and now I’ve found you and there, it could have gone just like that.”

Ellie tells him: “I’m so gutted for Samira and Frankie.”

Georgia and Sam are quizzing Laura on her thoughts and feelings about two new boys entering the villa.

Laura says: “It’s nice to have the upper hand for once. I don’t know what’s going to happen. These boys might not fancy me.”

In the Beach Hut, Laura says: “It would be nice for Jack to sweat a little bit. Sometimes it helps if they see you chatting or giving attention to someone else which is what I’ve had to do with Jack today, I’ve had to see Jack speak to Grace. If Jack wants to have anything with me again he really needs to tell me how he feels.”

Meanwhile, new Jack tells Charlie: “If anyone said to me right now ‘who would you rather, Grace or Laura?’ I would still say Laura and I’ve said that from the start because I feel like even though me and her aren’t romantic I still care about her.”

Charlie tells him: “There is something there with you and Laura, mate. I wouldn’t close the book on that.”

In the Beach Hut, new Jack says: “In the back of my mind, there is still unfinished business there with me and Laura because I do still care about her. On top of that, these two new boys don’t really help the situation. It is what it is.”

New boys Idris and Kieran enter the villa. The Islanders gather round to get to know the new boys.

In the Beach Hut, Georgia says: “We’ve got two new boys. I love boys. There’s nothing wrong with a little harmless flirt every now and again is there? A little wink here and there. I’ve got to keep Sam on his toes at the end of the day.”

In the Beach Hut, Dani says: “I knew for a fact that Georgia was looking at them and I know Sam was thinking ‘shit.’ Idris and Kieran are Georgia’s type to a tee.”

In the Beach Hut, Kieran admits: “The three girls that I like at the minute are Georgia, Kaz and Ellie. So I’m going to start putting in a bit of work on the girls and we’ll see how we get on.”

Kaz, Josh, Wes and Megan are having a chat. Kaz says: “I’m going to make a little prediction, I reckon Georgia has her eye on Kieran.”

Georgia and Idris have a chat by the fire pit. Idris asks what is going on with her and Sam.

Georgia says: “Obviously I am very loyal. I’m a very loyal girl. Very loyal. And when I am with someone, I am completely loyal unless I am honest with them, tell them how I feel, then I crack on.”

Idris says: “I like that about you to be honest, that you’re loyal… It’s a good trait to have.”

Georgia asks who Idris wants to crack on with and he simply replies to her: “You.”

As Georgia gets to know the new boys, Sam speaks to Alex and new Jack.

Sam says of his toes being tread on: “Gee is Gee isn’t she. It is what it is. You’ve got to back yourself. I’m not going to change. There’s nothing I can do.”

In the Beach Hut, Sam says of Georgia: “I really like her. There’s no one else in the villa for me. It’s not nice seeing the person you like talking to a couple of new lads but it is what it is.”

In the Beach Hut, Idris says: “All the girls in the villa are very beautiful but there is something about Georgia that has just drawn me towards her. It might be how she is or how she is upfront. I want to talk to her more and see how it goes.”

Ellie gets a text: “Islanders, the Hideaway is open tonight, please choose a lucky couple to escape for the night #HideawayAndChill #CuddleTrouble”

The Islanders say Megan and Wes should spend the night in the Hideaway.

The new boys have well and truly entered the villa to ruffle feathers. How will their arrival leave the couples in the villa?

Laura says: “Just tell me what you want. Tell me how you feel. The last thing you said to me was ‘do you see a spark?’ and I said ‘yeah’ and then you went, ‘I don’t.’”

New Jack tells her: “I just tried to think too deep and too far into the future.”

In the Beach Hut, new Jack admits: “The last couple of days I have distanced myself because I’ve been confused but you can’t fight back feelings. They are there and a little bit more than I thought they were if I’m honest.”

The next morning, Laura debriefs with Dani and Ellie on what new Jack told her in bed last night.

Later, new Jack and Laura are speaking on the daybeds. New Jack admits: “I do love spending time with you but I think it’s not been straight forward for us. Last night, these two boys have come in. That for me was the worst time because anything I say now or do now you’re going to think he’s acting like this because two boys have come in. It’s not nice seeing people like Idris talk to you. There is jealousy there.”

Will Laura and new Jack decide to make a go of things again? Or is it too little too late for Laura?

Meanwhile, Sam is thinking about his relationship with Georgia and how the new boys might affect that.

In the Beach Hut, Idris says: “I normally do get the girls I want. I’m going to try and sway them towards me, give them a bit of chat.”

Laura has a chat with Idris in the garden. Laura says: “I used to have a type. I was with Wes, now I’m seeing Jack. It’s been a bit up in the air the past few days. I think he is keeping his options open and so am I because you have to.”

Idris is laying it on thick with Laura.

In the Beach Hut, Laura says of Idris: “He’s really sweet, he’s quite charming and quite forward, it’s refreshing when a new person comes in and treats you with respect and tells you that I like you and want to woo you a little bit, it’s every girls dream isn’t it.”

Kieran goes to talk to Georgia.

In the Beach Hut, Georgia says: “Kieran was very bold. I was sat with Sam enjoying the sun. Next thing you know, Kieran pulls me for a chat. He doesn’t really pull me for a chat, he tells Sam to get gone. Ballsy.”

Georgia tells him: “It’s really nice to have some new people in the villa, it’s really refreshing. Me and Sam are a really new couple and we’re getting to know each other day by day… it is chilled.”

Kieran asks: “Are you up for spending a bit of time with me and seeing how things go? I think you’re a great girl Georgia, I think we’re going to get on well.”

Kieran has set his sights on Georgia but how will this leave her relationship with Sam?

Kieran pulls Kaz for a chat too. He asks where her head is at in her relationship with Josh. Kaz tells him: “I’ll be honest with you, I’m really happy. Yesterday he asked me to be his girlfriend.”

In the Beach Hut, Kieran says: “When I want something, I will chase it for as long as I need it. I will make sure I respect Josh but I don’t owe him anything, I’m going to crack on with his bird.”

WHO WILL KIERAN AND IDRIS TAKE ON A DATE?

The Islanders are relaxing in the garden.

Kieran gets a text: “Kieran and Idris, tonight you will each get a chance to pick a girl to take on a date. #MullItOver #IfYouDon’tAskYouDon’tGet”

Sam tells Georgia how he feels about her: “I’m buzzing it’s become something more and I hope if you do go on a date with one of these guys, that solidifies that a bit. I think Kieran is definitely looking at you. He’s trying to get in my head a bit.”

In the Beach Hut, Georgia says: “My eggs are up in the air at the moment. They haven’t landed in any baskets whatsoever.”

As night falls in the villa, Alex, new Jack, Charlie, old Jack and Dani are asking Georgia how she’d feel if one of the new boys asked to take her on a date.

She says: “At the end of the day, I will give them a chance because that would be unfair if I didn’t. However I do have a connection with Sam so it would have to be a bloody good date.”

Idris gets a text: “Idris and Kieran, it’s now time for each of you to ask your chosen girl to join you on a date #TakeARisk #ShesTheOne”

The new boys have to choose one girl each to take on a date. Who will they choose and how will this leave the boys in the villa?