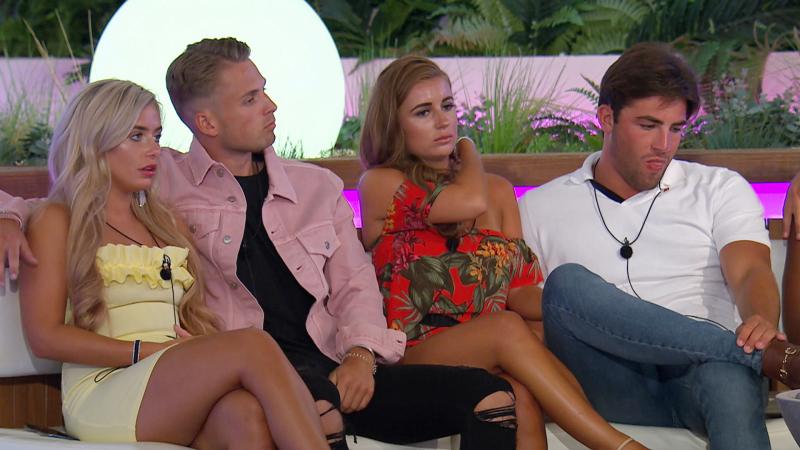 Love Island continues on 3e on Monday at 9pm as the drama intensifies.

Laura is telling the girls about the conversation she had with new Jack over dinner. While she told him she regrets calling time on their relationship, he told her that things won’t work out between them. She tells the girls: “He just doesn’t like me.”

Meanwhile new Jack tells the boys: “It would be very easy for me to feed her a load of rubbish and say ‘we’ll work it out and smooth it over’ but me doing that isn’t fair for me or her because it’s not natural.”

In the Beach Hut, new Jack says: “Two or three days ago, I thought me and her could do really well together and to some extent the feelings are still there. You can never say never but at this moment in time, romantically, it’s not working.”

As the romantic meal for the couples continues, it’s time for dessert.

Whilst things between Laura and new Jack are strained, old Jack and Dani are talking about how well things are going for them.

Old Jack tells her: “I promise you 100 per cent, I want to plan my future with you. I haven’t felt like this about anyone ever. I forgot what it was like to fall in love with someone and I want to be with you.”

Dani tells him: “It’s mad isn’t it? I’m glad I’m that girl though. You know when a boy always needs to meet that one girl and you’re never really that girl are you? Now I’m that girl.”

In the Beach Hut, he says: “I want to share my future with her and I want us to build something together. It’s really exciting and Dani she seems happy about it so what a wonderful thing to happen.”

Meanwhile Josh tells Kaz how he feels: “I don’t really like talking too much about my feelings and I’m here like a softie.”

Megan tells Wes: “I didn’t think I’d meet anyone like this in here.”

New Jack tells Laura: “Not one of us is to blame, we’re in a sticky situation. I would like to make sure that we still are on good terms.”

In the Beach Hut, she admits: “For me it’s not over. I really like the boy and it’s annoying because I feel like I like him more now… I hate the fact I fancy the guy again that’s not interested. I have no ego left at all.”

The Islanders all settle down to bed. As Laura and new Jack call it quits, Megan and Wes get down to doing bits. The next morning, Wes tells the boys: “We just did bits.”

On the terrace, Samira and Ellie ask Megan what went on between her and Wes. She says: “It’s been a journey. I feel like now we’ve got each other I’m so happy. I feel so close to him. After that date, we spoke about how similar our families were and how geeky we used to be at school and it was just really cute. I feel so much closer to him.”

In the Beach Hut, Megan says: “I’ve found everything I’ve been looking for in Wes… If Wes did want to be my boyfriend, I wouldn’t say no.”

Later in the show, Sam and Georgia have a chat about how they are getting on. Sam says: “I want to make sure you’re happy the whole time. I now feel like I’m in a couple where I feel lucky and I want to do things for you. It just feels like, for me I’ve never felt so comfortable in here. Each day that goes by, you do like you more and more.”

She tells him: “It’s nice for me too. I do fancy you and I think you’re proper fit and I am excited to keep things going and see where things can go for sure.”

Later, Samira and Frankie are talking about their relationship. Frankie tells her: “I like you more and more each day… Every day I think we both like each other more. We don’t need to put a label on it right now or change anything, we just need to keep doing what we’re doing.”

LAURA HOLDS OUT HOPE WHILE NEW JACK GETS TO KNOW GRACE

New Jack gets to know Grace. She tells him: “When I first saw you I thought ‘you’re fit’ and everything. Everyone in here is fit. But I did notice how confident you were and how affectionate you were to Laura and I thought that was really nice. The more I’ve seen you around, I just think you’re quite a nice guy so it’ll be nice to get to know you.”

New Jack tells her: “Don’t feel as if you can’t come and chat to me. It’s not like you’re going to step on anyone’s toes. I’m single in here.”

Later, Grace and new Jack are spending some time together while she cuts his hair.

That night, Alex talks to Laura about how she feels seeing Grace and new Jack crack on together. She says it’s hard because she obviously still likes new Jack. Alex tells her she needs to stay strong.

Meanwhile, Grace and new Jack have a chat in the garden. He says: “Getting to know you more and more it’s nice. There are a lot of things about you that I think are quite unexpected.”

Grace tells him: “I think you bring out a more playful side to me which is nice.”

Is romance in the air for new Jack and Grace? How will Laura react?

Kaz gets a text: “Kaz and Josh, you are heading out for a champagne date. Please get ready to leave the villa. #BubblesWithBae #SunsetLovers”

On their date, Josh tells her: “I’m really happy. It’s been a journey and I feel like it’s only just starting with you. It started when I walked through the door at Casa Amor and I feel like I’m getting a bit emotional. I feel like my journey really started when you came through the doors at Casa Amor. Even though it’s been a short amount of time, I feel like I know you really well. My favourite time of day is waking up to you and my second favourite time of day is going to bed and lying in the villa and talking absolute rubbish. I thought now is a good opportunity for me to ask you…”

Josh clearly has a big question for Kaz, but will their relationship move to the next level and will they join the Couple Club?

Love may be in the air but so is tension following Georgia and Ellie’s fall out the other night.

In the villa, Georgia tells Sam, Laura and old Jack that she wants to make things up with Ellie.

Georgia says: “I want to talk to Ellie because I feel like now there is just tension in the villa between us both. We don’t have to be friends but I think for my sake and for her sake it would be better for me to be the bigger person.”

Georgia says to Ellie: “I do want to be the bigger person and I do want to come over and say, ‘Yes I wasn’t a saint,’ I know that. People are different. You approached it in a different way but I’ve come over to chat to you because I’m fed up of it. I’m wasting more energy avoiding you than I would just getting on. I’m here to find a partner, I’m not here to make friends and I want to focus on what I’ve got with Sam.”

In the Beach Hut, Ellie says: “I’m at a point now where whatever she’d said, even if she’d come at us screaming I would have still sat there the same. You know when you’re just so over it… That was more for her than it was for me. She must have needed to do it so…”

Samira gets a text: “Islanders, tonight two new boys will enter the villa… but first… two Islanders must leave. Please gather around the fire pit immediately.”

This text has sent shockwaves into the villa as the Islanders nervously gather around the fire pit.

Wes gets a text: “The public have been voting for their favourite girl and favourite boy. The Islanders with the fewest votes will be dumped from the Island tonight.”

The three girls and three boys with the fewest public votes are announced before the boy and girl with the lowest votes are revealed. After a rocky few days in the villa, who is safe and who will be dumped from the Island tonight?