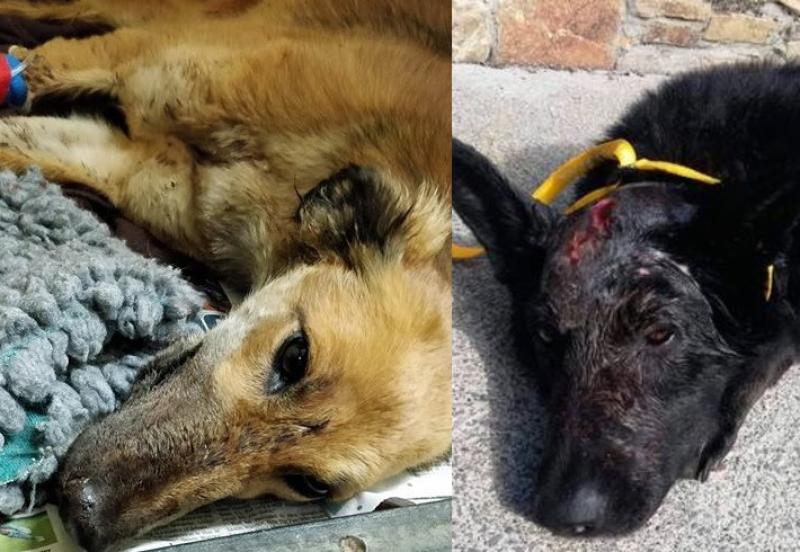 Animals are being "tortured" across Tipperary and Waterford, Waterford Live can reveal.

The shooting of a cat with a pellet gun by an "absolute scumbag", according to the owner of the cat, in Carrick-on-Suir last month was the latest in a string of cruel acts on animals across the South East.

A Saluki (called Billy) was shot between the eyes and through the jaw with a pellet gun in Ballynonty and a German Shepherd (named Leo) was found in the bog in Ballinure, County Tipperary, with a maggot-infested head injury as a result of being hit with a blunt instrument during the month of September. Leo is facing a long recovery after being hit with a blunt object between his ears in Ballinure.

Both dogs are recovering well at PAWS Animal Rescue in Mullinahone, while the cat is being treated at its home in Carrick-on-Suir, but others haven’t been as fortunate.

A cat was shot and left for dead in Mooncoin, County Kilkenny, last month. Staff at Suirside Vets in Carrick-on-Suir tried desperately to keep him alive, but an x-ray revealed a shattered pellet in his spine along with entry and exit wounds.  The decision was made to euthanise the cat because of his severe injuries, leaving the cat’s owners “crying themselves to sleep”. Billy was shot between the eyes and through the jaw in Ballynonty.

A 37-year-old Waterford man pleaded guilty to two offences under the Animal Health and Welfare Act 2013 including causing unnecessary suffering and neglect regarding the health and welfare of a dog this month.

An ISPCA inspector and a staff member from Waterford SPCA found the dog in extremely poor condition when they visited the man's  property in Waterford city in April 2017. The 14-year-old male lurcher was underweight, had visual impairments due to cataracts, discharge and inflammation in both eyes, a chronic skin infection, hair loss and inflammation due to untreated mites, and several tumours on his body.

The man received a three month custodial sentence (suspended for 12 months) and was disqualified from owning any animals for a period of five years.

Deise Animal Sanctuary’s Pat Edwards is leading the fight to stop animal abuse in the region. She says legislation needs to be put in place to punish the criminals involved in the animal cruelty ring.

“I had one of my dogs stolen recently, I know who took my dog, reported him but nothing is being done about it.

“The dog fighting in Waterford city is outrageous. Everyone knows it’s going on but what can we do about it? I’ve gone down the legal route so many times but nothing comes of it. The dogs are in appalling conditions but you can’t go onto private property to save them.  People are being forced to take matters into their own hands. They are so fed up that there is going to be a vigilante group before too long,” she continues.

Pat claims that dogs are being killed in Clonmel because “a certain minority” are not capable of looking after them. “We had to get the council to remove the body of a greyhound in Clonmel recently. The dogs are being tied to the side of the road and are not use to the traffic. Dogs are being killed every day of the week in Clonmel and they are left lying dead on the side of the road because the owners couldn’t give a shit. We got a dog in from Clonmel the other day that had his face bitten off and a dog from Cahir that had his legs smashed,” Pat says.

Pat believes animal cruelty is getting worse across the South East and expects there to be significant dognappings in the run up to Halloween. “Keep your dogs in doors because they are going around robbing them already. We just picked up two dogs dumped on a site down in Dungarvan. Animal cruelty is happening all year round, not just at Halloween.

“I rescued 26 cats in Carrick-on-Suir a few years ago because lads were killing them with hurleys. Over 100 complaints were made about them cats been killed and not one was registered with the guards. An old man was kept in his house in Carrick-on-Suir while a 14-year-old beat kittens to death. Dogs were being put on the cats and ripping them to pieces down alleyways. The cats we rescued are still with me now and living their lives away from that abuse. But the animal cruelty has gotten worse since then and it's everywhere now. The laws here in Ireland are useless. Something needs to be done about the cruelty now,” she adds.

Tipperary group Action For Animal Welfare Ireland marked World Animal Day by holding a peaceful protest for animal welfare rights outside the gates of Leinster House last Thursday. They were joined by animal welfare organisations and horse rescues from across Ireland, chanting "there's no excuse for animal abuse".

The group formed in response to a series of horrific horse neglect cases and have been campaigning for the appointment of a horse warden for every county in Ireland. The support for this campaign has received over 11,000 handwritten signatures and was presented to the office of Minister for Agriculture, Food and the Marine Michael Creed in Dublin.

“Increased incidents of horse neglect and cruelty are not only stretching horse rescue services beyond their capacity but indicate a deep flaw in the current provision. Without the enforcement of the necessary deterrents and appropriate criminal sanctions provided for in the laws, the situation looks set to worsen,” Anne adds. 'Saving lives on a shoestring'

PAWS Animal Rescue’s Gina Hetherington says animal cruelty is “huge” at present and is calling on Tipperary County Council to support the work of animal rescues.

“The dog warden here in South Tipperary is one of the best in the country but the problem is that the council won't let people into the dog pound in Clerihan to take pictures for social media with the aim of finding the dogs new homes. Almost every pound in the country has a Facebook page and that is why the re-homing stats are so high. The dogs are being passed onto animal rescues by the local authority but we are not getting a donation to look after them, which makes no sense to me. We use to get €1,000 a year from the council and that was stopped," Gina claims.

"Basically, ourselves and Mo Chara Animal Rescue in Thurles are taking the problems off the council and they in turn are saving money. The problem for us at PAWS at the moment is that our vet bill is €34,000 and the donations are not coming in. We are seeing a lot of lurchers with broken legs coming into us. These dogs would be put down by the council only for us rescuing them. The council needs to be proactive and give something to the animal rescues that are saving lives - it’s just unbelievable that they are not,” Gina states.

'Stand up and be counted'

Nikki Veasey from Mo Chara is calling on people to stand up and identify those involved in animal cruelty.

“There’s not enough being done to stop animal cruelty. The public have to come forward. Everyone blames the guards and the dog wardens but without people stepping up to the plate and being prepared to say ‘I know who owns that dog’ or ‘I saw that happening’, you can’t make a case on false allegations. We get calls about cruelty every day and people tell you not to mention their name. Rescues have very limited powers. If I knocked on a known animal abuser's door and they told me to f-off, there’s nothing I can do. Stand up and be counted!

“It’s irresponsible ownership that causes the need for dog pounds and wardens. In the last few weeks alone we got a lurcher puppy that was thrown into someone’s garden. She had a broken leg since she was four weeks old and the leg was hanging off. We also got a dog in that was suffering from a very severe case of mange that caused septicemia and she sadly lost her life”.

Nikki says animal rescues are in crisis due to a lack of money.

“We get a small grant each from the Department of Agriculture because we are  a registered charity. Last year we got €14,000 but our costs were €130,000. We only have two part-time paid staff that work in the charity shops. Nobody directly involved with the animals is paid a salary. Every rescue centre needs more money. We battle week in week out with veterinary bills and there's not one animal rescue that is never skint.

"We use to get a €500 grant from the council under the clubs and organisations scheme but we were then excluded from that because it was more geared towards sports. I have been dealing the last four years with Nenagh Dog Pound and in fairness to them they work really hard and alongside us. They microchip the dogs for us that come out of the pound which is a small saving per dog.

“We are lucky that we have the charity shops and we do a regular monthly bake sale and attend anything we can to keep us on our feet,” she adds.

Waterford Live has contacted the relevant local authorities for comment.