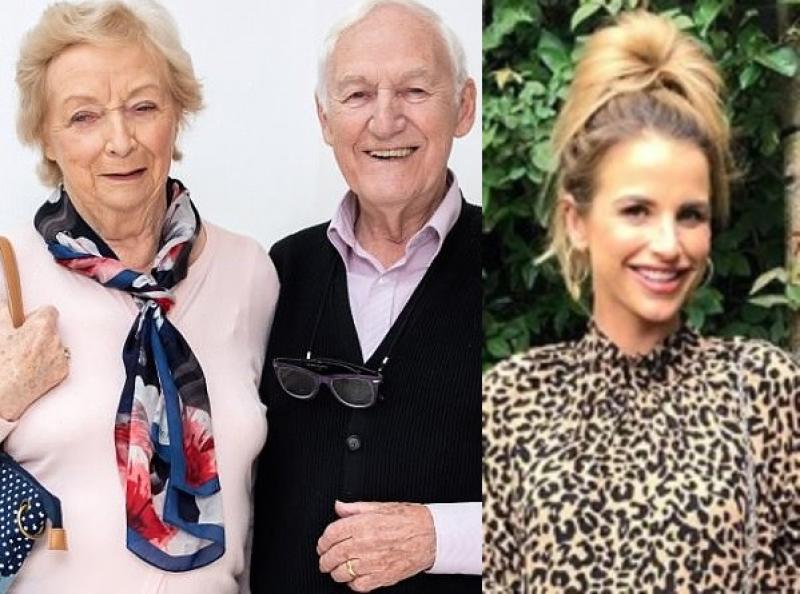 Des and Mona Manahan featured in the documentary which explored monogamous relationships and questioned if having one partner for life is a realistic proposition in the modern world.

The Manahan’s set relationship goals for the country, expressing love for one another that left Williams and viewers alike emotional.

Des recently told Waterford Live that real love always shines through and credits family and friends for their support over the years.

Des and Mona's love story went viral last October after they were photographed at Debenhams make-up counter in Waterford. Mona, whose eyesight is deteriorating, decided to get her make-up done at the Benefit counter for Des’ birthday bash, but her creative husband had other ideas.

"With Mona’s eyesight being so bad, she would turn to me and see if it was ok. I would adjust it and clean it up, but on this occasion she wanted to have it done professionally. The make-up artist, Rosie O’Driscoll, told me to get lost while she was getting it done but I came back and started to mess around, telling her that the lines were crooked, joking and annoying her. Then I started to do Mona’s eyebrows and as I started doing them one of Rosie’s colleagues took a photo. Two days later I got a call from Rosie saying we had gone viral and in my innocence I said ‘is that a medical condition?’,” Des said.

Rosie sent the photo of Des doing Mona’s make-up to her boss in London, and the couple’s heart-warming story took off from there. Two make-up lessons later, Des and Mona have featured on RTÉ’s The Late Late Show, the BBC and across news outlets worldwide. Kim Kardashian's make-up artist Mario Dedivanovic even invited them to his make-up masterclass in London last April.

“Mona uses very little make-up and was never into it. My own preference is less is more and Mona trusts me to do it. Every morning she’s going somewhere I do it and it takes only 15 minutes.

“A few weeks later a phone call came from New York from the great Mario Dedivanovic who does all the Hollywood stars. He saw the story, thought it was very touching and lovely, and invited the two of us and Rosie to London last April for his Masterclass. I had no idea that this man was held in such high esteem by his fellow make-up people. There were 600 people in the theatre who had paid £600 each to attend, well 598 people and us two - you couldn’t have missed two 83-year-olds in the crowd. He came out on stage to tremendous screaming and roaring. He calmed them all down and told everyone our story. Next thing the whole theatre had mobile phones flashing at us and TV cameras were there too. We were just laughing because our interest in make-up was so minimal and yet it was such a huge thing in their eyes,” Des continued.

A 17-year-old Des was working in Waterford Crystal when he first laid eyes on Mona. He fondly remembers looking out the window at work and seeing Mona heading back to finish her Leaving Cert. “I thought she was nice, and she was part of the group of girls that we hung around with at that time. Nice, innocent, shy boys and girls just joking and laughing. The summer season came along and back in those days, 1952, we got the train from Waterford to Tramore. We would all buy a monthly ticket and the whole gang would travel together. We were always trying to impress each other. Nat King Cole’s song ‘They try to tell us we’re too young’ was a big hit and I was singing this trying to show off but it didn’t get me anywhere. I didn’t have any success with Mona until after Christmas that year and that was my present”.

Mona went to London nursing for four years and when she came back the couple rekindled their love and married in 1961. They celebrated their 50th wedding anniversary with a holiday to the United States with friends, who secretly set up a renewal of wedding vows in Las Vegas for the Manahan’s. “We went to Chicago, Nashville, Memphis and then onto Las Vegas where the other four in the group, on the quiet, arranged a renewal of vows. I was terrified that it would be by a preacher like Elvis Presley but it turned out to be very dignified, nice and beautifully done. It was great craic, and hopefully we will be here in another 17 years to get some money off the Government for passing 100,” Des laughed.

Des said shared experiences and real love are the cornerstones to a happy relationship. “It’s hard to pinpoint the key to a happy marriage for every couple. I’m not a drinker or a smoker, and I was never one to be out at night with the boys, so that helped. We have been together in everything we have done throughout our lives so there’s that kind of a special bond between us. Anywhere we go you’ll see the two of us holding hands - we’re doing that since we were courting.

“We don’t argue, you learn to accept what each other wants and when you love someone you are going to do things to please them and they will do the same. Love, respect and doing our best for each other. We were never wealthy in a financial sense but we always had each other and always got on. We had five sons and a daughter so there was plenty to keep us occupied. Real love, that’s what matters most,” Des added.