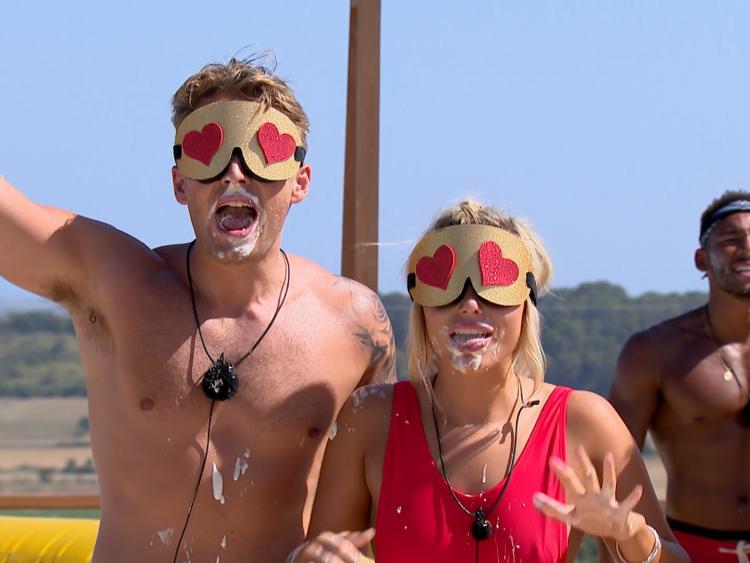 Love Island continues on 3e on Wednesday at 9pm.

Georgia is upset after speaking to Josh following his decision to recouple with Kaz.

Later, Kazimir and Josh have a chat. She tells him: “Out of everyone, we get on so well.”

Josh says: “Exactly, which is why every day that we’re here I’m like, how can I regret that? I knew I would not regret this decision.”

Kaz tells him: “When you know, you know.”

Josh says of Kaz in the Beach Hut: “I feel like a kid in a candy shop when I’m around her. I’m so excited and I haven’t had that in a long time. She is the entire package, right here, right now.”

How will Georgia react to Josh’s affection for Kaz?

JACK AND ADAM BOTH HAVE THEIR EXES ON THEIR MINDS

Jack is talking to the boys. He feels he should apologise to Ellie for how he treated her in their past relationship.

Jack says: “I want to move on from it. Speak to her today and give her a really sincere apology because I am sorry for treating her like that. I’m so happy with Dani and I want Ellie to be happy as well. I want us both to move on, draw a line under it.”

Later, Jack goes to speak to his ex, Ellie: “I just wanted to say I’m sorry, I didn’t treat you very nicely, I was horrible, I let you down. I wasn’t myself then. I am genuinely sorry for how I acted. I just want you to know that I’m sorry.”

In the Beach Hut, Ellie says: “Now me and Jack have cleared the air, Jack and Dani can now get on with things. I don’t want anything to get in between them, I especially don’t want it to be me.”

Meanwhile, Adam is reminiscing on his feelings for Zara: “Me and Darylle get on well, she’s hot. But I’d be lying if I said there wasn’t still feelings there for Zara. I did really like her. Honestly I thought if I went to Casa Amor and threw myself into someone I would just forget about it. But I definitely have feelings for Zara.”

In the Beach Hut, Darylle says: “I think Adam has been a bit quiet the past couple of days and I definitely have noticed a difference between how he and I have been. He was pretty full on and he was saying lots of lovely things while we were in the other villa and I’ve not seen a lot of that in here.”

Later, Darylle and Adam have a chat in the garden. He says: “I know that you’ve probably noticed that I’ve been quite distant which I know I have been. When I was at Casa Amor my head was into meeting new people. The last time I was here [in the main villa] I was with Zara.”

Darylle tells him: “It’s been really awkward coming into this environment. You brought me here and I’ve seen none of you at all.”

Adam says: “I just want you to know I do think you’re lovely and I’m open to getting to know you. It’s just weird right now for me. My head is a bit all over the place.”

What does the future hold for this new couple?

SINGLE WES IS ON A MISSION

Megan and Wes have a chat about her decision to recouple with new boy Alex. Megan says: “I just want you to know I didn’t take it lightly… I didn’t expect to connect with him. I’m sorry I’ve put you in such a situation.”

Wes says: “We put loads on the line for it. I’ve put my neck on the line for this… If there was anyone out of this villa and that villa that I wanted to be with, it was you.”

Megan tells him: “I don’t want to be selfish and have my cake and eat it but at the same time… I do miss hanging out with you and I do really love you as a person so chat to me about whatever. I want to be good friends with you still.”

Later, Wes tells the boys he has a new mission. Wes says: “I’m going to pull a couple of girls just for little chats. The first girl I’m going to pull is new Ellie. She’s someone I didn’t really give a chance in Casa Amor. Ellie first. Then Megan. Alex, I’m about to take your girl.”

In the Beach Hut, Wes says: “I haven’t grafted for a girl yet. Are you ready? I want to go to speak to new Ellie. She is fire.”

In the Beach Hut, Ellie says: “Me and Wes, we get on more than me and Sam did so that’s what I find really attractive.”

Later that night, Wes recruits Dr Alex to help him in his mission. Wes says: “I need you to get Meg to go to the kitchen for some reason. From the kitchen I’ll be there. I’ll then take her to the terrace where I’ll talk to her.”

On the terrace, Wes tells Megan: “I put everything that I’d ever invested into you. I am still holding on to the feeling something could come from it. I am not going to drop that.”

Megan says: “I’d be lying if I didn’t say when I see you chatting to Ellie I’m jealous. A little bit. I do still fancy you but I’m not being harsh on Alex.”

In the Beach Hut, Megan says: “I can’t help but gravitate towards Wes.”

Will Megan mug off Alex for Wes?

THE NEW COUPLES LAY THEIR CARDS ON THE TABLE

New Ellie is talking about being coupled up with Sam: “I do find other boys fit and I think, is that a bad thing? I feel bad.”

Grace and Dr Alex are also trying to get to know each other.

In the Beach Hut, Grace admits: “It’s getting quite difficult with Alex. When we were first talking, there’s so much to talk about because we were getting to know each other and now I’m finding it a little bit difficult to get some fun, more light hearted conversation with him.”

Is Dr Alex regretting his decision to couple up with Grace?

Kazimir gets a text: “Islanders, it’s time to find out who is going to sink or swim in the next couples’ challenge… Babewatch. #LifesABeach #Sharking”

In the first of three elimination rounds, the couples have to feed each other an ice cream whilst blindfolded.

In the second round, Islanders have to knock down sharks with lifeguard floats in the quickest time.

In the final round, the remaining couples will compete to remain on a surfboard for as long as possible, whilst beach balls are thrown at them.

Which couples will prove to be the perfect team?