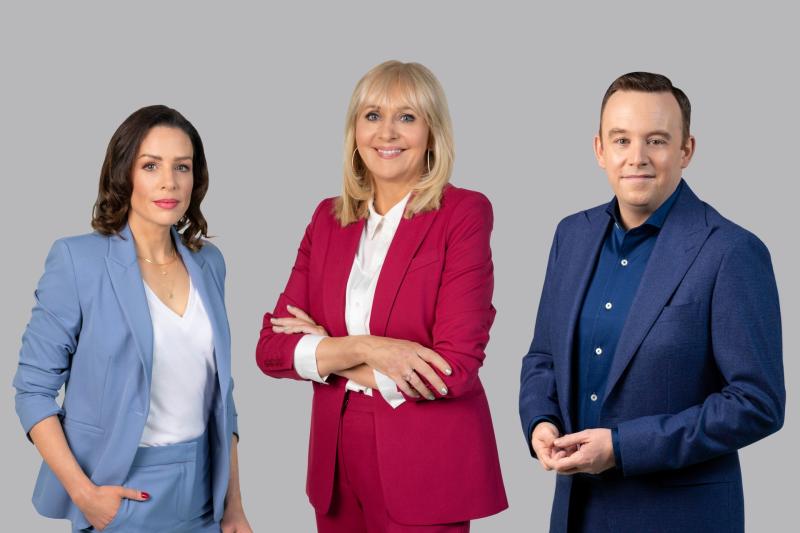 RTÉ has announced a new Prime Time presenting team as Miriam O'Callaghan is to be joined by presenters Sarah McInerney and Fran McNulty.

Tuesday nights will see Sarah join Miriam in studio, with Fran and Miriam taking the helm every Thursday on RTÉ One.

As the new presenting team take to screens beginning the week of April 6, there will also be a refresh of RTÉ Prime Time with the unveiling of a brand-new look for the programme and studio.

As Ireland's most watched current affairs programme, RTÉ Prime Time has seen audiences increase in 2021 with an average of 341,000 watching each Tuesday and Thursday nights on RTÉ One.

Richard Downes, Editor of RTÉ Prime Time said: “As RTÉ Prime Time changes and evolves, our new presenters will lead the mission to illuminate dark corners and ask the questions that matter to you.

“They reinforce a talented team committed to staying at the very heart of public debate in Ireland and being your guide to the truth through the maze of spin and fake news."

Sarah McInerney co-hosts Drivetime on RTÉ Radio 1 on weekday evenings, a fast-moving current affairs programme which covers all the political and topical issues of the day.

She has also previously presented RTÉ Radio 1's Today programme and Late Debate. Before moving to RTÉ, Sarah was the host of Newstalk Drive, and was Political Correspondent with The Sunday Times for eight years.

"RTÉ Prime Time was one of the shows that first sparked my interest in politics. It is a programme that has, for decades, been producing top class current affairs coverage,” said Sarah McInerney.

“I'm delighted to be joining the brilliant team who put it all together every week, and to get the opportunity to work alongside Miriam O'Callaghan and Fran McNulty - two broadcasters I've long admired. I can't wait to get started. Roll on April 6th."

Fran McNulty is an award-winning journalist who most recently held the role of Agriculture & Consumer Affairs Correspondent for RTÉ News. His appointment as a presenter sees him return to RTÉ Prime Time where he worked as a reporter for five years.

During his time with the programme he uncovered abuses in the fishing industry, exposed significant issues in the agricultural and food production sectors and explored a range of issues within the insurance industry, including fraud.

Fran McNulty said: “It’s so humbling to be asked to present RTÉ Prime Time, the country’s flagship current affairs programme, to be part of the new presenter line-up as the programme is reimagined, with a new editor backed up by a tremendous team is an incredible honour.

“Now more than ever people need trusted journalism, we need people to ask the important questions and get underneath the many issues facing Ireland at present. On Prime Time we will continue to work hard to dispel fiction from fact. I can’t wait to get started and work alongside Miriam and Sarah, both of whom I’ve had the great pleasure of knowing for many years and have worked alongside in the past.”

.@MiriamOCal is to be joined by @SarahAMcInerney and @franmcnulty on RTÉ's Prime Time, following the announcement of a new presenting team for Ireland's most-watched current affairs programme #rtept https://t.co/V2lTEUuEhG

RTÉ Prime Time anchor Miriam O'Callaghan warmly welcomed her new co-presenters: "I have been incredibly lucky with my co-presenters on RTÉ, most recently Dave McCullagh - superb colleagues, many of whom have become close friends. I am now very excited to be joined by two exceptional presenters, Sarah McInerney and Fran McNulty. I know and really like them both, and we are all going to work so well together and get on great.”

Speaking about the appointments, Managing Director, RTÉ News & Current Affairs Jon Williams said: “Prime Time has been at the heart of RTÉ's journalism for three decades - but has never been vital more than it is right now: investigating, explaining, and getting answers to the questions that matter.

“With Miriam, Fran and Sarah, RTÉ Prime Time will follow the story, and join the dots, so our audience have the information they need to make the decisions that impact their lives - doubling down on what has been RTÉ Prime Time's mission from day one: to make sense of what's really going on, whether that's around the corner, around Ireland or around the world.”