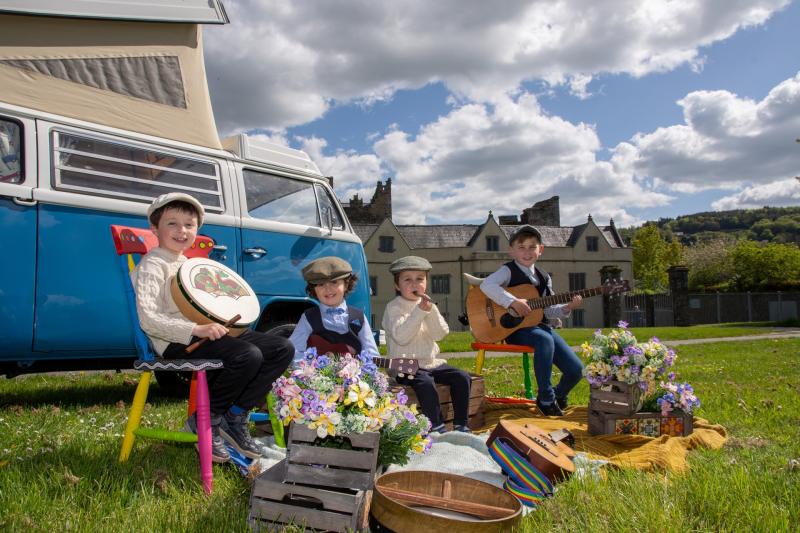 The South East will be buzzing over the June bank holiday weekend as the Clancy Brothers Festival returns to Carrick-on-Suir.

This year’s programme is bigger than ever before, with more concerts, walks and tours, music on the streets and in the pubs, and the popular Riverside Family Day with free open air concert featuring For the Birds, Gael Force 4 and The Backyard Band.

With concerts in Brewery Lane, Strand Theatre, the Nano Nagle Chapel and the Ormond Castle by The High Kings, John Spillane, the Clancy family, Sionnach, Robbie O’Connell and Rose Clancy, The Wood of O featuring Breege Phelan and Will McLellan, and the Carrick-on-Suir Musical Society, the programme is bursting with music.

The Art Trail is also bigger than ever, and this year includes a nod to Woodstock ’69, with crossover events,bringing together writers, musicians and artists, and adding a hippie-chic vibe. Along with exhibitions in 15 venues throughout Carrick-on-Suir, there will be Co-Creating New Music and Art, street art, animation and digital gaming showcases, and pop-up arts events.

On top of all this, there’s lunchtime theatre, the Youth Busking Competition, the Eoghan Power Memorial Ballad Singing Competition, youth and children’s workshops, heritage walks and tours, and cycling and kayaking along the new River Suir Blueway.

Caravan of Love
New to the festival this year, the Caravan of Love was unveiled in the Castle Park, Carrick-on-Suir, during the launch of the River Suir Blueway last Saturday.

A boho-mobile stage, the Caravan of Love will travel from venue to venue over the course of the Clancy Brothers Festival weekend. Follow the Caravan to discover performers, music and spoken word, curated and hosted by Breege Phelan and Will McLellan from The Wood of O, and tie-dyed in with Clancy Brothers Festival Art Trail and the Tudor Artisan Hub.

The Caravan of Love Stage will feature performances by more than 20 acts including folk, trad, contemporary, classic and original music, spoken word, and healing arts and Tai Chi sessions. And with a hippie-chic vibe inspired by the 50th anniversary of Woodstock, the stage features set design by artist Sheila Wood and artwork by Athena Made, bringing bohemian art and colour to the streets as never before.

The stage will also present the culmination of an exciting and ground-breaking arts collaboration between over 30 local visual artists, writers and songwriters, Co-Creating New Music and Art, initiated by Linda Fahy from the Tudor Artisan Hub and Margaret O’Brien from Writing Changes Lives. There will be nine new performance and visual art pieces, each inspired by interviews by Claire O’Regan with Chip Monck and Stan Goldstein, organisers of the original Woodstock Music and Art Festival in 1969. These will be performed by all the co-creators at the Caravan of Love Stage from 4pm-6pm on June 1.

The Caravan begins on May 31 at the Farmers Market in the Heritage Centre grounds (11am-2pm). On June 1, it will be at the corner of William Street and New Street (11am-6pm). On June 2, it travels to the Main Street (12pm-3pm), and it will finish its festival run on June 3 in Castle Street (12pm-3pm).

Evolution concert
The curators of the Caravan of Love stage, Breege Phelan and Will McLellan, will also be playing a show in the Brewery Lane Tea Room as ‘The Wood of O’ on June 2 at 8.15pm.

Following a sell-out show in the Brewery Lane Theatre last year, Breege and Will return with their new show Evolution, taking a journey through the music of some of their favourite and most influential artists, from Joni Mitchell to First Aid Kit, mixed with many of their own original songs.

With Breege on vocals, guitar and ukulele and Will on guitar, keyboard, synths and vocals, The Wood of O forge a unique mix of folk acoustic, alternative and electronica. This promises to be an unmissable, spellbinding concert and a musical highlight of the festival.