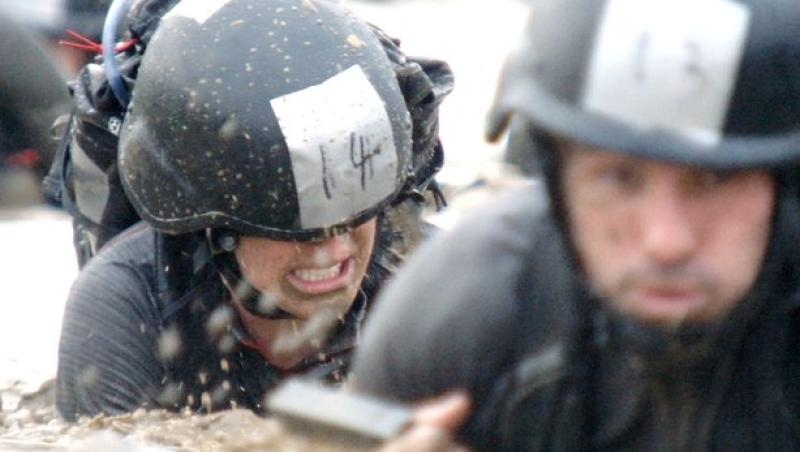 Melissa Walsh is a civil servant who used to have an unhealthy lifestyle so she joined a CrossFit gym in her area in January 2017 and it completely changed her life. She won most improved at the first annual CrossFit Waterford Awards last Christmas and won athlete of the year. Melissa got involved in the series determined to prove that she is a strong person that can push herself to the absolute limits. Melissa also got involved for all of the people like her, who doubt themselves, are self-conscious or unhappy with their appearance.

“I went into this to try something mad, have an actual adventure and actually see how far I could push myself. Some people are disappointed with how they performed, in hindsight and without giving too much away, I'm trying to look at the grand scheme of things. I was a lazy b*****d two years ago, a heavy smoker and a session head,” Melissa says.

“Walking through the doors of CrossFit Waterford changed my life. So much has changed in the last few years, I've had struggles, big highs and big lows. I've struggled with my mental health and still do. I have very little self worth and self doubt is my nemesis, so this challenge was just something to massively take me out of my comfort zone and for a bit of excitement I suppose.

“Through this experience I've met the most wonderful people, so inspiring, accomplished athletes and overall legends. They welcomed me, helped me to feel part of something special and I never felt judged even though I felt so inferior,” she adds.

Kristin Lyons is married with four children. She played elite level hockey, playing for the Irish senior women's team. Her kids are her biggest motivation, applying to take part in the series to inspire them to participate in sport and physical activity so they can be the best they can be. She describes herself as extremely determined, willing to push herself to the limits to get what she wants. She trains seven days a week, with workouts consisting of strength training, running and Murph training.

Melissa, Kristin and the other participants received a "welcome to Hell" as viewers gained an insight into the Army Ranger Wing's highly secretive selection process in the first episode of the series. The Army Ranger Wing is one of the toughest, best-trained Special Forces units in the world. They are on standby 24 hours a day, either to deploy overseas or to react to any serious domestic criminal or terrorist threat. This constant high level of preparedness means their training and skills are benchmarked against other elite Special Forces units across the world including the SAS and the Navy Seals.

However, due to the highly sensitive nature of its work, very little is known about the Army Ranger Wing. Much of what they do is classified, its missions covert and its members have until now stayed in the shadows.

To become a member of the Army Ranger Wing, all unit members must pass selection. Unit selection is the hardest test any soldier in the Irish military can go through. The failure rate is upwards of 90%, with only the toughest, most mentally robust candidates passing.

The 24 recruits (18 men and six women) were taken to a remote military base deep in the Wicklow Mountains in episode one, where they met the drill sergeant staff for the first time. They were given a short, sharp blast of what they can expect all week, before six contestants including Melissa and Kristin were eliminated.

The Hell Week course is based on the actual exercises and tests currently used on the Army Ranger Wing course. The Hell Week course instructors are four veteran unit members. They have designed a course that will test recruits physical, emotional and psychological resilience. It is designed to break all but the toughest of individuals.

The recruits are some of Ireland's fittest men and women. They come from all walks of life, but all with one thing in common - each of them believes they have what it takes to pass selection. The super fit civilian recruits are required to pass rigorous physical, stress and mental tests including fitness, water confidence, navigation and aptitude. Specific tests include cold-water endurance, height tests and claustrophobic challenges as well as various trials of strength, stamina and determination.

However, selection is not all about who is the fittest or strongest. It’s as much about mental toughness, the ability to endure and a dogged determination to never quit. Over the eight days, recruits get on average about two to three hours of sleep a night as they mix day challenges and night tests. The recruits are forced to endure different stress positions and sensory challenges in an effort to break the recruits. The ability to lead or work within a team is also crucial aspect of Army Ranger Wing selection and this is  tested throughout. When a group or individual performs badly, the entire group will be punished.

Each and every waking moment the civilian recruits will face unrelenting pressure. Effort, commitment and precision is the minimum requirement in everything they undertake.  Failure to meet the required standards means they will be asked to leave the course. For those who decide they cannot go on, they simply have to D.O. (drop out) by handing in their number to the drill sergeant.

The four drill sergeants, who lived it for real, all served for more than 10 years within the unit. They speak candidly about their time in the Special Forces and what the unit means to them. Viewers will quickly understand the qualities the Army Ranger Wing require and the type of person who might have what it takes to pass selection.

Special Forces: Ultimate Hell Week continues next Thursday (April 25) on RTÉ2 at 9:30pm. Catch up on episode one on RTÉ Player.