Tickets on sale now at Daytripper.ie 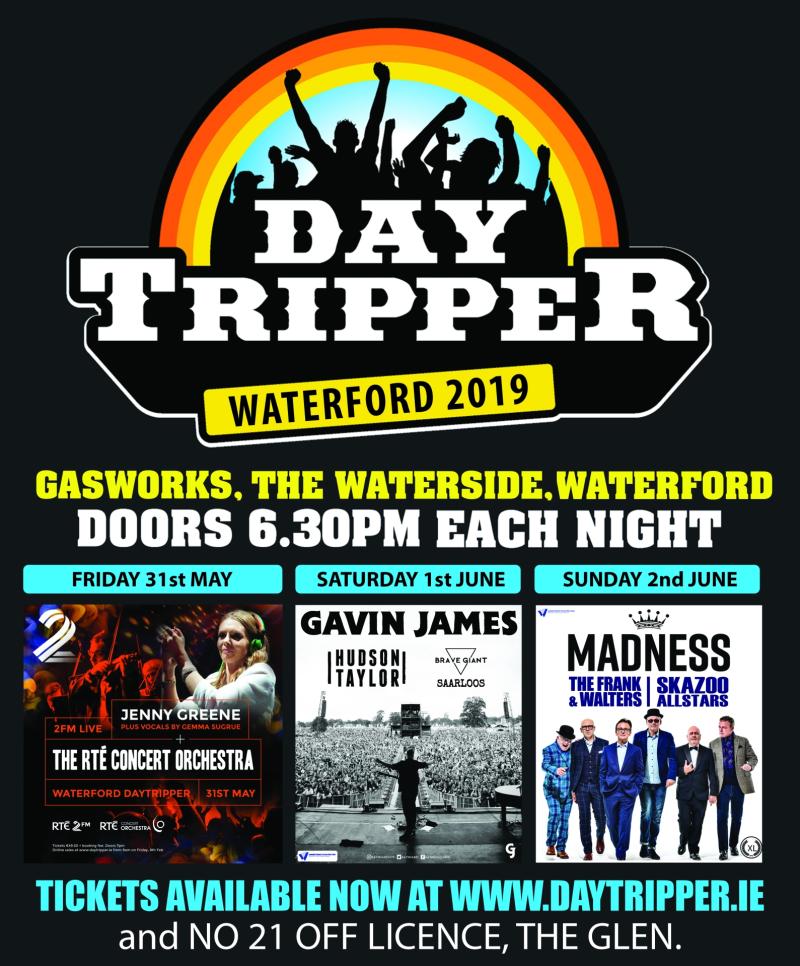 Waterford Daytripper 2019 takes place from May 31 to June 2

The full line-up for Daytripper 2019 is now done and dusted with something for everyone across the June bank holiday weekend, whatever your age or music preference.

The seventh annual music weekend is arguably it’s strongest line-up to date, with Arena level acts headlining on each day. Advance tickets are available now at Daytripper.ie or at No 21 Off Licence in The Glen, Waterford.

Friday, May 31 - Jenny Greene with the RTÉ Concert Orchestra

All good things must come to an end and the fact that the first appearance of the RTÉ Concert Orchestra with Jenny Greene in the South East will now be one of their final four ever shows across the country in 2019 will make it even more special.

Their live attendance figures over the last few years have been nothing short of staggering. They have sold nearly 50,000 tickets in Dublin, 25,000 tickets in Cork, 14,000 tickets in Killarney and 6,000 tickets in Galway. It’s a feel good performance from start to finish with DJ sets from Jenny and guests, before the full 48 piece orchestra take their seats and accompany Jenny and singer Gemma Sugrue on all the massive club classics of the 90s, including Robert Miles Children, Tiesto’s Adagio, Orbital’s Belfast, Candi Stanton’s You Got The Love and of course Faithless’ Insomnia. New tracks are also being added for this final 2019 tour.

Six years after playing the first Daytripper in 2013 at the bottom of the bill, Gavin James returns to headline the event as a global recording star and one of Ireland’s most successful live acts. He has sold out the 3Arena and performed to a full main stage crowd of 35,000 at last summer’s Electric Picnic.

Gavin’s total song streams are rapidly heading toward the one billion mark, making him one of the most successful streamed acts in the world. His second album Only Ticket Home has built on the success of his debut Bitter Pill. The global appeal of songs like Nervous, Tired, Always and Glow means that his current world tour is playing to huge crowds on every continent.

Gavin has handpicked the line-up for his triumphant return to Daytripper, with Waterford favourites Hudson Taylor sure to repeat the impact of their Electric Picnic main stage set in 2018 along with two hotly tipped new Irish acts Brave Giant and Saarloos.

When Madness headlined the first Daytripper in 2013 (what many agree was the best concert performance ever in the city), they were so blown away by the response that they promised to return one day. They have kept their word in the best possible way by including Waterford on their 40th anniversary tour this summer and on the June bank holiday Sunday too, which has always been a big day out for the ska, mod and scooter scene in the South East.

Madness are even bigger in 2019 than they were in 2013, playing to more people every year, including new generations of fans, at large outdoor shows (40,000+ capacity) in the United Kingdom and headlining legendary festivals like Glastonbury. They have just announced the Frank and Walters as special guests, another band who have had a lot of success over the last few years after their classic track After All found a whole new audience when it was used as the theme song for The Young Offenders TV show. Just as they did in 2013, local legends The Skazoo Allstars (aka Skunk) will be playing an hour of ska classics to warm everyone up.

Get your DayTripper tickets now!