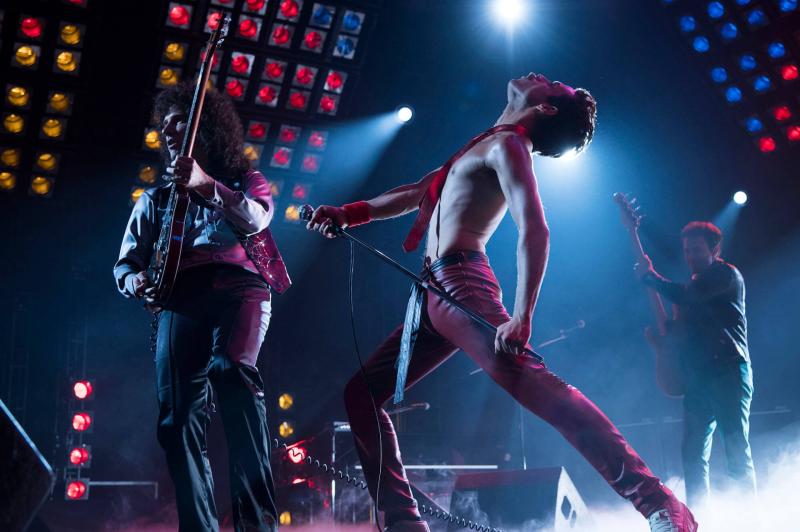 Outrageous, glamourous and utterly fabulous. Three words that could perfectly describe Freddie Mercury and his super famous rock band Queen in Bohemian Rhapsody, but does this dramatised biopic live up to these standards? In many areas yes and some others it’s a killer - and not in the good sense.

When seeing the trailers for this film, I will admit I had very high hopes and was thoroughly excited to see how well Rami Malek’s performance would be. So once the day came, I purchased my ticket, grabbed my popcorn and was ready to be mesmerized by the story of the rise of one of the biggest rock legends there is. And I was mesmerized, mainly by Malek. But only just Malek.

To start off, the film is fun. It really as glamourous as you would expect a Queen film to be, which is good because it certainly lived up to how it was marketed. It really does look fantastic, the whole aesthetic, costumes and some of director Bryan Singer's shots are just beautiful to look at.

It follows the story of Mercury, starting off as a bullied baggage handler in an airport, to his first gig, and all the way through up until Queen’s fantastic Live Aid performance. Already you can tell, with the two hours running time, you’re in for a packed story. And credit where credit’s due, I thought the movie went by quick enough, never was there a moment that dragged. But that’s also a bit of a problem with the film. It speeds through very quickly to the point where it was getting hard to keep up at times. It felt like a child in a sweet shop, who can’t decide on where to even begin, eats everything they can in a mad panic and then wonders why they feel so sick. Normally I don’t ask for a film to slow down in parts, but I felt it needed a breather at times, which was surprising from the amount of ‘serious’ moments the film had.

To give praise for the film though has to be Malek’s performance, which certainly has to at least win an Oscar nomination. The man is extremely talented actor and actually embodies Mercury down to the very last sparkle on those disco pants. His mannerisms, his look and accent - everything is perfect and is a true delight to watch. You can even tell that he’s having the time of his life playing the role and spews this energy out of the screen where you’ll find yourself singing and clapping along, especially in the ‘We will rock you’ and Live Aid performance.

However, it’s just Malek’s performance that truly stands out. While the film has a number of fantastic actors starring in important roles, everyone else feels a little two dimensional. I’m not sure if this was deliberate or not with the writing staff and producers, especially seeing as they had Queen members to liaise with during production.

The other three members just seem to be there to argue over how outrageous Freddie is being and then play their instruments. The line ‘we are a family’ kept getting thrown around throughout the film, but I never overly felt that until the end of the last act. I understand that this focuses heavily on Freddie, but it was a little odd how the other band members felt more like background noise to him.

Once I left the theatre, I did a bit of research on this film and the band itself. I would like to consider myself a fan of Queen’s music, but I didn’t know a huge amount of the band itself. Once leaving, I thought it was informative (and obviously dramatized but that’s expected). However, I discovered from other reviews that there are a number of errors in the story’s timeline, with some events being pushed a lot closer. Now I’m not that nit-picky towards this, mainly because it didn’t distract the viewing but it’s a heads up for any huge Queen fans that haven’t seen it yet. It is odd that they could timeline issues wrong when they had so much creative input from Queen themselves, but then again it’s a dramatized collection of events and I’m sure they were just being creative.

Bohemian Rhapsody is a film that’s certainly a fun flick that anyone could enjoy. It tells its story, albeit a bit quickly, but it puts on such a fun show you’ll find yourself humming Queen’s best hits for the following days (and why shouldn’t you? It’s Queen!). Malek is stunning and once more I think he deserves a place in the Oscar’s this year for perfecting such an iconic role. Well worth a watch!