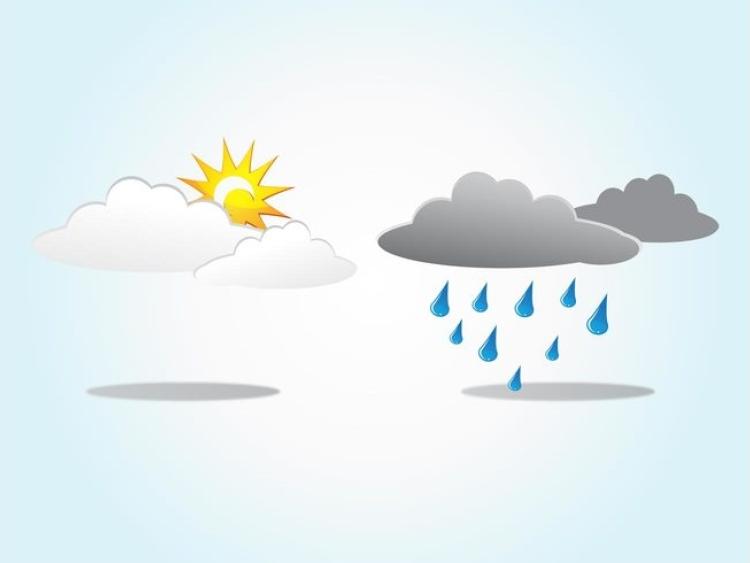 The weather forecast for the coming days from Met Eireann is for a mix of sunny spells, cloudy conditions with some rain around over the weekend also.

The weather forecast from Met Eireann for Friday says that it will be dry in many areas for much of the day with sunny spells, these at their best and most prolonged in the east. Cloud will gradually thicken from the Atlantic and outbreaks of rain and drizzle will develop in Atlantic coastal counties. Mild again with maximum temperatures 11 to 14 degrees in moderate to fresh southerly winds, strong along Atlantic and eastern coasts. Some patchy rain on Friday night, mainly in parts of Ulster and Connacht, largely dry elsewhere. Lows of 4 to 6 C., in moderate southwesterly breezes.

The weather forecast from Met Eireann for Saturday is for a few bright spells, mainly in eastern areas, but mostly cloudy. Some patches of rain and drizzle, in Atlantic coastal counties and later along southern coasts, with some mist and fog too, but largely dry elsewhere. Top temperatures 10 to 12 degrees, in mostly moderate to fresh southerly winds, but these strong along Atlantic coasts. Mild and wet overnight, with a few heavy bursts in places. Lows of 6 to 9 degrees.

The weather forecast from Met Eireann for Sunday says that there will be some rain in all areas for a time on Sunday morning, but brighter conditions, with sunny spells and scattered showers, will follow from the Atlantic during the late morning and early afternoon. Most of the showers will occur in Connacht, west Ulster and west Munster, where some will be heavy, with a risk of hail. Highs of 9 to 12 degrees. Sunday night will be cool, with clear spells and scattered showers. Cool, with a risk of a slight grass frost, with lows of 2 to 5 degrees.

The weather forecast from Met Eireann for Monday is for a bright and mainly dry with sunny spells, but some scattered showers also, mainly in parts of the west and northwest. Fresher than previous days, with highs of 8 to 10 degrees, in mostly moderate west to southwest breezes. Cold on Monday night, with frost, with lows of -1 to plus 3 degrees.