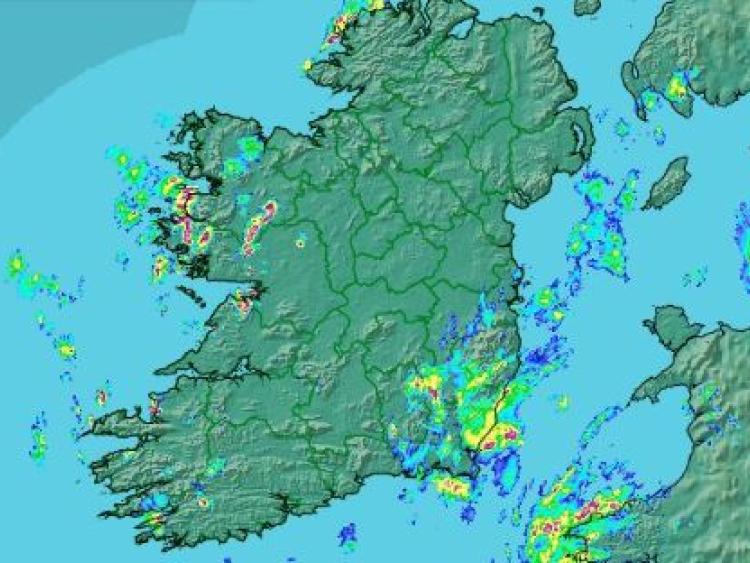 Met Éireann weather forecast for the week ahead

The national forecaster say that on Monday, "scattered showers in the south will become more widespread in the afternoon and evening." Some of the showers will be heavy and thundery with a risk of hail. Moderate southerly breezes will veer southwest later in the day. Highs of 9 to 12 degrees.

Here is their forecast for the week ahead:

A cool but largely dry and bright start to Tuesday, with good sunny breaks. Becoming cloudier and breezier as the day goes on, with outbreaks of rain and drizzle spreading from the west in the evening in freshening southerly breezes. Top temperatures 11 to 13 degrees. Tuesday night will be mild and breezy with outbreaks of rain spreading countrywide. Some heavy falls will occur, especially in western and southern coastal counties, particularly about high ground, with spot flooding likely. Moderate to fresh and gusty southerly winds, will be strong to near gale on coasts. Minimum temperatures of 9 to 12 degrees Celsius will occur early in the night, rising 12 to 15 degrees Celsius by dawn.

Wednesday will start out dull, damp and breezy but rather mild with outbreaks of rain and drizzle, heavy in places with spot flooding likely in parts of the west and south. The rain will gradually become lighter and patchier through the day and longer drier intervals will develop, especially away from southern and western coastal counties. Top temperatures 13 to 15 degrees Celsius in moderate to fresh and gusty southerly winds, strong at times in the coastal fringes. Mild and misty on Wednesday night with outbreaks of rain and drizzle continuing, mainly in southern and western counties. Drier elsewhere with some clear breaks developing and patches of mist and fog. Southerly winds will decrease moderate over land and back southeast, but will continue strong to near gale and gusty near Atlantic coasts. Lows of 9 to 12 degrees.

Often cloudy with occasional rain and drizzle in parts of the east and south but a lot of dry weather too with occasional bright spells. A spell of more persistent rain looks likely to affect Atlantic coastal counties, however. Maximum temperatures of 13 to 15 degrees in a gusty south to southeast breeze.  Mostly cloudy with patchy rain, drizzle and mist on Thursday night. Minimum temperatures of 9 to 12 degrees in light to moderate south to southeast breezes.

Many areas dry but rather cloudy. Occasional mist and drizzle will affect southern coasts, however. Highs of 12 to 14 degrees in moderate southeasterly breezes, fresh and gusty near Atlantic coasts. Lows of 10 to 12 degrees Celsius.

Present indications suggest mainly dry conditions over the weekend but rather large uncertainty with regard to cloud amounts. Sunday looking like the sunnier of the two days at this stage. Temperatures will likely remain a little above average for November but a little less mild than preceding days with somewhat cooler nights. Winds will be light to moderate easterly or southeasterly in direction.