This week marked the third anniversary of Anthony Foley's death 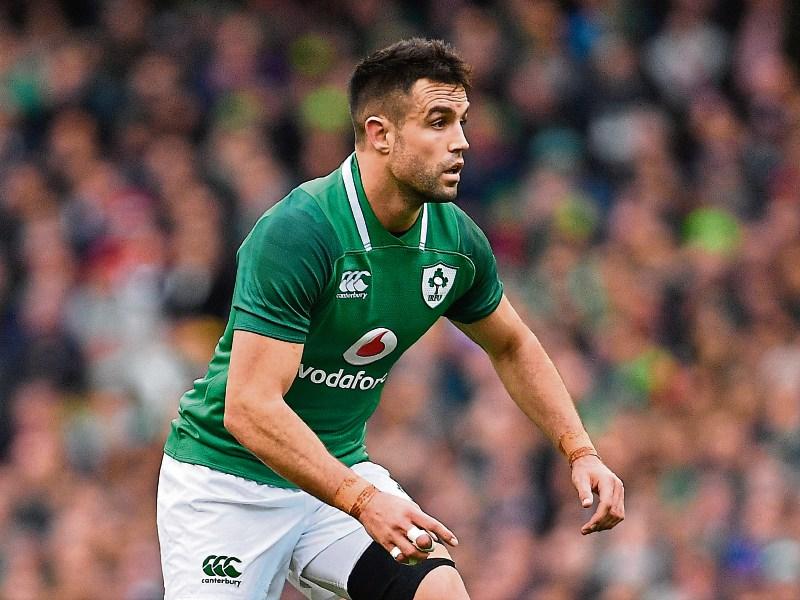 Win or lose against New Zealand on Saturday, Conor Murray will still make history once the first whistle sounds. He starts alongside Johnny Sexton for the 56th time, a record for Irish half-backs – but the partnership got off to a rocky start.

“In the lead-up to my first World Cup in 2011, we’d had a few arguments on the pitch - but I suppose that's how you iron things out,” the Munster scrum-half said on the eve of his 78th Ireland cap.

“He was there for a while and I was probably learning on the go at that World Cup - and there was a bit of miscommunication. But since then it's been really fruitful. I suppose we’ve had ups and downs, but more often than not we've gone pretty well together.”

Murray and Sexton will eclipse another famed Irish duo in Ronan O’Gara and Peter Stringer, but while the scrum-half will look back on the achievement with pride when his playing days are done, right now the only thing on his mind is how to get the better of the All Blacks in Tokyo.

Murray is one of only two starting players in Joe Schmidt’s team who didn’t play back in November 2018 when Ireland won the last chapter in what has become an enthralling rivalry. Twelve of Saturday’s side started that game and Iain Henderson came off the bench, but the injured Murray was forced to watch from the stand.

“I knew going to that game there was a chance that the lads were going to do something special - and it’s actually quite tough being there as a supporter,” he said.

“It’s a weird one to describe to people who don’t play. You’re obviously very happy for the lads but there’s a side of you - probably a bit of a selfish side - that would have liked to have been involved. Because you’ve been there before and you know the feeling of doing something special like that.”

Whatever the outcome in Tokyo, he’ll always have Chicago. Murray played brilliantly in 2016 when Ireland finally beat the All Blacks after 111 years of often agonising failure.

The late Anthony Foley – so movingly remembered before the kick-off that day after dying suddenly just a few weeks before – has been in his mind in the week of his anniversary.

“It's three years, isn't it, which is scary. And it's a bit of a reminder, when I saw it the other day, of what happened in Chicago. He played a massive part in that day, obviously, with the way we approached the haka [lining up in a figure of eight, Foley’s jersey number]. He has definitely been in my head this week.”

That unforgettable 40-29 victory at Soldier Field, with Murray scoring the third of five tries, was about self-belief as much as history.

“Up to that point, there was always that doubt. You have a certain amount of confidence, then, just getting past that roadblock - that's how I'd describe it. It's a massive boost of confidence - it shows you that they're human.”

The frailties in Ireland’s own game weren’t long in showing themselves after they beat the All Blacks for a second time, minus Murray. Defeats to England and Wales in the Six Nations brought forth suggestions that that had peaked a year too soon in the World Cup cycle, but the Munster stalwart insists they are all the better for that downturn.

“We had an honest review of that and we’ve come through. I definitely think we’re a better team than we have been and that’s no surprise. That’s the kind of environment we have - to push the limits and push each other, be honest with each other and try and get better.”

“We’ve built our way through this World Cup. Since [losing to] Japan, we’ve got better and better. There’s a good confidence about the group. There’s a good buzz around camp.

“It’s all become very real pretty quickly this week. It’s been an enjoyable week. We’ve trained very well, prepared well and we’re ready to give it a good shot.”

At his best, Murray is one of the world’s finest box kickers. Might there be an opportunity for him in peppering New Zealand’s inexperienced wingers – George Bridge (seven caps) and Sevu Reece (five) - with high balls?

“They’re relatively inexperienced, but two top-class athletes. They’ve forced their own way into the team. They’ve been so good that they’ve forced the coaches’ hand to be picked and they’ve performed pretty well, especially Sevu Reece. He’s been pretty outstanding.”

Murray’s own career began in similarly impressive circumstances, when he came from nowhere to establish himself as first-choice scrum-half at the 2011 RWC. When he and Sexton have found their best form, Ireland have invariably prospered – but it hasn’t always been a smooth ride.

“If you go through a few blips like performing as a team or individually not quite at your best, there is a little bit of self-doubt there,” the 30-year-old Patrickswell man said.

“In terms of this World Cup, to get your confidence levels in the right place, we have been steadily building and building.  You look back at the history of this team - we have been there and done it against big opposition and I think that's really exciting.

“It’s unusual for an Irish team to say that. I think, over the last four or five years, we have kind of earned the right to feel like that at times. It’s a confident group, a realistic group - and it's a good one to be involved in.

“I'm really excited about this game. These are really rare occasions that you get to do this, especially against the All Blacks in a World Cup. And we need to have a good bit of confidence about us, because we've done it before. A majority of lads have done it in the green of Ireland. You just don't want to be restricted - you want to just go for it.”

Ireland will expect nothing less when it’s game on in Tokyo, in a do-or-die encounter.