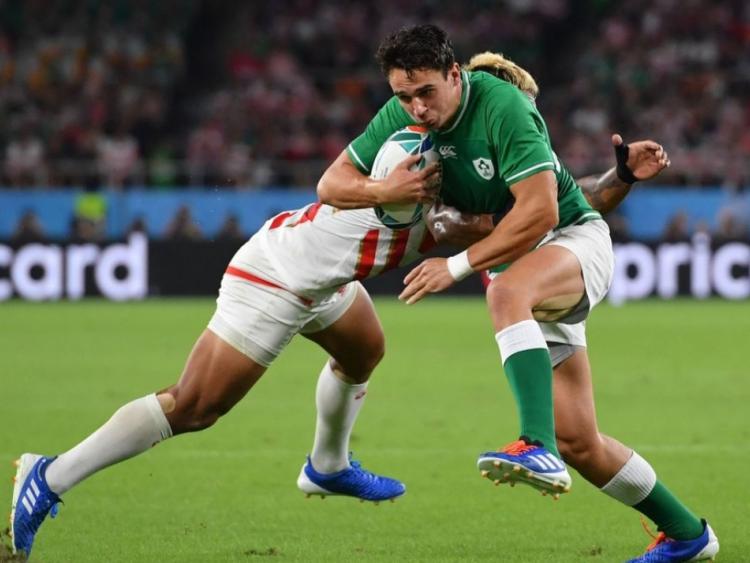 Joey Carbery believes he is finally ready to put injury frustrations behind him and reward the faith shown in him by Ireland coach Joe Schmidt.

If Carbery was not as talented as he is, he probably would not be in Japan. The fly-half was in dazzling form in the warm-up test against Italy in August when he sustained an ankle injury, pictured below, that could have ended his World Cup hopes.

He had not quite recovered when Ireland flew to Tokyo - and missed out on the opening victory against Scotland – but such is the 23-year-old’s instinctive brilliance that Schmidt was happy to wait.

"I was lucky enough to even be considered," the Munster player said on Tuesday. "They (the Ireland coaches) showed a lot of faith in me and I’m very grateful for it, so I want to repay that faith now. I want to go out and do the job and show them that they weren't wrong.”

Johnny Sexton, of course, has long been Schmidt’s go-to man in the playmaker position but Carbery has proved himself a formidable understudy and he is likely to be on the bench again when Ireland take on Samoa in Fukuoka on Saturday.

In 2018 he joined Munster from Leinster – where he was competing with the long established Sexton – with the specific intention of getting more game time in his favoured fly-half position. He started superbly, until injury halted his progress.

"It has been quite a frustrating year with injuries, but I'm fully back now," he said, while keen to downplay another setback during the warm-up against Russia which forced him out of the match-day 23.

"It was nothing major last week. It (his ankle) just took a bang, nothing more than that - it just needed a couple of days to settle down.”

Carbery saw action as a second-half replacement against Japan in the classic encounter in Shizuoka. Trailing 19-12 with the clock in red, Ireland were hanging on to a bonus point with Japan laying siege to their line.

Still, eyebrows were raised when Carbery kicked the ball dead, given that it was still possible for his team to salvage a draw and a second point.

"I knew we had the bonus point secured," Carbery said. "The ball came quickly enough to me. There wasn't too much on, so I just thought it would be the best thing to kick it out.”

Few if any Ireland players emerged with credit that day and Carbery was not happy with his own contribution, saying: "I was a bit rusty, I felt. Japan put us under immense pressure. They closed all our options off and suffocated us a bit.

"Huge credit to them because we couldn’t really do anything about it. To come out the wrong end of it was tough to take."

One of Carbery’s most impressive qualities is his decision-making on the run. "Just being able to see things a bit earlier as a 10 is pretty key," he said.

A sublime talent when at his free-flowing best and a player of huge potential, he could yet have a significant role to play in Ireland’s thus far faltering campaign.