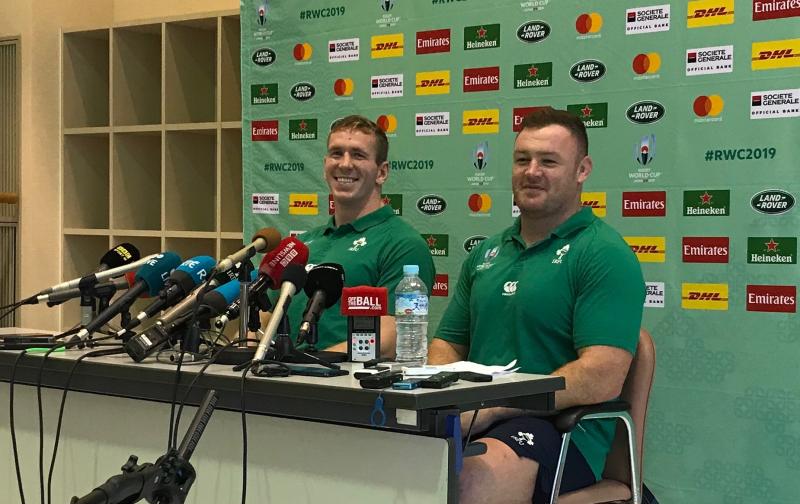 Not so long ago, Munster duo Chris Farrell and Dave Kilcoyne were seen as outside bets by plenty of judges to make Ireland's 31-man World Cup squad. Suddenly, they are coming up fast on the rails and challenging hard for starting places.

The rise of Farrell, pictured, a powerfully built centre with soft hands, is perhaps the more unlikely. He is competing in an area where Ireland have real quality and is up against the more established Robbie Henshaw, Bundee Aki and Garry Ringrose.

Henshaw’s misfortune in picking up a training-ground injury meant Farrell was selected for the bench against Scotland on Sunday and when Aki failed a head injury assessment early in the first half, the former Ulster and Grenoble man found himself on centre stage far earlier than he had expected, on a tumultuous evening in Yokohama.

"It was unbelievable, the amount of support we had there," he said on Tuesday. "To see Japanese nationals with the green colour on was outstanding and the noise they made for us during the game - and after the game when we went to thank them in the middle of the pitch - was exciting."

Farrell’s route to Japan was an unlikely one. At 21, he packed his bags after leaving the Ulster academy and took a gamble by joining Grenoble in France. Ireland has an unofficial policy of not selecting players who leave their own system, so Farrell feared his international ambitions might be thwarted.

Fortunately, Ireland’s Joe Schmidt is the kind of coach who spends virtually every waking hour thinking about or analysing rugby. After Farrell impressed in the Top 14, Schmidt made it his business to monitor him.

"I wasn't out there (in France) that long before I was in contact with Joe. He kept in touch and he sent me a bit of feedback from some of the games.

"That kind of feedback was something that really made me feel that maybe I should come back to Ireland." So he did, joining Munster and putting himself in the reckoning for his first World Cup.

"I never doubted what I was doing," Farrell said. "I took risks and it paid off. Coming back to Ireland I've improved, mostly at the basics. In France, they might not put so much emphasis on that. In these high-pressure games the basics ready to come to the fore."

Kilcoyne had a huge challenge on his hands to make the plane ahead of a Test Lion in Jack McGrath, now of Ulster. He won that one, has been arguably Ireland’s most improved player all year and now he’s relishing another contest - with Leinster’s Cian Healy for the starting spot at loose-head prop.

“The more lads you have chomping at the bit and giving coaches headaches, the better for Irish rugby,” Kilcoyne said, while sitting alongside Farrell at a press conference at Ireland’s training ground in Yumeria, near Shizuoka.

He came on against Scotland early in the second half and was soon part of a front-row that won a scrum against the head, with the Scots desperate for a breakthrough. It was a big psychological moment in the game and it gave Kilcoyne a lot of satisfaction.

He stands a good chance of starting against Japan on Saturday in Shizuoka and will be paying the host nation maximum respect if selected.

"We were very impressed with the performance against Russia,” Kilcoyne said. "You look at some of their finishers - Lemeki, Matsushima on the wing, Shota Horie at hooker. They have Michael Leitch - he has captained the Waratahs before and he's over here now doing an incredible job for Japan.

"They have threats right across the park. They play a very quick game, so we're going to have to deal with that tempo. We’re expecting very hot weather, so it's going to be tough for us."