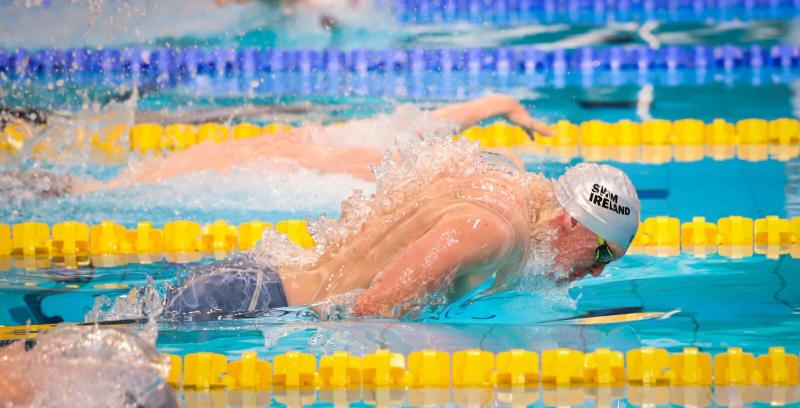 Swim Ireland’s Irish Open Swimming Championships starts this Wednesday (March 27) at the National Aquatic Centre in Dublin where Waterford swimmers will be hoping to qualify for this summer’s World and European Championships - just 18 months out from the Tokyo 2020 Olympic Games.

The Irish Open is the first step on the qualification pathway to Tokyo 2020, with swimmers who qualify for the senior World Championships offered a first chance to meet the consideration time for the games in July in Korea. 2018 European and world medallist Shane Ryan; European Championships semi-finalists Brendan Hyland, Darragh Greene and Conor Ferguson; and World Youth Olympic Games silver medallist Niamh Coyne will be among those chasing times to make the team. Greene, who became the first Irishman under the minute mark in the 100m Breaststroke at European Championships in 2018, has already been pre-validated for the World Championships following that performance.

2018 European Para Championship medalists Ellen Keane and Nicole Turner will be looking to get their consideration times secured for the World Para Swimming Championships in August. They will be joined by teammates Jonathan McGrath, Patrick Flanagan, Barry McClements, Ailbhe Kelly and Sean O’Riordan over the five days in Dublin.

Ireland’s junior swimmers will be looking to make the consideration times for the European Junior Championships in Russia, the European Youth Olympic Games in Azerbaijan and World Junior Championships in Hungary. National Centre Limerick’s Eoin Corby, who set Irish junior records in all three breaststroke events last month, will be one to watch as he looks to secure a place on his first international team.

Speaking ahead of the event, Swim Ireland national performance director Jon Rudd commented: “This will be a very exciting five days for all of us, with so many international places up for grabs across five different national teams. The Irish swimming community readily embraced our first ever sole Trials in 2018 and for those who qualify for the World Championships in Korea, they will find that they have their first opportunity at that time to put a firm foot in the door for one of the coveted 2020 Olympic Games slots."