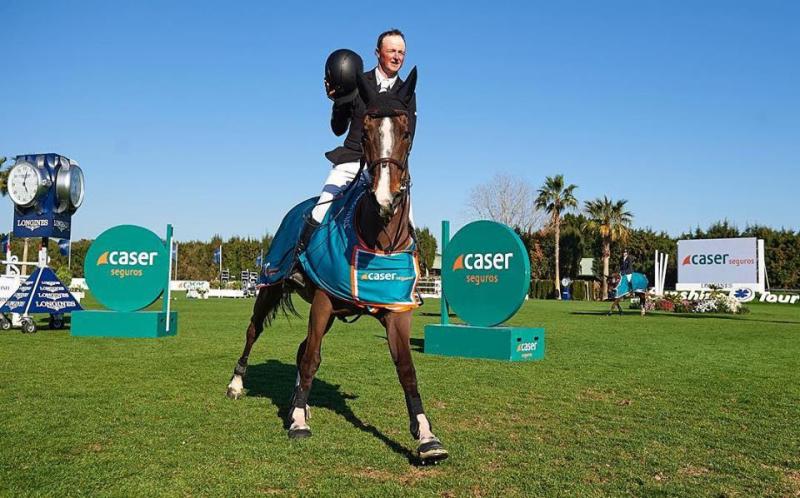 Waterford's Peter Moloney and Ornellaia at the Spanish Grand Prix

Just five of the 50 starters managed to jump clear in the opening round, with Colligan's Moloney joined in the jump-off by fellow Irish rider Billy Twomey with Lady Lou.

Moloney and the 14-year-old Ornellaia set what proved an unbeatable target of clear in 43.25 seconds to claim the winners prize of almost €23,500. Switzerland’s Carlo Pfyffer came closest to matching the Irish rider with a clear in 43.10 to finish second, while Twomey would also take fifth place for Ireland with Lady Lou.

Speaking afterwards, Peter Moloney was thrilled with Ornellaia who is a very recent addition to his string of horses.

“The mare felt amazing. This was my first show with her. I just jumped the small class with her on Thursday, jumped the ranking class on Friday and jumped clear, and I decided not to go in the jump-off and it paid off. It feels really good! She hasn’t jumped since November and she is new to me. We are still trying to figure her out, and this was an amazing result.”

There was also an Irish winner in the 1m45 speed class at the same venue. Sligo’s Richard Howley and Chinook took victory when finishing almost three second ahead of the second placed finisher. Tipperary’s Greg Broderick scored a runner-up finish in another 1m45 at Vejer riding Dabelle.

Meanwhile in the three-star Grand Prix at Vilamoura in Portugal, Peter Moloney’s cousin Anthony Condon was also in the prizes. He finished fourth with SFS Aristio after finishing with just a time fault in the first round.