Captain Johnny Sexton hailed a “very, very special day” for the whole of Ireland following a historic victory over New Zealand in Dunedin.

The impressive Irish set up a tantalising deciding Test in Wellington by levelling the series at 1-1 with a first away win over the formidable All Blacks.

Andrew Porter’s pair of tries paved the way for the landmark 23-12 triumph, with influential fly-half Sexton kicking 13 points to prevent a Kiwi fightback.

Out-of-sorts New Zealand, who coasted to a 42-19 opening win last weekend in Auckland, paid a heavy price for a disjointed and undisciplined display.

Their repeated indiscretions included replacement prop Angus Ta’avao receiving a 31st-minute red card for ploughing into the head of Garry Ringrose after Leicester Fainga’anuku and Ofa Tu’ungafasi had each been sin-binned.

“Any time you create a little bit of history it means a lot,” said Sexton. “It’s a very, very special day for everyone in the country.

“We talk a lot about making people at home feel very proud of us and it’s right at the top of our lists. 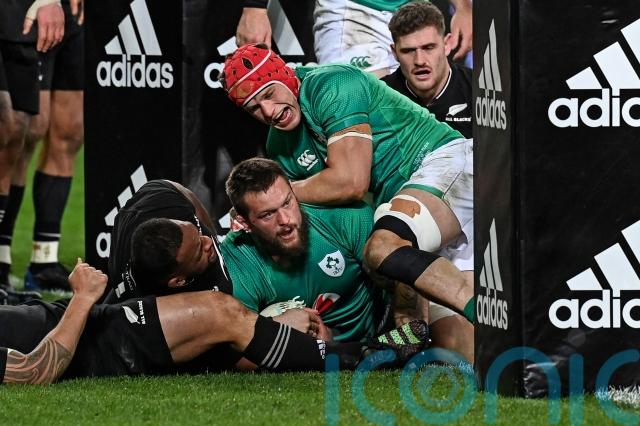 “I’m unbelievably happy with the win. No Irish team has ever done it before and it’s all on the line next week.”

Loosehead prop Porter powered over inside three minutes to give the tourists a dream start and an advantage they would never surrender.

Yet Andy Farrell’s men only led 10-7 at the end of a chaotic first half in which the All Blacks had replacement prop Ta’avao deservedly dismissed and lost Tu’ungafasi and Fainga’anuku for 10-minute spells.

Beauden Barrett’s improvised score brought the hosts back within touching distance, while a yellow card for Ireland vice-captain James Ryan temporarily evened up the numbers going into the second period.

Sexton, who satisfied concussion protocols to start and also played down concerns about “tweaking” a knee late on, admitted he feared the worst during the interval.

“The effort we put in last week, we didn’t get the rewards,” said the Leinster man, who turns 37 on Monday.

“Same effort again this week and it was touch and go at times – at half-time, I thought ‘oh my God’.

“But the reaction in the second half was superb; to score with 14 men, to bounce back like we did was great and we stayed in the moment.

“By no means was it perfect – we feel we could have played better in parts – but a very special day.”

Porter’s second try – only his fourth at international level – just after the restart calmed nerves before Sexton’s flawless kicking display guided the Irish home, prior to Will Jordan’s consolation try.

Head coach Farrell was left beaming with pride following the headline-grabbing performance of his “courageous” players.

“We talk a lot about inspiring people back home and these lads they keep turning up and knocking down doors,” he said.

“The most special thing about tonight is no other Irish side will get the chance to do that again, will they?

“We didn’t get sucked into the allure of the game of 13 men, 14 men, trying to play from everywhere. We kept them pinned down and the territory gain and the game control was outstanding.

“It was a courageous effort. We kept playing the right game and the right parts of the field and applying pressure and I’m just so proud of them.

“There’s a series to be won and we’ve earned the right to have a go at that.”