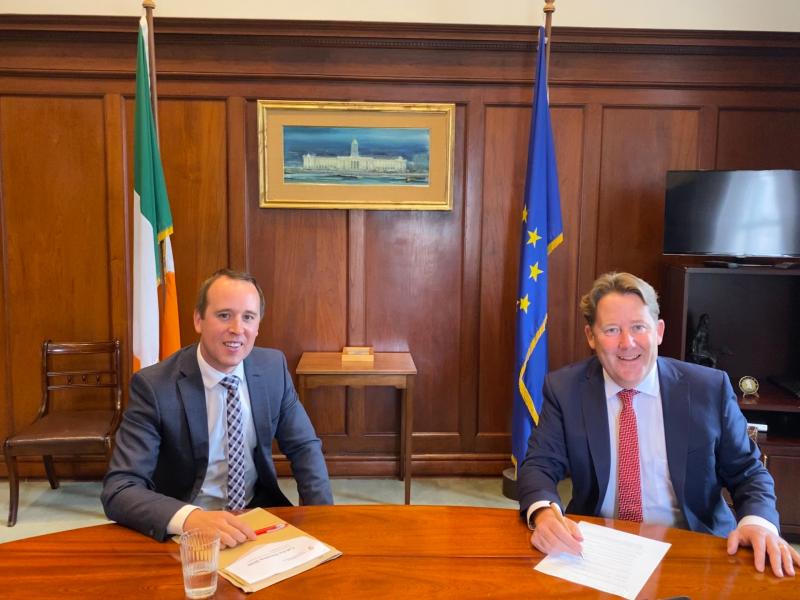 The North Quays project was central to the agenda when Waterford senator John Cummins met with Minister for Housing, Heritage and Local Government Darragh O’Brien.

Minister O’Brien has responsibility for the Urban Regeneration Development Fund (UDRF), the main funding stream for the North Quays project.

“We discussed a range of topics including affordable housing, the repair and lease scheme, right sizing of housing provision for older persons, and the increase in the monetary threshold for councils to build social housing directly without the need to go through the department’s phased approval process. I also used the opportunity to push for an early decision in relation to the URDF for the North Quays project,” Senator Cummins said.

“I had a very constructive discussion with the minister, and he stated his strong support for the North Quays project and his commitment to balanced regional development. He sees the huge potential the project will deliver for Waterford and the South East.”

In an additional meeting with the other Waterford Government representatives and department officials, Senator Cummins said that there was an acknowledgement by the minister that all four elements of the project i.e. the integrated transport hub, the sustainable transport corridor, the city centre access roads and the related service initiatives for Ferrybank/ Belview are integral parts of the project and are now being considered as a whole package of infrastructure. “We felt this removed any previous uncertainty around the funding for the transport hub, which has been a stumbling block to date,” Sentar Cummins said.

“I am satisfied from my recent meetings with Tanaiste Leo Varadkar, Minister of State Peter Burke and Minister Darragh O’Brien that there is renewed momentum across Government partners to progress this project. Under the public spending code, projects over €20 million are required to be assessed by the Department of Public Expenditure and Reform and this is currently underway.”

In a letter to Senator Cummins, Minister O’ Brien confirmed that he has ‘requested his officials and his colleague, the Minister for Public Expenditure and Reform, to expedite the technical evaluation of the Cost Benefit Analysis’. He added ‘a whole project funding support package is likely to be put before Government for consideration and approval in September’.