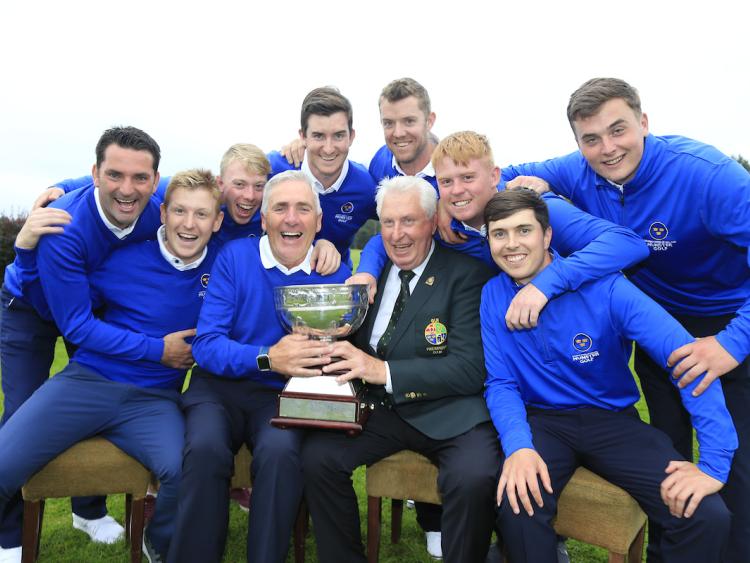 The 2018 champions from Munster

Munster will be the defending champions as Tullamore Golf Club plays host to the Men’s Interprovincial Championship from August 28-30.

Waterford's Eanna Griffin will be among the Munster ranks once again as he and his teammates attempt to emulate last year's thrilling victory.

Tullamore Golf Club has been the toast of major wins for Ireland’s finest over many years and the highly regarded Offaly course will this year hold the provinces in thrall as they seek championship glory.

The Men’s Interprovincial Championship, from August 28-30, will see defending champions, Munster, pursue back to back titles for the first time since 1997. Last year’s thrilling victory in Athenry broke Leinster’s stranglehold as Munster beat the reigning champions 6.5-4.5.

“There is massive rivalry among the provinces,” explained Michael Coote, returning Munster captain. “Leinster are always the ones to beat.”

Leinster looked on course to complete four in a row at the Interpros when they took a 3-1 lead from the final day foursomes against Munster. But the southern challengers turned the tables in dramatic fashion.

“We won 5.5 points from seven singles,” Coote recalled. “That’s unheard of. The spirit of the team was incredible.”

Mallow’s James Sugrue, who went on to win The Amateur Championship this summer, led the Munster fightback. Sugrue trailed in the top match against Leinster number one, Caolan Rafferty, but turned it around to win his match on 18.

“I walked away from James Sugrue’s match because he was in trouble after 13,” Coote revealed. “Next I heard, he won two holes in a row. It was like a wave of wins then.”

“It was a sweet, sweet victory,” said Coote, who has six of last year’s side for the trip to Tullamore. “For the players, the Interpros is a huge thing.”

Veteran Pat Murray (Clontarf) returns to the Munster side for 2019. South of Ireland champion Sean Desmond (Monkstown) and Greg O’Mahoney (Fota Island) have been rewarded for their impressive form this season.

Ulster, who finished second in 2019, are chasing a first win at the Interpros since 2013. Their side is spearheaded by Ireland international, Tiarnán McLarnon (Massereene). McLarnon has an enviable match play record and was Ireland’s leading player at the Home Internationals in 2018, winning a maximum six points. Ulster Stroke Play champion, Colm Campbell (Warrenpoint), returns to the fold after a year out injured.

Connacht count AIG Irish Close champion, Ronan Mullarney, among their eight-man line up. Mullarney, the pride of Galway Golf Club following that Close success, is the leading light for his province too.

“The Interpros is one of my favourite weeks of the year,” said the 23-year-old. “There is a lot at stake.”

On home soil, Leinster will be hungry to regain their crown. Three-in-a-row champions from 2015 to 2017, the eastern province will be able to call on Naas star Rob Brazill, who recently won the Bridgestone Order of Merit. Brazill, Alan Fahy (Dun Laoghaire) and Robert Moran (Castle) are the returning players from last year’s side.

Play commences at Tullamore on Wednesday, August 28. Each match consists of four foursomes and seven singles. The champions, Munster, play Connacht and Ulster face Leinster on the opening day.