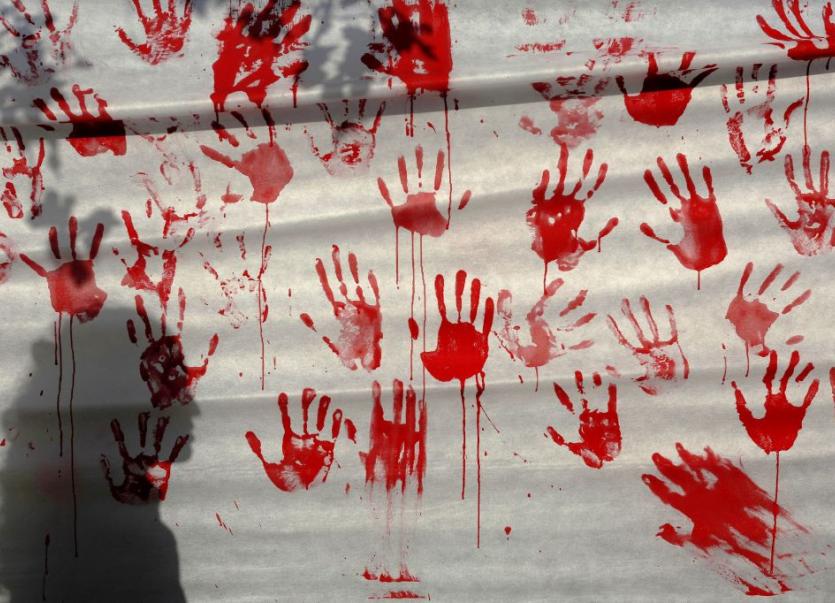 The protesters say services have 'blood on their hands'

Co-founder Leslie Hughes explains: "It’s been over a year now since Vicky Phelan exposed the catastrophic failures of the
CervicalCheck screening programme which led to over 200 women being diagnosed with cervical cancer when an original smear test had falsely given them the all-clear."

"Women have died and every woman in Ireland has been thrust into a frightening waiting game, am I next?"

In September 2018 Dr Gabriel Scally completed his scoping inquiry into the CervicalCheck Screening Programme in which he made 50 recommendations.

"The updates of recommendations were publicly displayed by the HSE, however, they only reported on and displayed
four with the last one in October 2018. In their last report, they say that it would take several weeks or months to put them all in place, the last update was almost a year ago," Leslie added.

"For far too long now there has been an air of ‘pass the buck’ amongst those who should be in the position to take accountability, reassure us and put plans in place that will see quality women’s healthcare. When you consider Ireland is the fourth richest country in Europe it beggars belief that the screening programme was put out to tender assumingly the cheapest option won because it certainly wasn’t for their high standards of practice."

"To add insult to injury the scandal, which escalated when 4,000 women were offered re tests with no concrete plan in place to cope with the volume, has gone from bad to worse and the women of Ireland are no closer to having faith in what was once hailed as a life-saving programme."

Fellow Mna na Deise member Marie Savage says: "We really have had enough of excuses and so-called administration errors. Recently there was a group of women who were retested but got no results back and upon highlighting the issue of not receiving their results it emerged that they were sent a letter, with incorrect results another administrative error."

"Some of those women tested negative but some have been reported to have positive cancerous cells. We simply have no trust in the system."

"Other countries are moving towards HPV testing, we would like to know why we are not following suit, does it come down to financing this specialised training? Who knows."

The women’s health group which has a team of five women from both Waterford city and county, including fellow cofounder Cathriona English, Margaret Julien and Haide Vysniauskaite, formed last year having met through another women’s cervical cancer support group and various other campaigns.

When they realised the need for a safe space for women to talk about their health and share their experiences and fears they decided to come together and focus not only on major health campaigns but local issues too. From September they plan to do a monthly meet up group discussing everything from mental health and menopause to positive parenting.

"We have had enough of this and we are ready to make some noise," Cathriona English said.

"When we heard the latest story about Claire Healy Cashin being refused because she had gone private for her smear test we knew we were doing the right thing. Women are being forced to go private for the test or they could be waiting so long for the CervicalCheck results that it’s too late."

For more information on the Scally report go to www.scallyreview.ie and if you would like to learn more about Mna na Deise please go to @mnanadeise on Facebook.