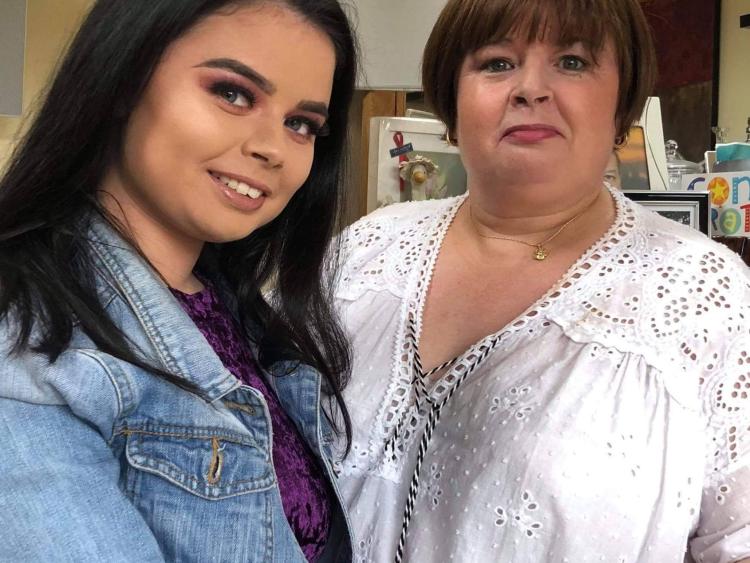 Ainie and Priscilla Grainger from Dublin

A woman who suffered horrific domestic violence is urging other victims across Tipperary and Waterford to “trust somebody, make a plan and get out of an abusive relationship”.

Priscilla Grainger was an only child who grew up in North County Dublin. She was streetwise and a hard worker, helping out at her parents Leitrim Lodge Dublin guest house.

“I wasn’t born with a silver spoon in my mouth. I was reared to learn and work hard in an honest and honourable way,” Priscilla tells Waterford Live.

“I had a close, unique relationship with my parents Pat and Ann. Being an only child, I would have spent a lot of time in adult company and was very grown up for my age. I lived an ordinary but great childhood. It wasn’t an overprotective childhood because in those days you were allowed run fields and come in dirty and there wasn’t any such thing as phones. I had a real good attitude to life and nothing ever got me down,” she continues.

Priscilla never had any serious relationships throughout her teenage years. She had lots of girlfriends and enjoyed dancing the night away at venues in Dublin.

She met her now ex-husband at a bar in June 1989, weeks before turning 22. They got chatting, clicked and she invited him to a family party in what she describes as “the beginning of the end”.

Priscilla recalls: “He was a good looking fella, very generous and charming. He told me straight up that he planned to go to Australia for a while and when he went we wrote to each other all the time.

“He came back from Australia after nine months in 1991, our relationship developed and we got engaged in 1993. I had a major thing about my parents and always said to him ‘you come from a large family and I don’t. At Christmastime I cannot leave my parents. They only have me and I only have them’. He understood that and got on very well with my parents. When I met him he didn’t know how to drive and my parents paid for driving lessons for him as a Christmas present. They always supported and encouraged him”.

In hindsight, Priscilla feels she was "naive" to get married in 1995, despite describing him as “the perfect gentleman” up until then. “I thought he really liked me, but I made the mistake of never living with him before we got married. My friends have also since said they use to see him going in and out of the bookies all the time. My parents financially helped us as well by giving us £5,000 as a wedding present while his parents gave £120. His family didn’t like me because I was very independent. I was running a guesthouse for my parents, working three jobs and saving to get a deposit for a house. I really should have smelt a rat and realised he was only in it for the money”.

They jetted off on honeymoon to Florida, where horrific physical and psychological abuse started to unravel. “We went out for meal on the second night and I didn’t bring my passport. We went into a bar down in Clearwater in Florida and the server asked me for I.D. When they wouldn’t serve me a drink, he didn't offer to go back to the hotel to get my passport and I had to sit there for three hours watching him drink while I had coke. I now realise that he was controlling me.

“We later went back to the hotel and he offered to go up and get my passport but at that stage I just wanted to go to bed. He came up after me and said ‘don’t you ever f**king leave your husband down at the bar’. I thought he was joking until he grabbed me and fired me on the bed. I knew I was in trouble and felt so sick and extremely lonely around him after that”.

The beatings continued throughout the honeymoon period and even while Priscilla was pregnant. “I left him four months into our marriage after a beating. I told my parents he was gambling but I didn't tell them he was hitting me. I then became pregnant and he abused me during my pregnancy a couple of times. It stopped when Ainie was born and it would kick-off again every time I questioned where the money was going. We were in arrears with our mortgage and a new baby coming into the world didn’t help financially because we weren’t in the right place”.

Priscilla's ex-husband then began controlling her, wreaking havoc on her emotional and psychological well-being. “He started becoming jealous of the baby because I was giving her my time, feeding and changing her, and giving her the attention he had gotten before.

“He would come home from work, I would be after having a bad day as a first-time mother and the house would be in disarray. I wanted a dishwasher but wasn’t allowed to get one until Ainie was one-years-old. He would say ‘what the f**k do you need a dishwasher for? Use the sink’. The mental abuse was shocking. There would be a row if I left on the immersion or the light in the bathroom.

“As the years went on my father became ill and I was looking after him. I was in the routine of going to work, coming home and doing what I was told. He would have my dinner made in the evenings and he made sure I didn’t leave the table until it was finished”.

Priscilla felt trapped in the abusive relationship. “I was in a difficult situation and there was no refuge. I had a young child and nowhere to go. My dad was very ill and this was my sh*t and I had to deal with it. It was stupid of me to think that because my parents would have taken me in.

“I began pigeonholing the abuse and got on with it. Every decision I made was in the best interest of Ainie and I. On Christmas morning I would tell him that Santa had come to Ainie, but he would just stay in bed which really hurt me for her. Everything had to be circled around him. He wasn’t a people's person and the only company he liked was mine because he could control me.

Priscilla felt “ashamed” that her marriage was failing. She tried to leave him on occasions but he always managed to groom her back in. “I left for my parents holiday home in Leitrim on New Year’s Eve in 1998 and drove down to them at 7am in the morning not knowing what to do. I rang my ex-husband’s brother, telling him what he was doing to me and about his gambling problem. My ex-husband then rang me and said if I didn't come back he would commit suicide”.

Priscilla hired a private investigator and discovered her ex-husband was having an affair in 2007. “That same day my father died in my arms and went to his grave not knowing he had lifted his hand to me. My father adored the ground I walked on and would have gone gung-ho if he found out about the abuse”.

But Priscilla stilled loved her ex-husband and decided to give their relationship another go in 2008. She found herself in savage debt over his gambling and lost the family’s guest house business of 33 years.

Finding herself in a very dark place, Priscilla found a rock of support in her mother, Ann Brady who is originally from Ballinamore in County Leitrim, after revealing everything she had been through since the second night of her honeymoon. She eventually kicked her ex-husband out for good in 2012 and with the support of counsellors became detached from him. “He had thrown me against a radiator and broke by jaw. I was asked by the doctor if I had been in a car accident because my injuries were equivalent to someone who had been in a head-on collision at 100m/h. He damaged my back, fractured my ribs and broke one of my ribs as well - but I still loved him. It took me three years not to love him because he had me so well groomed and brainwashed,” Priscilla admits.

Priscilla began rebuilding her life and eventually got their divorce finalised last December. “It wasn't easy and it took a long time to get the banks to work with me because I was in savage debt and had no car. My crediting was sh*t and every door I turned to slammed in my face.

“I took in students and Ainie and myself slept on a mattress on our kitchen floor so that we could use the money to pay our mortgage and put food on the table. We lived in our sitting room for two and half years with a fridge, toaster, cooker and kettle”.

She has since managed to reopen Leitrim Lodge Dublin and Cully Cottage guest house in Ballinamore. She also opened Leitrim Lodge Castleknock earlier this month.

She adds: “Domestic violence is not a crime. The guards can’t do anything, unless you have a safety order in place, and are not trained to deal with it in rural Ireland or even in Dublin.

“You need to plan your exit because when you get out of a marriage people don't want to be listening to you. Trust one person and ask them to keep a diary for you. You will need them until the very end because they will know the pattern right through.

“Mentally, get out and join a class or go for a walk with a friend. It’s not easy for someone to leave their family home. Victims don’t go outside and your home becomes your castle, a sanctuary of security. I didn't go out for years and found it hard to even go around the corner to the shop to buy a newspaper. Us victims don’t sleep at night because our protection aerials go on, so we take catnaps during the day to catch up on our energy and comfort eat to get over the abuse from the night before.

“Abusers should be put out of the family home immediately, not the victim. There are lots of supports out there that I didn't know about like Aware who give free counselling for depression which is common in domestic violence.

"If Ainie and I could do it anybody can.”

Priscilla will feature in TG4's TABú: Ag Teacht Slán on Wednesday, November 21, at 9:30pm. The documentary gives personal accounts of domestic abuse and the realities of a life in an abusive relationship.