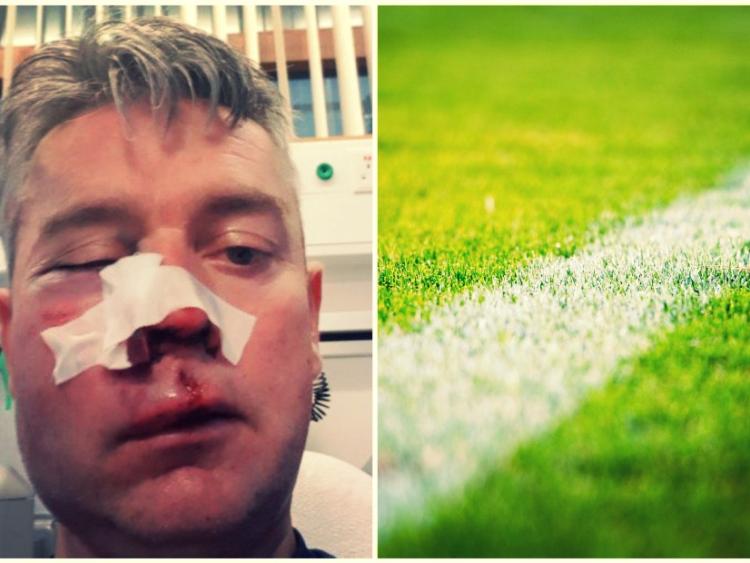 The vicious attack on soccer referee Daniel Sweeney in Offaly this week has started a very important conversation.

Although the game between Horseleap United and Mullingar Town was not an underage game, the incident raises a question about behaviour on the sidelines of schoolboys, girls, schools and underage matches, particularly in soccer and GAA circles.

Four grown men assaulting a referee over a contentious red card call; what has that got to do with kids playing the game? This is not just about one isolated incident. This is about a growing culture of violence in sport, an infection being spread from one generation to the next.

This is also about Daniel Sweeney; it is about an underage player being knocked unconscious at a hurling game in Laois; it's about the GAA referee chased off the pitch in Croke Park in the 2010 Leinster Football Final; it's about a series of brawls among players and supporters in the GAA in recent months; and it's about the Dublin District Schoolboys League fearing serious injuries or deaths at their games in recent weeks.

Grainy footage of a cluster of players punching, shoving and dragging each other, aided at times by water carriers, spectators and even team officials, has become all too common in the modern age of social media. Indeed technology has a role to play here; a very positive one that opens up a previously accepted source of violence in Irish sport once parochially passed off as 'only an aul scrap.'

VIDEO: A recent example of mass violence from the Kerry Football Championship

We see violence regularly now behind play buttons in our social media newsfeeds; Tyrone, Kerry, Laois, Offaly, Dublin, the epidemic knows no bounds. It is not a problem confined to adolescent boys or young men, or one particular sporting arena. It is widespread and now we have the proof.

Violence against officials or opposing players is not a modern phenomenon as some commentators would have you believe. It's not the fault of violent TV series, video games or social media. It's not even the fault of Conor McGregor and MMA. So where can we find the root to stop the rot before someone is killed?

A 10 or 11-year-old doesn't naturally shout abuse at a grown man or woman officiating a game. They look and pique their ears towards the sideline, and it is there we find a seed of violence that seeps into their psyche. Often it's abusive language, the call of 'Ah ref! followed by a litany of expletives; it's intimidation, hostility, disrespect - and it's rife.

Even in the 1990s and early 2000s when I was growing up playing, or attempting to play underage soccer and GAA in the Midlands, there were 'mouthy' parents. They probably knew the referees from the area or the next village over, and he was a 'gobshite', a 'dope', a 'useless prick,' and above all, it would seem, a figure of absolute contempt. The violence or vile tongue-lashing was not exclusively reserved for the referee, either; it was for opposing players, also kids, officials and fellow parents on the opposite sideline.

The back-and-forth often rasped over our heads on the pitch as we played a game we loved, at least when the first whistle sounded to start the game. It sometimes turned physical too, and while on the pitch as a young teenager, I witnessed one team supporter parade around the perimeter to throw an opposing one into a ditch beside the field.

As a reporter, I have covered matches in GAA and soccer in a host of counties and witnessed similar behaviour, often at underage matches where the atmosphere was once so visceral, the referee issued a verbal warning to the entire attendance. This particular referee proclaimed he would walk out of the field unless “people kept their mouths shut” on the sideline. A number of the players echoed his calls as a somewhat amusing scene unfolded whereby children chastised parents, grown adults, from the pitch in the middle of a game.

There is no smartphone evidence of any of this so I guess in the eyes of the authorities, these incidents never happened, and weren't replicated or near-replicated on sidelines up and down the country in both soccer and the GAA. The reality that has been around for years is only now being revealed.

Despite the principled young players referenced in the above anecdote, it's fair to say that the behaviour of spectators and some parents at underage matches does affect children. Violence, be it physical or verbal, is, after all, learned behaviour. The mass brawls in the GAA recently at various age groups, and the concerns of the Dublin District Schoolboys League, for example, have not come about by coincidence.

As young kids, we often received dressing room talks from managers and mentors to respect the referee and our opponents. Win, lose or draw, the captain of our underage GAA team was brought into the opposing dressing room to acknowledge and thank the other team for the game. Indeed now, authorities run respect campaigns for young players all the time.

Sadly, it's a culture festering on the sidelines that needs to be addressed. Similar campaigns have been run for parents to be less vocal at underage matches, but without repercussion, what's the point? You can't reprimand an adult for calling a referee a 'bollocks' or goading a player on an opposing team, not meaningfully anyway. They might be told to leave the field but with no punishments, when the next game comes around, there they are again.

Individuals can get away with behaviour like this but it's time for leagues to take action against clubs. It seems harsh to suggest a team or club be excluded from a competition because of the behaviour of a spectator, but it may be the only way to affect change.

Serial offenders should be reported and banned by the clubs from their grounds in the first instance, but if a referee reports unseemly or violent behaviour from the same club's supporters more than three times, that club should be punished severely.

This type of change can only come from the likes of the FAI and GAA, who now, with the onset of modern technology shining an uncomfortable light on the problem, may be embarrassed into action. It is up to them to set the agenda; it is up to referees, clubs and fellow supporters to report offenders, document their actions and have them banned from games.

It's time to scrub the stain of sideline violence and what it fosters from our sporting fields once and for all.