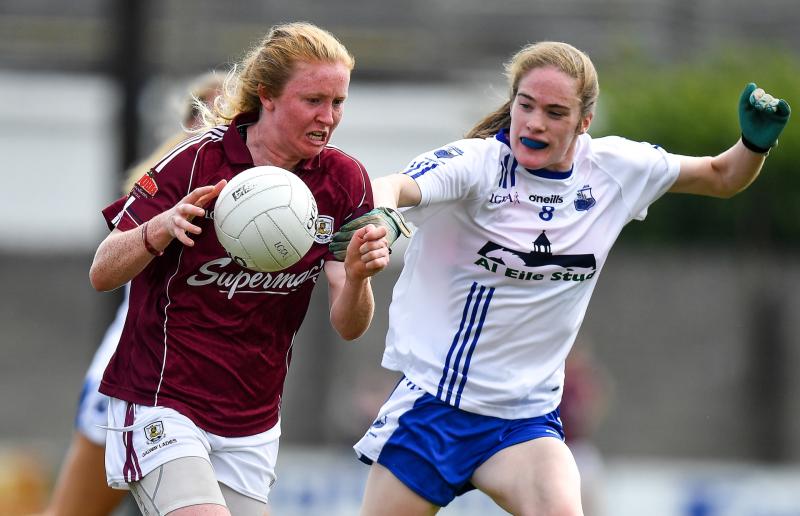 Waterford were simply outclassed as Galway secured their TG4 All-Ireland Ladies Football Championship quarter-final spot with
a comfortable 16-point victory over the Déise in Birr at the weekend.

First half goals from Leanne Coen, Roisin Leonard and Ailbhe Davoren ensured Stephen Glennon’s team took a final eight spot with one round robin fixture to come, while Pat Sullivan’s charges will contest the relegation play-offs.

Tracey Leonard got Galway off the mark after only 20 seconds and the Galway captain added two further frees by the eighth minute to lead 0-3 to 0-0. Galway were in control and guilty of spurning other chances with Aine McDonagh getting through but she was brought down before having a shot.

Waterford opened their scoring on ten minutes when Katie Murray finished a three-player move involving Michelle Ryan and Maria Delahunty. And Ryan was causing problems getting two more points from play by the 17th minute.

However, that was only to reduce their deficit to 1-5 to 0-3 as Galway carved open the defence on 12 minutes with Ailbhe Davoren picking out Leanne Coen to her right, her low strike registered their first goal.

And after a poor Kelly Moroney kick out on 21 minutes, Roisin Leonard lobbed the goalkeeper for Galway’s second goal. On the next attack, Louise Ward supplied Davoren who hit the far corner of the Waterford net. Delahunty added a Waterford free but Olivia Divilly’s score gave the Connacht champions a 3-6 to 0-4 interval lead.

The second half lost its bite as both managements emptied their benches with the result already decided. Mairead Seoighe kicked two Galway points either side of an Emer Flaherty white flag to make it 3-9 to 0-4 before substitute Sarah Conneally also contributed twice by the 50th minute.

Waterford’s sole second half point came from Eimear Fennell on 52 minutes as they desperately chased a consolation goal but the Galway defence held firm. Leonard got the last point seven minutes from time while Seoighe nearly struck a fourth
green flag only to see her effort go wide of the post.

Galway face Westmeath next Saturday with the winners meeting Dublin or Mayo in the quarter-finals on 12 August.