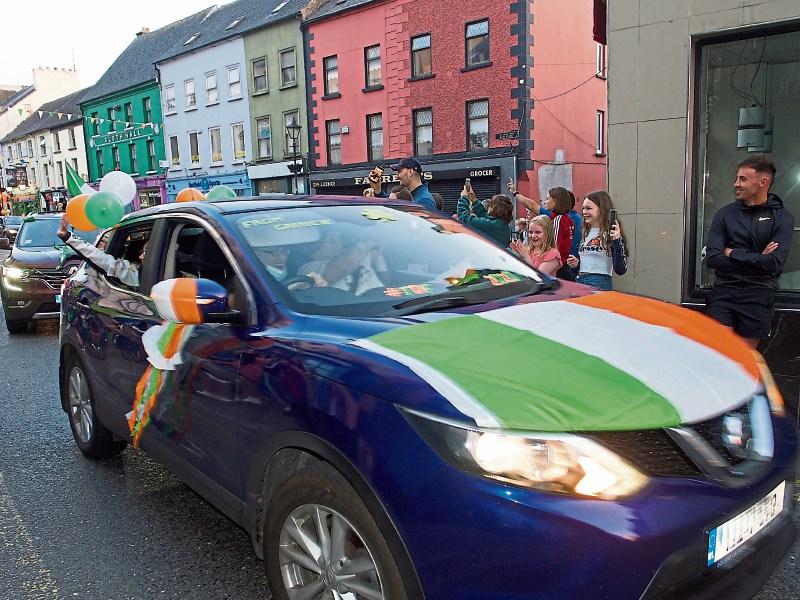 The colourful horn honking  cavalcade was greeted with appreciative cheers and applause on its journey through the town Chants of “Sam, Sam, Sam” and “Let’s Go Sam” came from children dressed as if for St Patrick’s Day.

In a year when Carrick-on-Suir and every  Irish town had little to celebrate due to Covid-19, this spontaneous outburst of community joy on a balmy September evening was a sight to savour.

Helen Bennett said her family very much appreciated all the messages of congratulations people have sent them and Sam.  “I think Sam is overwhelmed with the support he has received from home. It means a lot to him,” she said.

The cavalcade was organised by Darren Lyons of Lyons Bus and Coach Hire.

“I never thought we would get another Sean Kelly in my life time, never mind one who also comes from Carrick-on-Suir. It’s amazing,” he declared.

Despite being organised at short notice, the parade attracted an impressive 30 cyclists and 15 green, white and gold decorated vehicles.

The banner on the bonnet of Carrick’s OK Cycles bicycle shop van declared:  “Maillo 4 Sam” and “Go Sam Go”. A Honda car sported a child’s bike on its roof being cycled by a Minion teddy dressed in a green jersey while an array of large cuddly toys dressed  in Carrick Wheelers jerseys were strategically positioned around the exterior of another car.

Martina Walsh of Collins Park and Margaret Maher from Castletown, Carrick watched the spectacle at the West Gate.

“He’s an amazing young lad. We are so proud of him. It’s a great achievement for Carrick,” said Margaret.

Across the street stood Sam Bennett’s granny Sylvia Bennett from Carrickbeg.  “I am amazed at all the best wishes we have received from all the people of Carrick-on-Suir. They were enough to push Sam over the finish line,” she quipped.

Mrs Bennett confessed she was too nervous to watch Sam’s final stage victory in Paris on the television but she has taped it and planned to watch it all when she returned home.

Sam Bennett’s mother- in- law Gaye Fogarty, brother-in-law Shayne Fogarty and first cousin Ellen Ryan-Bennett also enjoyed the street celebration.  Gaye said she watched every second of the Tour de France and was so proud of Sam’s performance. And she assured The Nationalist: “He is as brilliant off the bike as he is on the bike.

“He is a lovely son-in-law and lovely person to my daughter Tara. They are going back to Monaco today but we can’t wait to see them back here hopefully sooner rather than later,” she added.