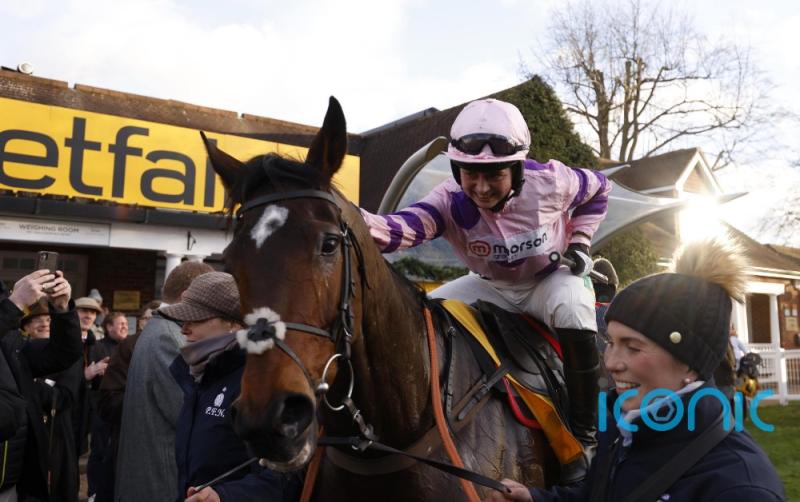 Bryony Frost left behind an emotional few days to pilot Greaneteen to a superb victory in the Betfair Tingle Creek Chase at Sandown for trainer Paul Nicholls.

Frost has been at the British Horseracing Authority’s headquarters in London this week, giving evidence relating to the charges brought against Robbie Dunne of prejudicial conduct and violent and threatening behaviour towards her, all but one of which he denies.

Starting at 12-1, Frost and Greaneteen travelled handily through the two-mile Grade One contest until he was ridden to take up the lead over the penultimate fence.

From there he pulled further and further away from stablemate Hitman, and eventually crossed the line five and a half lengths ahead to give Nicholls a one-two in a race he was winning for the 12th time. Hot favourite Chacun Pour Soi was a major disappointment.

Frost said: “I got over the last, but it felt a very, very long way up the hill! We were riding for everything we were worth.

“I can’t speak. I landed over the last and thought ‘I’m going to get caught, somebody’s going to come and get me. I can hear them, I can hear the crowd!’.

“We won the Tingle Creek. I absolutely can’t believe it.

“I can’t tell you what it (reception from the crowd) means, to feel the support of everyone here is huge.

“I ride horses and it’s the best life. I can say I do that as a job. It’s quite special and it’s the best place to be when you are galloping out on track. That’s the place you’ve got to take yourself, it’s what I’ve done since I was little.”

She added: “They knew he was 100 per cent right today and the team at home is phenomenal. I couldn’t do this without the team, Paul and his training. Paul said this was the horse that was coming here for this.”