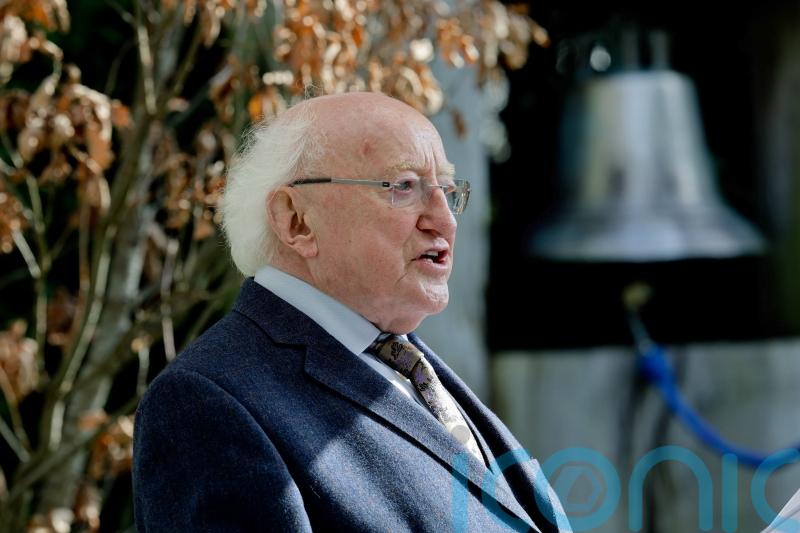 The president has led tributes to a young Tipperary hurler who died after collapsing during a match.

Michael D Higgins described 24-year-old Dillon Quirke’s death as an “inestimable loss” not only for his family and friends but the entire community.

Taoiseach Micheal Martin said he was “shocked and saddened” by the death.

Mr Quirke was playing for his club Clonoulty-Rossmore against Kilruane MacDonaghs at Semple Stadium in Thurles on Friday evening when he collapsed.

He received medical attention on the pitch before being taken to Tipperary University Hospital in Clonmel, where he later died.

The county senior hurling championship game was abandoned by the referee following the incident.

Mr Quirke has been described as a “smashing person” who was “taken far too young”.

Mr Higgins said on Twitter: “As President of Ireland, I wish to express my deepest sympathies on the passing of Dillon Quirke.

“This is an inestimable loss not only to his family and friends but to his entire community to which he was making such a contribution.”

Mr Martin wrote on Twitter: “Shocked and saddened by the passing of Dillon Quirke.

“My deepest sympathies to all his family, friends, his teammates and all the community in Tipperary.”

“Dillon became ill during Friday evening’s County Senior Hurling Championship game between Clonoulty Rossmore and Kilruane MacDonaghs in Semple Stadium and was taken to Tipperary University Hospital in Clonmel where he passed away.”

Tipperary GAA thanked all those who treated Mr Quirke at the stadium and at hospital.

It has called off all games due to take place in the County Hurling Championships this weekend as a mark of respect to the player.

Former Tipperary hurling manager Liam Sheedy described Mr Quirke as a “smashing person” on and off the pitch.

He said all of the GAA family are “numb at the news”, adding his thoughts and prayers are with Mr Quirke’s family.

In a post on Twitter, it said: “The family, friends & teammates of Dillon Quirke are foremost in the thoughts of players across Ireland.

“We can’t imagine your pain but will walk with you & support you in any way we can.

“Rest easy Dillon. We mourn your loss & celebrate your life. You will stay forever young.”

South Tipperary GAA said he was “taken far too young”.

It said on Twitter: “The thoughts of everyone connected with South Tipperary GAA are with everyone in Clonoulty-Rossmore tonight on the tragic passing of Dillon Quirke. Taken far too young. RIP.”

GAA president Larry McCarthy also offered his sympathies to the family and friends of the underage All-Ireland medal winner with Tipperary.

Mr McCarthy said: “There is a ​huge sense of ​shock across the GAA community at the tragic loss of Dillon, who had already achieved so much in his young life.

“He was a young man in his prime, with so much potential and promise, and on behalf of the GAA family I would like to extend my sympathies to Dillon’s ​father and mother, Dan and Hazel, and his sisters, Shannon and Kellie, at what is an unimaginably difficult time.”