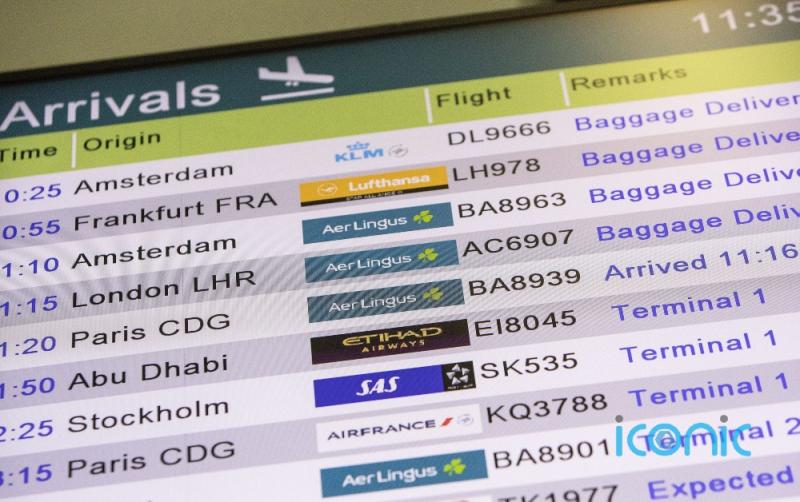 One hundred passengers have entered Ireland without a negative Covid-19 test since new rules were introduced on Sunday, an Oireachtas committee has heard.

Fears over the Omicron variant brought about the introduction of fresh restrictions on travel, requiring all travellers to Ireland from overseas to have a negative PCR or antigen test.

The Oireachtas Committee on Transport heard on Wednesday that since the rules came into effect, 100 passengers arriving at Dublin Airport have been referred to Gardai for failure to comply.

Those arriving without tests were required to undergo a Covid-19 test and self-isolate.

Despite the arrival of passengers without negative tests, the committee heard there were no penalties for airlines that failed to ensure their passengers had valid tests.

“The obligation in the first instance rests with the travelling passenger, but the airline at the point of boarding carries out checks that each passenger has a receipt indicating completion of the passenger locator form and a negative test,” said Fintan Towey, assistant secretary at the Department of Transport.

“There is a legal obligation for carriers to carry out the checks, but it’s not a penal provision.

“So carriers don’t commit an offence if they allow a person to board inadvertently without the required test.”

Mr Towey said it was likely that legal issues would arise if it was made a criminal offence for airlines that failed to ensure passenger compliance.

“What we’re trying to ensure is that we have a system that works and provides appropriate levels of safeguards,” he said.

“I think that if we wanted to devise in legislation an offence provision, in relation to the role of carriers, I think that would bring us into a lot of legal difficulty, in seeking to identify exactly what the requirements would be, and  what an offence might be for carriers.

“It would also open up the issue of what kind of data retention carriers might need to engage in order to defend their conviction, in terms of checks that might be carried out in relation to any individual or passenger.”

Oonagh Buckley, assistant secretary at the Department of Justice, said there was generally a “very high level of compliance” among passengers and airlines.

She added: “The new requirements or checks have only been in situ since the early hours of Sunday morning.

“In that time, though, to offer some reassurance to the committee, some 80,000 passengers had immigrated through Dublin Airport.

“We referred in those three days only 100 people to An Garda Siochana for failure to comply with the test requirements.”

She said that of that number, around three-quarters arrived in Ireland from Great Britain, in small numbers and spread across numerous flights.

“The majority would have been on Irish airlines,” she said.

She added: “I can’t really say how they got through. We’re not standing over boarding procedures in other airports, in other countries.”

She said that throughout the pandemic “there will often have been one or two, people do manage to get through”.

“It’s not that that’s deliberate, it’s just that people are rushing or people are busy,” she added.

“I wouldn’t necessarily say that there’s anything particularly malign about it in that regard.”

Committee chairman and Fine Gael TD Kieran O’Donnell called on the officials to engage with the airlines on the need for substantive checks.

“I’d ask you to engage with the airlines that fly those routes,  to reinforce the need for proper testing, checking, prior to boarding,” he said.

“The fact that it’s the UK, our nearest neighbour, means that they are regular flights.”

He added: “We’re placing a huge burden on people returning to Ireland, in terms of now testing.

“If that burden is there when it comes to getting PCR and antigen tests pre-departure, then it’s only fair that the system operates.

“You don’t want to have a situation where someone slips through with the Omicron variant undetected while there’s a huge burden placed on the rest of the population.”