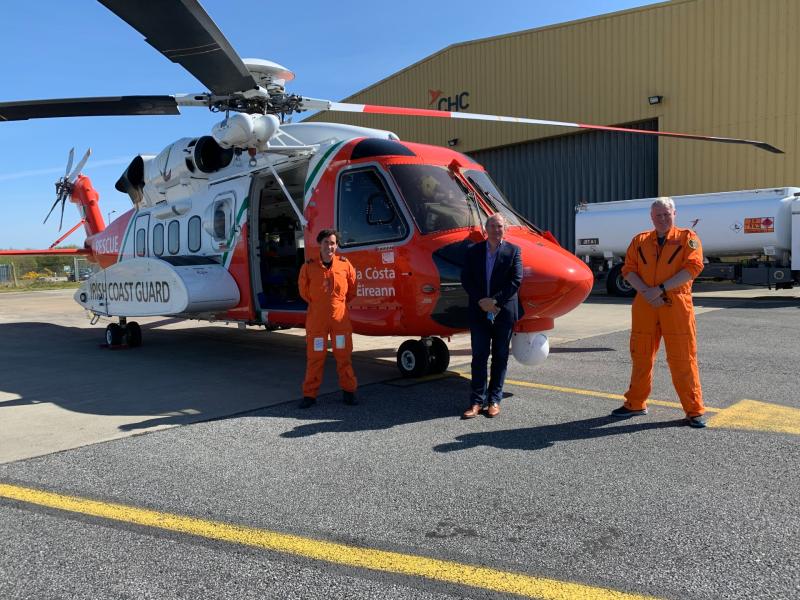 Deputy Matt Shanahan recently visited the Coast Guard helicopter search and rescue base at Waterford Airport, home to Rescue 117, the red and white Sikorsky S92 which is familiar sight in the skies of the South East.

Deputy Shanahan’s visit was as a result of ongoing discussions regarding a new national tender which is being developed by the Department of Transport and within which Deputy Shanahan believes there is a significant risk to retaining the present service in Waterford.

"Changes to the tender conditions or operator could jeopardise the 30 jobs that underpin the service at Waterford Airport, but just as importantly seriously erode the excellence and lifesaving record that rescue 117 has developed in Waterford over past decades," the Waterford TD said.

The Waterford base provides a 24/7 air sea rescue service along with hospital transfers and mountain rescue assists, with all routine technical maintenance capability required being carried out onsite at the Waterford base.

In the past four weeks alone the Waterford based service has completed the rescue of seven fishermen off Castletownbere in six metres waves while their boat was sinking, has been involved in search and tragic recovery operations in the Comeragh Mountains and Kinsale blow-hole incidents, and on Sunday last successfully rescued six people in Oysterhaven who were stranded at the base of cliffs as tides were coming in .

"This work is on top of the support cover she offers to Rosslare ferry sailings all the way to the French coast if needed, as well as the many hospital transfers that are required in the region along with critical case transfers to the children's and transplant hospitals in London," he said.

"Rescue 117 is also certified for heavy lift activity and being the most modern helicopter in the CHC fleet is fitted with the latest infra-red, heat sensing and high level spotlight search capability which adds to the range of operations she can carry out."

Deputy Shanahan highlighted that he has spoken with his Regional Group colleagues Deputies Verona Murphy, Wexford, and Deputy Michael Lowry, Tipperary, and confirms they are equally opposed to any reconfiguration that could affect the location or personnel attaching to the future South East service.

Deputy Shanahan outlined that when Tanaiste Leo Varadkar was Minister for Transport, "he suggested removing the PSO that supported Waterford as base of operations, which I was completely opposed to at that time. Given the development of the Waterford service into what it has become today, it would be unthinkable that any downgrade or reconfiguration at this base could be considered and I am completely opposed to any such considerations.

'I know my group colleagues and I presume all constituent TDs and Oireachtas members in the South East will resist any change in the support structures or resourcing presently applied to the Rescue 117 service and its Waterford Airport, base but I would like to receive assurances to same from the Minister for Transport on this issue as soon as possible," he added.