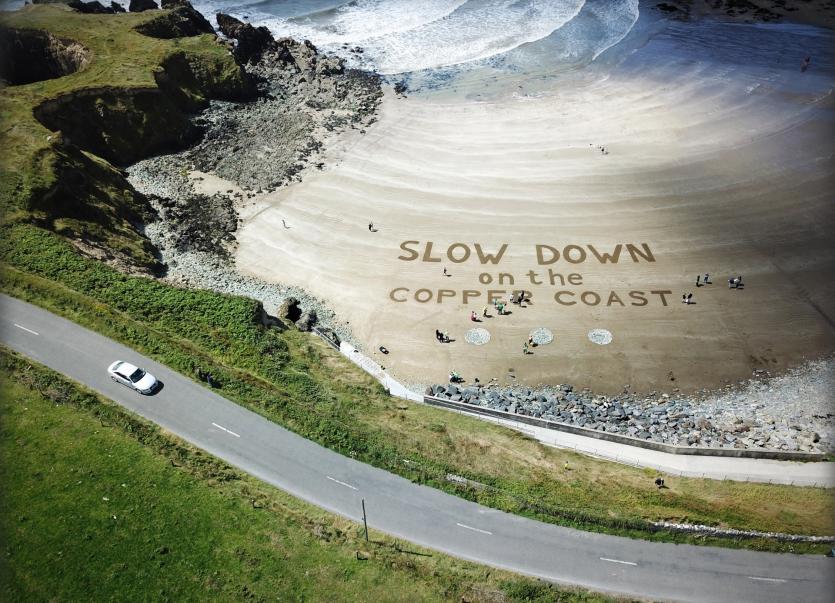 "Our community has come together around the issues of refuse management and littering on the Copper Coast, but it has become quite clear that the appetite for change will not stop there," said Mr Murphy.

The issue of speed and road safety is one that residents from across the Copper Coast have been raising and this was demonstrated by the community event with the aim of bringing about positive actions. During an extremely challenging time in the world, the community of the Copper Coast expressed hope with their sand art initiative.

The event brought laughter and joy whilst also bringing action and discussion. Families gathered rocks to make features at the front of the message being crafted into the sand, children demonstrated their sand art skills and everyone joined together in unity in a circle in front of a message that meant something to all of them.

Mr Murphy has called on Waterford City and County Council to conduct a full speed review and to introduce necessary traffic calming measures in the villages of the Copper Coast. "The speed in which drivers are travelling through our villages and passing our playgrounds is totally unacceptable. Based on the turnout and conversations being had here today, it is now clear that the issue of speed across all villages and roads in the Copper Coast is a cause of real concern for people in our community and that we are not willing to stand by and watch anymore," he continued.

The Guardians of the Copper Coast's community sand art campaign is asking drivers to 'Slow Down on the Copper Coast' and was facilitated by co-founder Mr Corcoran in an engaging and enticing way.

Mr Murphy had invited elected representatives from within the county to the event, asking for a collaborative cross party approach to solving the issue and supporting the calls he made. Deputy Matt Shanahan (Independent), Cllr Ger Barron (Labour Party), Cllr John Pratt (Labour Party), Cllr. Seanie Power (Fine Gael), Cllr John O' Leary (Fianna Fáil), Cllr Jim Griffin (Sinn Féin), and Green Party councillors Cllr Susan Gallagher, Tom Keith and Criostoir O Faolain were all in attendance at the event, which provided a fresh and open forum to tackle the issue of speed and road safety, a method that the group intends to use in all campaigns going forward.

"We have invited local politicians and representatives here today to express how serious we are about our concerns, but to also demonstrate that we want to approach these issues proactively. It is clear to see by the turnout here on Kilmurrin Cove today that the community of the Copper Coast are serious about not only the beauty and sustainability of our environment, but also the safety of those who visit," Mr Murphy added.