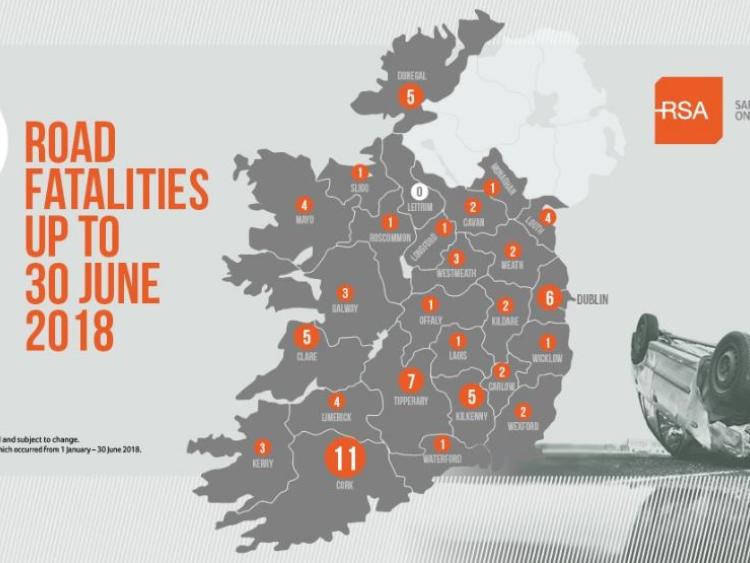 The Road Safety Authority (RSA) and An Garda Síochána have today published a provisional review of road fatalities for the first half of 2018.

The Road Safety Authority (RSA) and An Garda Síochána have today published a provisional review of road fatalities for the first half of 2018 which shows that one person died on the roads in Waterford during that time.

Throughout the country from 1 January to 30 June 2018, 78 people died on Irish roads in 73 collisions. This represents 3% more collisions and 3% more deaths compared to provisional Garda data for the same period in 2017.

The review found that up to 30 June 2018, 39 drivers, 12 passengers, 18 pedestrians, 3 motorcyclists and 6 pedal cyclists have been killed on Irish roads.

There were a number of revealing statistics in the review. April and June were the worst months for road fatalities with 17 deaths in each month while most the majority of fatalities have been male on roads with a speed limit of 80km/h or more.

The report also shows that there has been a reduction in motorcyclist fatalities with 70% less deaths than for the same period last year. The highest risk age group of drivers killed was 66 years and older and half of fatalities happened from Friday to Sunday.

The RSA has warned that, if the current trend continues, up to 78 more people could die before the end of 2018.

This is your reminder not to look back when driving. Allowing yourself to be distracted when driving on the roads could have very serious implications for you and those on the roads with you. Never drive on autopilot, distracted or impaired. pic.twitter.com/ItIzCyAZdx

Have you got a story for us? Drop us a line at news@waterfordlive.ie today!