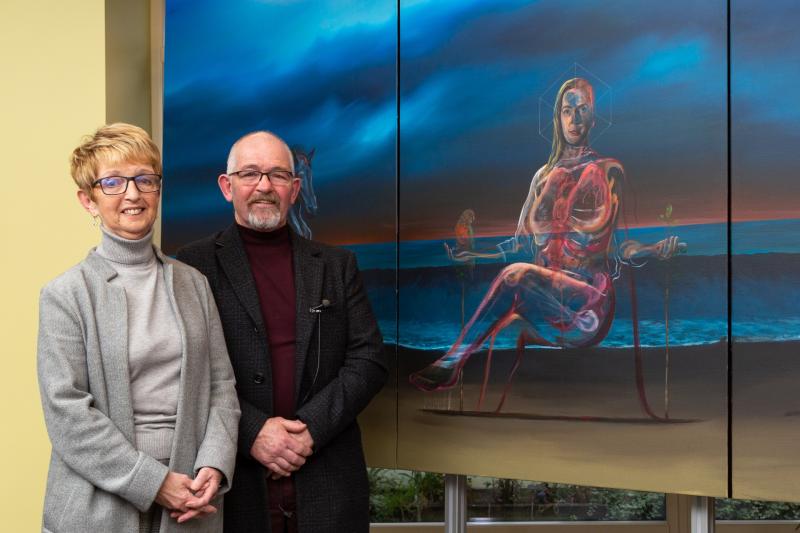 The Solas Cancer Support Centre will mark Cervical Cancer Prevention Week by opening its doors to the public. A portrait of healthcare campaigner Vicky Phelan is on loan to the Waterford-based charity for the month of January. Members of the
public will be able to visit the centre and view the painting on Saturday, January 29.

The Solas Cancer Support Centre has also teamed up with the Irish Cancer Society as part of efforts to raise awareness about cervical cancer and early detection. The Irish Cancer Society has been campaigning for the elimination of this disease
through high uptake rates of HPV vaccination and screening alongside access to life-saving treatments.

Director of Advocacy with the Irish Cancer Society, Rachel Morrogh said, ”We believe that the elimination of cervical cancer is within our reach, and vaccination against HPV as the leading cause of cervical cancer is a vital tool in this effort. We
would also urge women between 25-65 to accept their invitation to participate in CervicalCheck screening. Alongside this, it’s vital that we are all familiar with the signs and symptoms of cervical cancer to increase the chance of detecting the disease early, and benefiting from effective treatments.

Common symptoms to look out for are bleeding between periods, bleeding or pain during or after sex, increased vaginal discharge, pain in your pelvis or back and bleeding after menopause. If you have any concerns the Irish Cancer Society encourages you to make contact with your GP to get it checked out. Anyone with questions can also contact the Irish
Cancer Society and speak to a cancer nurse for free and in confidence by phoning 1800 200 700.”

The portrait measures 300cm by 150cm and was painted by Tullamore-based artist Vincent Devine and tells the story of Mooncoin native Vicky Phelan’s life in three panels.

The painting was commissioned by charity Heroes Aid and raised €58,000 to assist frontline healthcare workers during the Covid-19 pandemic. The painting was purchased by David Brennan, a family friend of Vicky Phelan.

“My wife and I agreed we had to make sure that this portrait of Vicky made it to Mooncoin," he said.

"The portrait had so much more meaning and I had imagined that its life needed to be dedicated to Vicky’s campaign of awareness and advocacy for women’s health and cancer patients.

"I had been in regular contact with Vicky but I didn’t tell her until the day of the auction that I was bidding on it and so when the hammer fell, she was the first person I called. It was an amazing time and it gave her and her family a lift when they needed it too. When we got talking about the ideas I had for the portrait, it was as if Vicky had read my script already, we were in tune with our visions for it. When I collected the portrait, its first stop was Vicky's parents' home in Mooncoin where it spent the weekend with her family, and neighbours came in to see it.”

Members of the public can view the painting in the Solas Cancer Support Centre on Saturday, January 29 between 10am and 3pm.