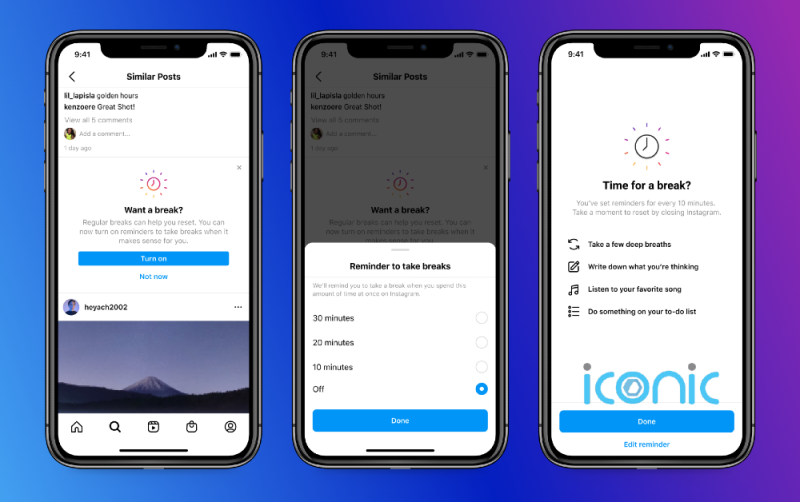 The move is part of new tools being rolled out to boost safety on the app, which also includes parental controls such as setting app time limits for teenagers, due for launch next year.

Instagram boss Adam Mosseri said the new Take A Break feature, which is launching in the UK on Tuesday, aimed to “empower people to make informed decisions about how they’re spending their time”.

The feature will be available to all users, but Instagram has spoken of specifically encouraging teenage Instagram users to take advantage of it, and the tool will also show them tips on how to “reflect and reset” away from the site and set reminders to take more breaks in the future.

In addition, Mr Mosseri announced the rollout of a further safety feature for teenage users which switches off the ability for people to tag or mention teenagers who do not follow them.

This follows a move earlier this year to make the accounts of teenagers private by default when they join Instagram, stopping adults from being able to message young people who do not follow them.

Mr Mosseri said the range of new features would “meaningfully improve the experience on Instagram for teens, parents and guardians”.

He revealed that the service was building a feature that would “nudge” users towards a different topic if the app notices they have been “dwelling on one topic for a while”.

In recent years, social media platforms have been criticised for their impact on the mental health and wellbeing of users, particularly teenagers, with many of the major sites since taking steps to introduce time limits and other features to combat these concerns.

“I’m proud that our platform is a place where teens can spend time with the people they care about, explore their interests, and explore who they are,” Mr Mosseri said.

“I want to make sure that it stays that way, which means above all keeping them safe on Instagram. We’ll continue doing research, consulting with experts, and testing new concepts to better serve teens.

“As always, I’m grateful to the experts and researchers who lend us their expertise in critical areas like child development, teen mental health and online safety, and I continue to welcome productive collaboration with lawmakers and policymakers on our shared goal of creating an online world that both benefits and protects many generations to come.”