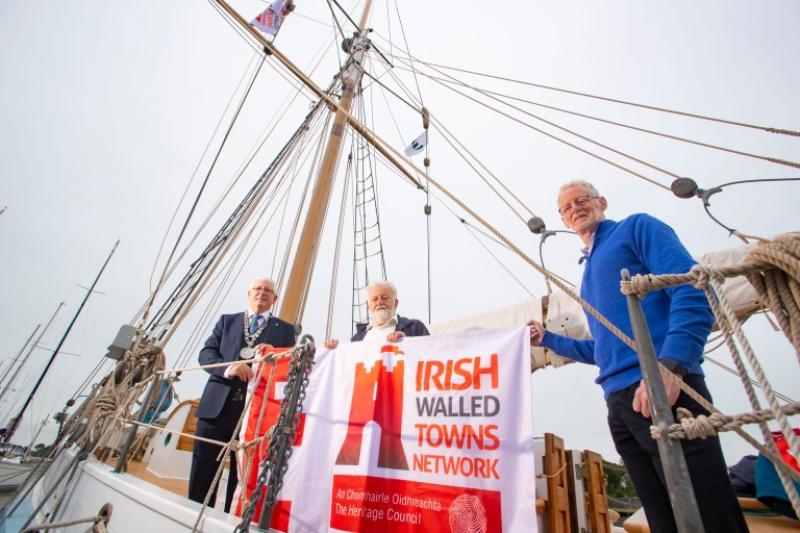 On Saturday, the Ilen, a 56ft trading ketch, travelled from Waterford to New Ross highlighting historic trading links between the two walled towns.

The voyage was part of the Heritage Council’s Irish Walled Towns Network ongoing efforts to highlight relationships around the Irish coast and beyond and to reconnect coastal walled towns.

The Irish Walled Towns Network was established by the Heritage Council in 2005 to unite and co-ordinate the strategic efforts of local authorities and communities involved in the management, conservation and enhancement of historic walled towns in Ireland. The IWTN works with local authorities and communities to make these towns better places to work, live and visit.

At present, there are 29 member towns located across Ireland (both North and South) and Waterford has been a member town for a number of years.

Rose Ryall, Conservation Officer, Waterford City and County Council was delighted with the visit of the Ilen to Waterford.  “The visit over the weekend really highlights the strong historic trading bonds between Waterford and New Ross.

"Since 2014, IWTN has funded a number of conservation and interpretation projects in Waterford City to the tune of €49,000 for vital conservation works to sections of the city walls.

"We’re looking forward to working with our Walled Towns Network on future projects,” she concluded.

Each IWTN member port town the ship visits exchanges a specially designed flag, with the next member town on the Ilen’s itinerary.

Mayor of Waterford City and County, Cllr. Joe Kelly, travelled aboard the Ilen to New Ross, along with Curator of Waterford Treasures, Eamonn McEneaney to exchange a specially designed flag, bearing the Irish Walled Town Network and Heritage Council logo with the people of New Ross.

Cllr. Kelly said, “As mayor of Waterford City & County, I am delighted to celebrate this historic occasion and represent Waterford and our shared maritime history with New Ross.

"As a region of rich marine heritage, it is wonderful to see two coastal walled towns being linked in this way, to celebrate the historic trading links between Waterford and New Ross.”