RACING: Your guide to Thursday’s action at Leopardstown 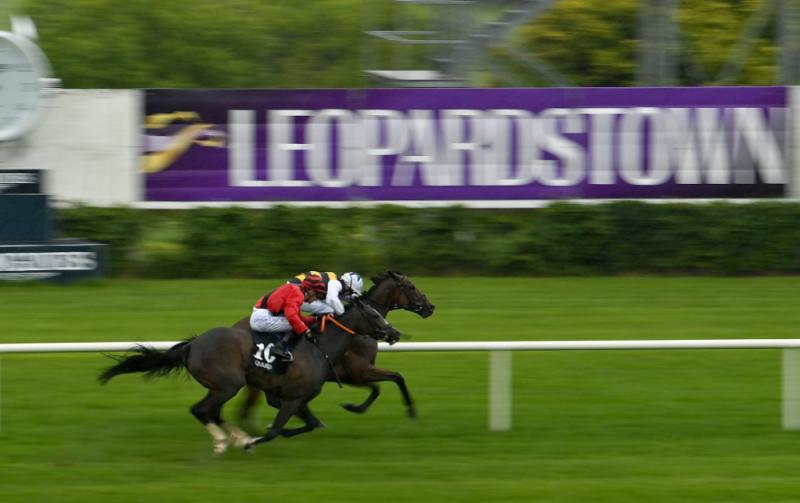 There is a cracking seven race card for punters to enjoy on Thursday evening at Leopardstown Racecourse. PIC: Sportsfile

There is a cracking seven race card for punters to enjoy on Thursday evening at Leopardstown Racecourse. The action gets underway at 5.20pm and concludes at 8.20pm.

The ground is currently Good, Good to Firm in places and watering is taking place to maintain the ground. We have previewed the pick of the action and you can find best odds on the SBK Sportsbook App

The undoubted highlight on the card is the €52,500 G3 Desmond Stakes over a mile. Seven runners go to post and they are headed by Boundless Ocean for Jim Bolger. The son of Teofilo powered on strongly to score at Leopardstown last month in the Meld Stakes and seeks further pattern race success in this event. He does look tough to beat having progressed with every run for Bolger and connections.

Ger Lyons is doubly represented in the race with Marbling and Juncture. The former was a narrow winner of a Group event cat Fairyhouse last time out and she is another capable of further improvement going forward. Juncture has only run six times in her career, but shaped with promise when second in a handicap at the Curragh last time out. She was thought good enough to run in the 1000 Guineas at Newmarket, but failed to fire on that occasion. However, she remains an unexposed filly who could put her best foot forward in this event.

Raadobarg has improved for the switch to Johnny Murtagh, winning his first two starts in fine style at the Curragh and Tipperary respectively. Eighth at Longchamp in Listed company on his penultimate start, he lost little in defeat when fourth in another Listed event at the Curragh last time out and clearly warrants respect in this event.

Voice Of Angels has been kept busy this term, but has placed form in Listed company at Killarney and is clearly one to note, whilst Charterhouse bounced back to form when plundering a handicap at Killarney on his latest start. Eskimo Comet completes the seven runners.

The €37,500 Listed Jockey Club Of Turkey Vinnie Roe Stakes has attracted a field of six runners for the one mile and six furlong event. They are headed by Bluegrass for Aidan O’Brien who finished a respectable third in the Dante at York behind subsequent Derby hero Desert Crown. He looked the type who would relish this step up in trip being a son of Galileo. Despite plenty of speed on the dam’s side, he does shape as a thorough stayer and is interesting in this event. Joseph O’Brien has two fascinating runners in the shape of Point King and Temple Of Artemis. Point King has impressed in two starts this year with a brace of fine victories at Fairyhouse and Leopardstown. He is clearly on an upward curve and is deeply respected along with Temple Of Artemis who makes his first start for Joseph O’Brien, having impressed with his gutsy attitude when scoring at Chester when trained by his father Aidan. The runners are completed by Manu Et Corde, Shajak and Simply Glorious.