Daragh Nolan speaks to the Champion trainer about his road to the top, family and Derby success 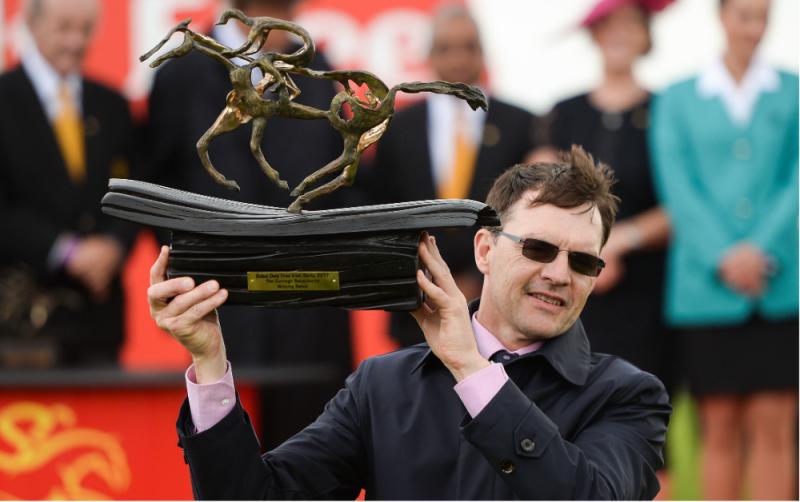 Aidan O'Brien lifts the trophy after winning the Dubai Duty Free Irish Derby with Capri, ridden by Seamie Heffernan, on Saturday at the Curragh in 2017, Photo by Seb Daly/Sportsfile

Aidan O’Brien has a litany of Irish Derby successes, 14 to be precise. It’s a long list and one that is hard to look back through and decipher which ones to ask the man himself about.

But I had an inclination that it wouldn’t be any of those 14 he’d have been most thrilled by.

Aidan came second in the 2018 instalment of the Irish Derby, and it might be fair to say no trainer has ever been happier to lose a Group 1 classic. His horse Rostropovich came up short against Latrobe, a 14/1 shot trained by his son Joseph and ridden by another, Donnacha.

Aidan always keeps his cool and calm demeanour but that was broken when discussing his sons combining for an Irish Derby win where he couldn’t help but grin with pride.

Aidan said of the day, “Latrobe was the most special for all of us. The two lads, Joseph to train it and Donnacha to ride it, it was an incredibly special day.

“We are always delighted if they can beat us because we know how tough it is and how hard it is for it to happen. We’re almost more excited for them when they win than we are for ourselves.”

I ask every trainer or sports person I speak to what their favourite win or day was in my interviews.

It seems like an obvious question, and one that anyone would ask them, but more often than not the answer will tell you something about that person.

The reason I include their favourite day as part of the question is because sometimes it isn’t the wins that get you truly excited.

Willie Mullins explained to me that the big wins, although great, often result in just a relief more than any sense of delight.
When I asked Noel Meade, a seven-time champion trainer with countless winners on his record about his favourite day out, he told me about an Epsom Derby where his horse, 200/1 shot, Sunshine Street came fourth at the 1998 edition of the race.

A day to remember
Few will remember the day Sunshine Street finished fourth, but Noel will — and Aidan has his own little-known day to remember. Not quite for the same reasons, but it has only looked even more special with time.

In late July 1991, a 21-year old Aidan went to the Galway Races and rode a horse called Sky Range to win a maiden hurdle.

The horse trainer was one Anne-Marie Crowley, with her first runner at a Galway festival, who would become Aidan’s horse training partner and wife.

It would be easy to forget when you look at the level of success in flat racing that Aidan holds today about how simply it all began.

“I worked for PJ Finn, Jim Bolger and then I met Anne-Marie. She had a trainers licence and was training with her dad. Then when Joseph was born we just said we changed it into my name and it has gone from there,” Aidan explained.

The pair continued to train horses out of Owning Hill stables in Kilkenny, which is currently in the capable hands of Joseph O’Brien’s Carriganog Racing.

“We were training three years at the time when Paul Shanahan met us one day and said that John and Sue Magnier wanted to know would we be interested in having horses in Ballydoyle and leasing it,” Aidan recalled.

That step in partially operating out of Ballydoyle instigated one of the most significant moments in Irish racing history as the O’Briens were asked if they would be interested in training solely for the Magniers. They accepted and from Ballydoyle began to build a dominant racing stable.

It was a great opportunity but an added pressure, as the head of Ballydoyle. But the weight of expectation was soon eased by their first Group 1 winner from their new home, as Desert King won the National Stakes at the Curragh.

“It was important that we got that straight away because it was our first year there,” Aidan said.

Ballydoyle would become a venue of unbridled success. But Aidan also acknowledges that the whole family operating from the stable held huge importance for the prosperity of his own and his sons’ triumphs in racing.

“We all lived there together. The lads have been part of our life throughout this journey. They were always used to hard work, ups and downs of it all and they stayed grounded because this life is hard work and they were always very aware of that,” Aidan said.

“They worked hard and we are delighted with how well they are getting on because it is day in and day out. It is unrelenting.”

I spoke to Aidan just days after he broke a 159-year-old record as his horse Tuesday provided him with a record-breaking 41st British Classic in a dramatic Cazoo Oaks on June 3.

But how do you arrive at this point?

“I was always fascinated by horses and my dad always had difficult horses to train at home. They would have been unmanageable for other people but he would get them and sort them out. We were used to working with horses’ minds really,” Aidan described.

Learning curve
“When I was 14 or 15 my dad would let me train four or five of horses at home and that was my first introduction to it and none of them made it to the track so I knew how difficult it was and how much we had to learn.”
Humble beginnings, training with his father in Killegney, Co Wexford, and built from there. Aidan O’Brien and his team on June 25 will be looking for, amongst many others, an incredible 15th Irish Derby win.