Gardaí respond as 2,000 students cause chaotic scenes in Irish city 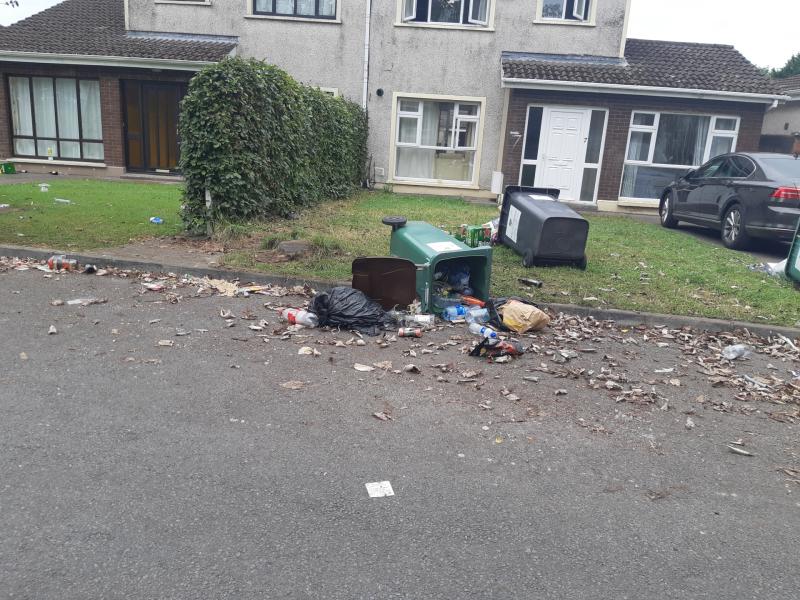 This photo was posted on social media by Cllr Sean Hartigan

GARDAI say they will continue “high visibility patrols” in the vicinity of the University of Limerick and surrounding residential areas after “chaotic scenes” unfolded in one housing estate involving up to 2,000 students.

According to Cllr Sean Hartigan, “it was impossible to walk around the estate” the following morning due to broken glass and “the volume of cars was off the Richter scale.”

“The situation is out of control there,” said the Limerick City East representative who is calling for the University of Limerick to introduce an off-campus code of conduct to tackle the issue for once and for all.

The situation at College Court housing estate - which is located close to the University of Limerick - unfolded on Monday night prompting a number of local residents to contact Cllr Hartigan.

"When I arrived in the morning to inspect, the place was destroyed,” said Cllr Hartigan.

"I was notified of an old woman who couldn't make her usual walk through Elm Park due to the amount of glass covering the footpath," he added.

The issue of multiple occupancy and high density student housing was raised by residents in Milford Grange housing estate, following the night of partying.

They are seeking a number of behavioural codes to be implemented in an off-campus policy similar to that seen by UCC. Their hope is that a designated person will oversee student behaviour, that appropriate sanctions will be brought in and that a UL staff member will liaise with residents in off-campus housing estates.

The residents group flagged a number of public order incidents that have taken place this week. These include a student urinating in the garden of a young mother's residence shortly before she took her children to school as well as casual parking that has presented difficulties for those with buggies or elderly individuals using walking aids.

“With a lack of student accommodation available, the problem is only going to escalate."

He added that the increased demand set against a lack of supply is pushing students further out to residential housing estates in areas like Annacotty.

He stressed the need for an off-campus code, citing his attempt to bring a motion on the issue to council in July with the assistance of local residents and landlords, “but UL haven't engaged."

Cllr Hartigan's motion was referred by the local authority to last Friday's meeting of the Limerick Joint Policing Committee where it was formally agreed to raise the issue with the UL President Professor Kerstin Mey.

In response to this week's incidents as well as large gatherings in College Court, a spokesperson for UL stated: "The University takes any behaviour that disrupts the campus and local community very seriously and will address matters in accordance with existing procedures outlined in the UL Student Code of Conduct."

Elsewhere in the city this week, one resident highlighted a number of public disorder incidents on Henry Street where watermelons were smashed on cars and across the pavement.

Director of Strategic Marketing at Mary Immaculate College Ciara Ní Shúilleabháin told the Limerick Leader the incident on Henry Street was brought to their attention via social media, and they have since made contact with the students’ union and community garda to investigate if MIC students were involved.

She added that MIC "strongly condemns this type of behaviour" and will not tolerate incidents of this nature from members of its student cohort.

In response to the incidents across the city, Henry Street garda station released the following statement: