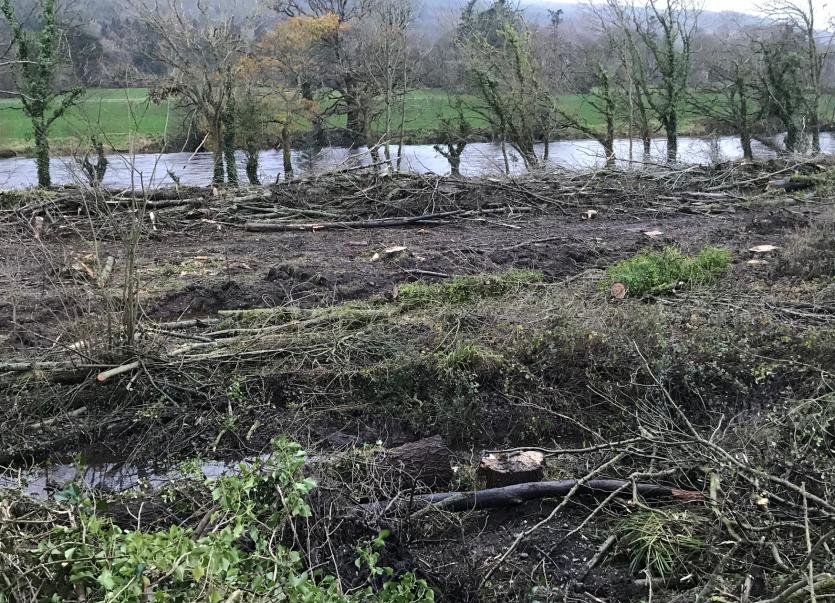 Clearfelling at a special area of conservation along Suir Blueway in Kilsheelan, Co. Tipperary has been described as a “crime against nature”.

Local resident Cyril Helnwein has slammed Coillte for the “needless destruction and violation” of the woodland area, which has seen a series of poplar trees cut down in recent weeks.

According to Coillte, it was contacted by the Tipperary County Council and Kilsheelan Tidy Towns requesting assistance with the removal of the trees, located alongside the N24 Limerick to Waterford route and the nearby Suir Blueway, as they posed a “serious public safety hazard”.

However, a Tipperary County Council spokesperson has said that the Council “did not issue any request for the felling/removal of trees in the manner as has happened at the location and fully refutes any assertion in that regard”.

The Council spokesperson said Coillte was requested, on the grounds of public safety, to prune/remove trees on the verge and/or in the immediate vicinity of the N24 at Kilsheelan Woods which were at risk of falling onto the road in bad weather events and which posed a hazard to vehicular users.

PROTEST
Mr Helnwein, who protested as workers carried out the felling on December 18, said Coillte’s actions at the protected woodland were “bad for the environment”.

“They decided on clearfelling the area, which is roughly the size of a GAA pitch. They circumnavigated all environmental laws and rules and decided completely arbitrarily that all the trees were dangerous, which is complete nonsense,” Mr Helnwein said.

“We have problems with the River Suir where certain fish aren’t able to come in anymore because of poison in the river and there was a crayfish plague in Clonmel. All these actions have knock-on effects. It might not seem drastic at the moment, but it’s important we look after our environment.

“A week after the felling the whole area was flooded when we had heavy rain and it was like a swamp. Trees suck up water and turn it into oxygen for us to breathe,” he continued.

‘WAR ZONE’
Mr Helnwein said his protests inadvertently saved between 20 and 30 other trees from being felled, and that he will protest again should the workers return to finish the job.

He welcomed plans to plant new trees in the area, but said it must be done in a manageable way. “It’s absolutely shocking what has been done and it’s like a war zone now. You can’t just go into a wildlife habit that is protected and behave like that, and then come up with the excuse that it’s dangerous and new trees are being planted anyway. That to me is a cop out,” he argued.

“I completely welcome a managing and thoughtful cleaning up of the woods. If nature is left to its own devices there’s always going to be a fallen tree and a branch broken off somewhere. Nature is wild and can look a bit messy, but that’s nature,” he added.
Tommy Lonergan of Kilsheelan Tidy Towns said the group is happy that the “dangerous” trees have been felled. However, he noted that the group had no prior knowledge of the clearfelling operation that was subsequently undertaken.

“There were trees falling onto the road and they were a danger. We thought only the trees near the road would be cut,” Mr Lonergan said.

He said Kilsheelan Tidy Towns would like to see the area cleared up as soon as possible. “It won’t help us when the judges come around and see the way it currently is. It’s like a war zone down there at the moment and we fear that nothing might be done with it for months. It would be better to have it finished off and replanted,” Mr Lonergan added.

Cllr Molloy said he has received numerous calls from concerned local residents, and that the community should have been consulted before the action was taken.

Describing the area as a “blank canvass”, he called on Coillte to plant native Irish trees, bluebells and white garlic in the area.

“It is my understanding that most of the trees that were destroyed were softwood trees and not native to Ireland,” he said.

“This is an opportunity to create a new wonderland of native Irish trees that would completely transform this beautiful part of Tipperary and that would be a huge asset to biodiversity,” Cllr Molloy added.

‘HUGE SETBACK’
Cllr Michael Murphy described the clearfelling as a “huge setback” for the village’s long-term vision of having this special area of conservation designated as a proper amenity forest with trails linked to the provision of biodiversity education.

“It's very important that remediation happens at the earliest opportunity. Such remediation should include the removal of any trees already cut down and the replanting of the area with native hardwoods, ideally reasonably mature hardwoods rather than saplings. Such work should be carried out in consultation with Kilsheelan Tidy Towns and other relevant agencies,” Cllr Murphy said.

FELLING REPORTED
Friends of the Irish Environment (FIE) has reported the clearfelling to Minister of State with responsibility for the National Parks and Wildlife Service Malcolm Noonan, Minister of State for Land Use and Biodiversity Senator Pippa Hackett, the Forest Service, and the gardaí .

“An entire swatch of this EU protected woodland has been felled without licence or the relevant consents. The line of poplars along the roadside may have posed such a risk, but that does not justify the clearance of the woodland between the river and the road,” a spokesperson for the environmental charity said.

“Landowners are only empowered to remove trees on the grounds of safety without consent if they are within 10 metres of the public road. The Forestry Act 2014 specifically states that Coillte does not have the power of a ‘public authority’ when seeking exemption from felling licences.”

The FIE spokesperson said the public is well aware of the dangers posed by entering woodland areas.

The FIE spokesperson said residents valued this particular woodland as it was, and that contact with the relevant ministers seeks to ensure that no further felling of the woodland takes place until the necessary assessments are done and a licence is issued.

The spokesperson added that plans to replant trees must be approved by the National Parks and Wildlife Service.

The Coillte spokesperson said: “With the risk of further winter storms, Coillte acted to remove the risk by felling a number of these trees as requested by Tipperary County Council.

“For standard tree felling operations, Coillte would always seek to apply for a felling license. However, in line with our safety policy and with the Department of Agriculture Food and Marine's procedures, if any of our trees pose a risk to the public’s health and safety they can be removed without delay.

“Coillte consulted with the Forest Service who indicated that tree removal should proceed and that a traffic management plan be implemented to ensure no risk to the public would arise.”

The Coillte spokesperson said the tree felling operation will be fully completed in the coming days.

“This will see Coillte create a safe green space by planting a series of oak, scots pine, birch, rowan and holly saplings in tree shelters to replace the removed trees and to enhance the local biodiversity of the area for future generations. Options for pollarding some of the remaining trees are being considered,” the Coillte spokesperson said.

“We are highly aware of how important the forest is to local residents for recreation and amenity. However, we also have a duty to ensure our forests are safe for people to access all year round,” the Coillte spokesperson added.