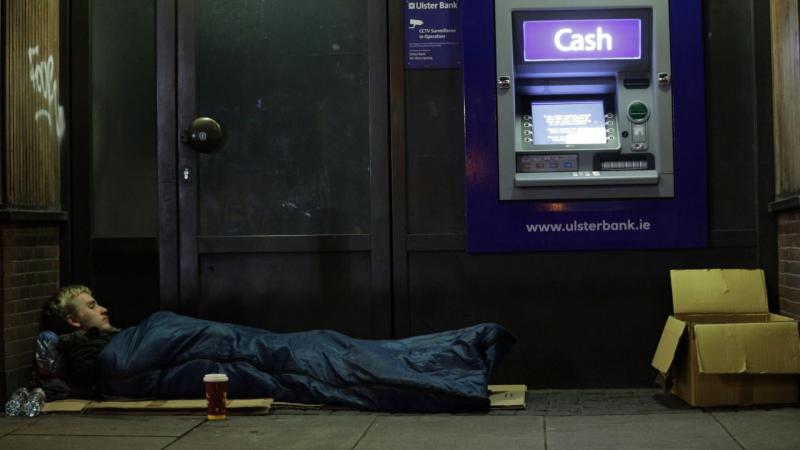 This Monday night, RTÉ Investigates follows the lives of rough sleepers and homeless hostel users, examining the challenges they face and the difficulties in getting off the streets in a powerful new RTÉ One TV documentary.

In the lead up to Christmas, RTÉ Investigates documented the lives of people sleeping rough in Dublin City. The programme also examines the role of emergency hostels as a response to the problem, revealing how some can’t get into the hostels while others believe the streets are safer.

The number of rough sleepers in Dublin fluctuates. The most recent count by Simon found 139 people sleeping rough in the city over one week in November.  Those that are sleeping rough are supposed to be able to get an emergency hostel bed by ringing a freephone number operated by the Dublin Regional Homeless Executive (DRHE) – these beds are for those in crisis. Rough sleepers from outside County Dublin being denied access to an emergency hostel bed in the city has caused some controversy.

On December 7 last, Minister for Housing Darragh O’Brien told the nation on RTÉ Radio 1's Morning Ireland that nobody is being denied a hostel bed. Days later RTÉ Investigates filmed with homeless people who tried ringing the DRHE looking for a bed for that night to be told they couldn't help them. That they would need to contact their former local authority, despite being on the streets in Dublin on a winter's nights during the pandemic.

There were 75 beds empty the night one of the homeless men called the freephone number, but he was told he could not access a bed.

In the programme, Minister for Housing Darragh O’Brien offers his apologies and says this should not have happened. The DRHE said it looks at everybody on a case by case basis and use their maximum discretion. The DRHE also pointed out is “not responsible for providing homeless accommodation for everybody in the country”.

Hostels remain a key and a costly component of the State's response to homelessness. In 2016, the DRHE spent almost €10 million on private emergency hostels. By 2019 this spend had shot up to almost €22 million.

At any one time there are roughly 3,000 homeless people availing of emergency hostel beds in Dublin. Some are well run and safe, but there are concerns about others.

Inspections of hostels are being carried out since February 2019. These are done by the local authority and not by an independent third party. RTÉ Investigates tried to access the records through Freedom of Information but were refused.

In an interview with RTÉ Investigates for the programme, Minister for Housing Darragh O'Brien said: "Where they can be made public, they should be. I haven’t, and I don’t have any difficulty with that. I think we need to make sure that we, that our standards are the best they possibly can be."

RTÉ Investigates undertook a detailed survey on the streets of the capital, in association with Amarach Research, to try to understand the challenges faced by people who don't have a secure home. They spoke in confidence with 80 people who either sleep rough or use emergency hostels. Some had been living this way for months, some for years.

"It’s shocking. Very often we look at people who are homeless and we see the drug addiction they have and we think that that’s the cause of their homelessness, but in actual fact many of the problems that people who are homeless have are consequences of their homelessness and just the sheer misery and the sheer mental pressure of living in circumstances where you have no home and the security that should go with a home," says Mike Allen of Focus Ireland.

Dan’s story
Dan Orlovs has contended with more than most 20-year olds. At the age of 10, able to say little more than his name and age in English, he moved to Ireland with his mother. At 15 years of age he became homeless. Dan and his mother became estranged. For the next four years he slept on friends’ couches, before ending up living on the streets of Dublin in July 2020.

Nothing could have prepared him for his first night sleeping rough in a doorway close to Store Street Garda Station in Dublin’s north inner-city.

“At the start – the first two to three weeks in Dublin – I wouldn’t beg,” Dan told RTÉ Investigates.

“Then, three weeks in, I said to myself: ‘I’m sleeping in a doorway. I’m not washing myself. It’s no harm.’ And then I started begging.”

Dan had smoked cannabis before, but he started smoking heroin for the first time soon after he began sleeping rough on the streets of Dublin, partly because it dulled the pain of an abscess in his mouth. But taking drugs also helps him while away the days on the streets. He is far from alone in becoming addicted to heroin only after becoming homeless.

“One of my biggest fears is that my addiction is going to get worse in a couple of months. My biggest fear is what’s going to happen the next three months if I don’t start doing something tomorrow,” Dan told RTÉ Investigates in October.

Dan’s aspirations are modest. All he wants is a home, his own bed, a job and “something to look forward to every day,” he said.

Near the end of October, Dan decided to stop using heroin completely – going “cold turkey”. “When you’re coming down off heroin, you can go to a doctor and get prescribed methadone, but then you’re hooked on meth. But with cold turkey, you’re fighting the sickness yourself,” Dan said.

Fever, diarrhoea and body aches are just some of the symptoms of heroin withdrawal. Managing this when on the streets without access to a bed or the basics of a toilet, shower or heat is very difficult.

But because his last registered address was in Kildare, Dan is refused a bed in a Dublin hostel. “To be helped out by us, you need to have some local connection to Dublin. We are not allowed to help people from Kildare,” an operator tells him on the phone.

Amid his withdrawal from heroin, Dan concluded that securing a hostel in Kildare was his best option and travelled back to the county. Despite the temptations and trying to go cold turkey, Dan continues to try and improve his situation. In December, more than a month after first entering the Kildare hostel, Dan secured a temporary Christmas job.

But living in a hostel is difficult for those trying to hold down a job. Dan’s hostel is in the middle of the country. The hostel provides a shuttle bus, but because of Dan’s work timetable he cannot avail of the service. Sometimes he can get a lift from hostel staff, but some mornings he must make the 90-minute journey to his job on foot. “I had to leave at five o’clock in the morning. At that time, there are no buses going,”

Six weeks after RTÉ Investigates first met Dan, he is still struggling with his heroin addiction. But he is currently working with hostel staff with a view to securing a place of his own through the Government’s Housing First Programme.

Watch RTÉ Investigates: Stuck in the Rough this Monday at 9.35pm on RTÉ One and RTÉ Player.