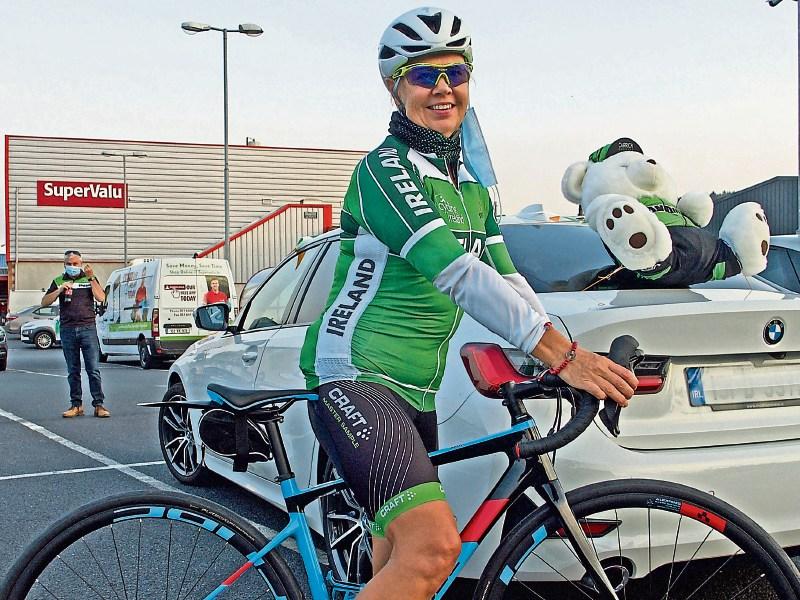 Sam Bennett rang home on Sunday evening to share his joy at his Tour de France success with his delighted family, who watched his heart stopping sprint on the Champs-Élysées from their Carrickbeg home.

His mother Helen said when Sam called her he was sitting in the back seat of the car with his wife Tara.

“He turned his phone and showed me the view out the back window of the Eiffel Tower, which was all lit up. He told me it had been lit up green that night.”

Helen then brought her phone to a  waiting group of relatives and  friends  gathered in the courtyard outside the Bennett family home in Carrickbeg and showed them Sam’s face. “Everyone started cheering; that was so exciting,” she recalled.

Helen said she can’t find the words anymore to describe how excited and proud she felt of Sam after watching him win his second Tour de France stage and the maillot vert jersey.

“It’s just surreal. We are still on cloud nine and soaking it all in. This is something he has always dreamed of and it’s definitely a dream come through for him. To actually win on the Champs-Élysées is just phenomenal.”

Winning the Tour’s green jersey was particularly special for Sam as it emulated  the feat of his cycling hero and fellow Carrick man Sean Kelly.

Helen recalled that Sam used to play with Sean Kelly’s children  while on holidays in Clonea in county Waterford as a child and back then knew Sean only as the twins’ dad and the man whom the Sean Kelly Sports Centre in Carrick was called after.  She said Sean Kelly’s achievements were really brought home to Sam when he became a professional cyclist himself and competed in races Sean Kelly had won a generation before him.

While she is disappointed at not being able to be in Paris for her son’s special moment, she is philosophical and believes, in a way, they were better off at home given the Covid-19 restrictions.

She watched Sam’s thrilling final stage finish with her husband Michael, 24-year-old son Scott, Sam’s mother-in-law Gaye Fogarty and brother-in-law Shayne. Sam’s granny Sylvia Bennett  joined the post-race  celebrations.   She sported a shamrock on her cheek and was “super excited”, laughed Helen.   Helen has been overwhelmed at the way the people of Carrick-on-Suir have got behind Sam. She cried the first time she saw the banners and posters supporting her son that sprung up around the town.

The Clonmel woman says she can see the  “utter happiness” in her son in the wake of his Tour de France successes. She said Sam just had a few drinks on the team bus on Sunday after the race. It was a quiet affair due to the Covid-19 restrictions.  Sam and his wife Tara have  returned to Monaco where they are currently based and he will have a number of rest days before returning to racing. Helen said Sam hasn’t any imminent plans to return home to Carrick-on-Suir due to his racing schedule but he hopes to visit before the end of the year.

“Normally he would  wind down in October and November, then it would be into training camps but now racing is continuing into those months,” she explained.